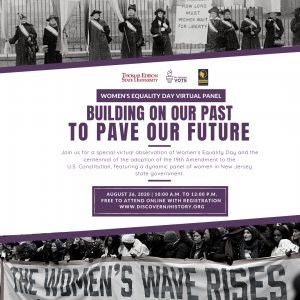 Building on Our Past, To Pave Our Future

View a full recording of the event here: https://bit.ly/2QrcHEJ

August 26, 2020, Women’s Equality Day, makred 100 years since the adoption of the 19th Amendment to the U.S. Constitution. NJ Women Vote commemorated this significant anniversary by inviting New Jerseyans of all ages to celebrate the women who have led and continue to lead our state government.