With a Lot to Lose, Playful Silk Workers Strike in Paterson 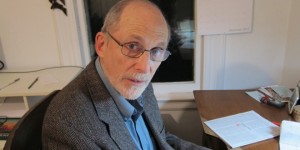 The Paterson silk strike of 1913 was a lot of fun. We don’t usually think of long-ago strikes as fun. The stereotype of early twentieth-century labor conflict is of desperate starving workers, laboring in sweatshops or mines, workers who in Marx’s phrase had “nothing to lose but their chains.” Nothing could be further from the reality of the Paterson silk strikers. 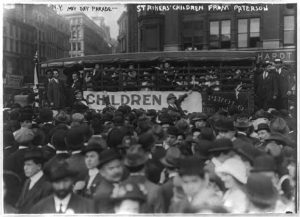 Paterson silk strikers and their children in May Day parade, 1913. Courtesy of Library of Congress, LC-USZ62-52620.

Most Paterson silk strikers were weavers –roughly 15,000 of the 23,000 strikers. Silk weavers had created a good way of life. Over decades of struggle in Paterson, they had established a nine-hour day, good working conditions, good wages, and the right to picket and strike. Some weavers owned houses in Paterson or its suburb of Haledon. Many hoped their sons and daughters would go into the silk and become weavers too. It was skilled work and they were proud of their skill and eager to protect the gains they had won. Unlike the Marxist stereotype, to which many of us unthinkingly subscribe, these workers had a lot to lose.

Especially at first, the Paterson silk strikers of 1913 were playful, almost joyful. They demanded an eight-hour day. One banner said: Eight Hours Work, Eight Hours Rest, and Eight Hours Pleasure. At the women-only strike meetings led by Elizabeth Flynn of the Industrial Workers of the World, birth control was openly discussed as a way to have fewer children that were better cared for. At the climax of the strike, after three and a half months, over 1,000 strikers performed a play of their strike in Madison Square Garden. Strikers vied with each other to be in the cast; thousands who were not in the play walked to New York to be in the audience. In the first episode about the beginning of the strike, the silk workers ran joyfully from the backdrop of a mill. An audience member from New York captured the moment:

A faint free cry rises slowly, to deafening hosannas from a thousand throats as the workers rush from the mill. They wring their hands, they shout, they dance, they embrace each other, in a social passion that pales individual feeling to nothing. They are a mad mob, glad and beautiful in their madness. They sing the Marseillaise. The strike is on!

At a time when the strikers had indeed become hungry, this play in Madison Square Garden –called the Pageant of the Paterson Strike—recalled the joy and playfulness of the first day. They were never too hungry to play. We forget their joy and playfulness. We think of them pityingly, condescendingly; we shake our heads over the bad old days when employers could do what they wanted and workers suffered indignities. As if we have achieved freedom at work. As if our workplaces are models of democratic decision making. In their playfulness, solidarity, hopefulness, and joy, the Paterson strikers have a lot to teach us.

Steve Golin is the author of The Fragile Bridge: Paterson Silk Strike, 1913, and The Newark Teacher Strikes: Hopes on the Line. He is Professor Emeritus of History at Bloomfield College and is working on a third book about four women who invented the 1960s.