The Founding of New Jersey 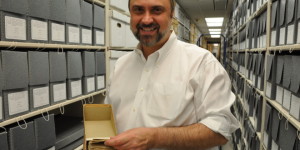 Royalty in exile, nobility in drag, provincial power grabs, lions, wolves and crows, one unlucky bastard and a beheading… No, I’m not talking about the HBO series Game of Thrones. I’m talking about the founding of New Jersey! As we celebrate this 350th anniversary year, those of us in history fields—and perhaps a few folks on the Isle of Jersey—are delighted to see Sir George Carteret and John, Lord Berkeley inch their way into household-name status. These men were, of course, the original grantees of a tract “Bounded on the East part by the maine Sea and part by Hudsons River and hath upon the West Delaware Bay or River.” We know and love this turf today as the Garden State. 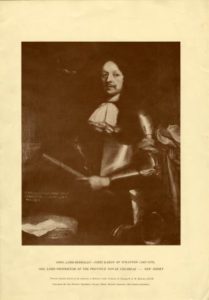 The two noblemen received clear title to it (or so they thought) on the 24th of June, 1664. Carteret and Berkeley had demonstrated their faithfulness to the House of Stuart during the period of English civil war that resulted in the decapitation of King Charles I in 1649. Both distinguished themselves militarily against the Parliamentarian opposition. Carteret had defended Elizabeth Castle on his native Isle of Jersey until 1651, making it the last fortress to fly the royal banners during the “interregnum” in which Parliament controlled the government and the king’s sons were in exile. Carteret had also proclaimed Charles II King of England at “old” Jersey’s capital city of St. Helier soon after his father’s execution.

Following the restoration of the monarchy in 1660, Charles II and his brother James, Duke of York, rewarded Berkeley and Carteret with appointments to the Privy Council, shares in the American colony of Carolina in 1663, and then a joint proprietorship of part of the Duke’s Mid-Atlantic territory expected to be surrendered by the Dutch. In honor of Carteret’s bold wartime actions, the place was to be called “New Jersey or New Cesarea” (Cesarea being another name for Jersey). The new proprietors’ rights to govern and own New Jersey were challenged from the start by the Duke’s governors in New York, starting with Richard Nicolls. Nicolls had been sent to capture New Netherland and did so in September 1664. Soon afterward he began authorizing settlement in northeastern New Jersey (a.k.a. “Albania”). This created conflict between East Jersey’s first English settlers and the colony’s proprietors, who independently chartered New Jersey and commissioned Sir George Carteret’s cousin Philip Carteret as its first governor.

The contention between New York and New Jersey continued for decades. After a short-lived re-conquest of the former New Netherland territory by the Dutch in 1673-4 (calling into question the validity of the grant to Berkeley and Carteret), Governor Edmund Andros in New York attempted to annex “the Jerseys.” When Philip Carteret refused to require ships bound for East Jersey to first pay customs in New York City, Andros had New Jersey’s governor beaten, arrested, and brought to trial. The accusation was that Carteret “without any lawful Right, Power or Authority with Force and Arms, riotously and routously … hath presumed to exercise Jurisdiction and Government over his Majesty’s Subjects …” While Philip Carteret was acquitted, the court still ruled that he had no authority in New Jersey. Before he died in 1682, he saw Andros recalled from his post in New York. He did not live to see the Duke of York ascend to the throne as James II in 1685 and Edmund Andros become royal governor of the Dominion of New England, exercising control over New Jersey for several years from his seat in Boston. Nor did Philip Carteret live to see the “Glorious Revolution” in England that led to King James’s abdication, the arrest of Edmund Andros in Massachusetts, and an end to their claim to New Jersey. By then, however, the inhabitants of New Jersey were increasingly restless and riotous themselves due to various political and economic issues.

In 1702, East and West Jersey’s proprietors successfully surrendered their governance rights to the Crown while retaining the land rights. From that time until the Revolutionary War, a royal appointee would govern the colony. Our book-end royal governors tend to be the best known. The first was Edward Hyde, Lord Cornbury, infamous for corruption and scandal. He was accused of many “evils” by his detractors—among them, dressing in women’s clothes on a daily basis to emulate his cousin, Queen Anne. Our last royal governor was William Franklin, natural son of the great patriot Benjamin Franklin. When William accepted his commission in 1762, he was a politician of great promise. Yet he found himself on the wrong side of a revolutionary tide that would sweep him out of office and away from his homeland, to end his days in England, disowned by his American father and his son as well.

As for the lions, wolves and crows, I wasn’t  just trying to get your attention. New Jersey declared war on these public enemies in 1709 by passing An Act for destroying of Wolves, Panthers, Crows & Black-birds. A slain mountain lion or wolf was worth 15 shillings while 3 pence was the reward for a crow or dozen blackbirds. Think about that the next time you go out for an evening stroll, unmolested by fang and paw!

New Jersey’s colonial history is a fascinating topic that we tend to think has been thoroughly analyzed, if not overly rehashed. In reality, this is far from the case—partly because the proprietary records only became accessible to the public during the last 16 years. Consequently, at the State Archives we are still unpacking boxes of documents from the 1600s. As we sort through these papers, more history will unfold, literally. Who knows? There may be dragons… But even if you have to settle for slightly tamer non-fiction, I say “explore New Jersey history.” It’s surely a cheaper thrill than cable!

Joseph R. Klett is Executive Director of the New Jersey State Archives, in the Department of State. He was born during the state’s Tercentennial and first visited the Archives as a genealogist soon after the country’s Bicentennial. He joined the fulltime staff of the Archives in 1989. He has served on the board of trustees of the Genealogical Society of New Jersey for 26 years, and is a past editor of The Genealogical Magazine of New Jersey.