The Fight to Preserve Cape May

Over the years, Cape May has garnered many nicknames. Monikers like “Cool Cape May” and “Jewel of the Jersey Shore” are routinely used to describe the small hamlet that was America’s first resort town, hosting vacationers since the late 1700s. Visitors from around the globe are attracted to the ambiance and allure of the city filled with meticulously restored, centuries-old buildings.

The Cape May of today bears a striking resemblance to the Cape May of a hundred years ago, right down to the intricate earth-toned paint schemes that adorn the buildings. However, the story of how that happened is not one of continuity; it’s one of perseverance and a bitter, mid-20th century struggle between proponents of urban renewal and those who championed preservation. 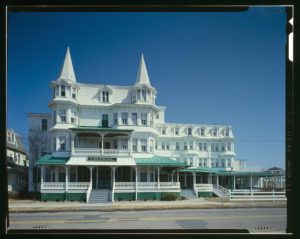 Colonial Hotel in Cape May, NJ. Courtesy of Library of Congress, HABS NJ,5-CAPMA,5–4.

By the late 1950s and early 1960s, Cape May had lost its luster and many of the city’s old Victorian and Colonial homes were in a state of disrepair. Local residents were struggling to make ends meet, so much so that some had taken to tearing up the floor boards in their homes to burn for heat in the winter. Tourism had sharply declined as visitors cast aside the Cape in favor of more modern resorts like Wildwood and Ocean City.

In 1961, Mayor Walter C. Wright and his administration initiated the first urban renewal campaign in an attempt to revitalize the city. They disagreed with the naysayers who claimed the old hotels were old-fashioned and obsolete. The mayor felt the hotels could be restored to their former glory and used as a tool to create a new image for Cape May that focused on the city’s history.

The mayor directed Dr. Irving Tennenbaum to install antique gas lamps in the historic district to begin the process, but midway through that first project, disaster struck. Cape May was battered by the infamous Ash Wednesday Storm of 1962, a nor’easter that ripped the beachfront apart. Roadways, the boardwalk, the convention hall, and much more were all lost, putting an immediate hold on urban renewal as the city tried to recover.

In 1964, Mayor Wright left public office. His successor, Mayor Frank A. Gauvry, shared Mayor Wright’s idea of using the city’s history to bring back the tourists, but felt that modern visitors didn’t want to stay in antiquated hotels. He believed the key to revitalizing Cape May was to emulate Wildwood and demolish the old buildings around town, replacing them with modern motels and hotels that would appeal to vacationers.

City officials proposed a plan to turn Cape May into a sort of Victorian theme park.  The cornerstone of their design was the creation of a 77-acre “Victorian Village” in the center of town, made up of a pedestrian mall, shopping center, and faux Victorian facades.

Despite the emerging national preservation movement in the mid-1960s and the passage of the National Historic Preservation Act in 1966, the Federal Department of Housing and Urban Development chose to back the city’s design. In 1967, HUD approved a five-year plan, financed by $3 million of federal funds.  As a condition of the grant, the city was obligated to hire an architectural historian to profile Cape May and catalog the buildings.

When Carolyn Pitts was hired, city leaders had no idea that she was a strong advocate for preservation, or that she had a history of vacationing in Cape May.  Pitts took the job and went about her work, though she grew more and more disturbed with each demolition.

Rather than renovating  old structures, the city was simply knocking them down with a bulldozer.  The remains of all those buildings were then trucked to the elementary school and temporarily stored in big piles on the front lawn, where they were burned in bonfires to save room in the city dump. After the city demolished the circa 1884 Elberon Hotel to make way for a modern motel, Pitts found out that the historic Emlen Physick Estate was next.

Over the objections of the Historic District Commission, the city planned to completely clear the property and then hand it over to developers.  The thought of the grand mansion being replaced by a modern subdivision was too much for Pitts.  She felt she needed to take action and prevent any more history from being lost to the bulldozers.

Pitts met with local cottagers who she knew were equally preservation-minded and they founded what would later become the Mid-Atlantic Center for the Arts (MAC). Their main goal was to save the Physick Estate, but Pitts and a cottager named Edwin C. Bramble thought bigger. In December of 1970, the duo managed to get the entire city of Cape May listed on the Department of the Interior’s National Register of Historic Places. 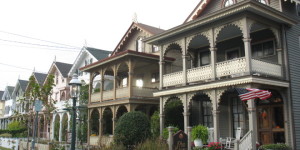 The new designation meant that no property within the historic limits could be modified without federal approval if state or federal funds were to be used in the process.  With their bold and unprecedented actions, Pitts and Bramble had effectively put a halt to urban renewal in Cape May and they did it without the knowledge or approval of any city leaders.

Mayor Gauvry and his fellow city leaders were removed from power in the next election as a preservation wave swept the city. He was replaced by the head of the cottager’s group, Bruce Minnix, and a new council of preservationists was elected as well. Gauvry’s last official act in office was to dedicate his pet project, the new Washington Street Mall that remains a tremendous tourist attraction to this day.

Mayor Minnix continued promoting preservation of private properties around Cape May and established beautification projects all over the city, like the construction of a bandstand in Rotary Park. He also arranged for the entire city of Cape May to be named a National Historic Landmark, an honor that was bestowed in 1976, just after Minnix had left office.

Mayor Minnix served only one term and was replaced by Arthur “Mickey” Blomkvest, who remained Mayor until 1988. Through the stewardship of Minnix and Blomkvest, Cape May saw a renaissance that turned the sleepy seaside town back into the “Queen of the Seaside Resorts.”

Restoration and renovation of historic properties continue to this day, guided by the principles established by Minnix and Blomkvest. Today, all construction, renovation, or demolition within Cape May’s historic district must have the approval of the city’s Historic Preservation Commission.

Once the Physick Estate was saved from demolition, MAC renovated the mansion into a Victorian museum and the Carriage House into a museum with changing exhibits. Under the leadership of Michael Zuckerman, today the organization continues to be a driving force for preservation and education related to Cape May’s history.

Ben Miller is the Historical Editor for Exit Zero magazine and author of The First Resort:Fun, Sun, Fire and War in Cape May, America’s Original Seaside Town and Cape May Moments, both published by Exit Zero. Ben has also designed two museum exhibits based on Cape May’s history for the Mid-Atlantic Center for the Arts and Humanities.