Teaching Americans How to Eat Soup 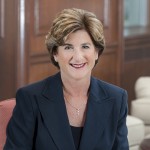 As a “Jersey girl,” born and raised in Monmouth County, I’m proud to lead Campbell Soup Company, which has deep roots in the Garden State and an enduring commitment to our hometown of Camden.

Camden has been our company’s home ever since Joseph Campbell and Abraham Anderson formed a partnership in 1869 to can tomatoes, vegetables, jellies, and condiments.  You may have noticed that I didn’t mention soup.  That came later, when Mr. Campbell found a new partner, Arthur Dorrance, in 1882 to expand the business. 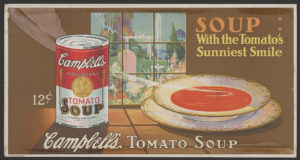 Courtesy of Library of Congress, LC-DIG-ppmsca-42023.

They didn’t know it at the time, but Mr. Dorrance’s nephew would make history

After completing his Ph.D. degree in organic chemistry, John received teaching offers but his career path took an unexpected turn when he visited the Joseph Campbell Preserve Company in 1897.

Seeing an opportunity to test his own ideas about making soup since Campbell didn’t make any, John practiced his chemistry at his uncle’s company, earning $7.50 a week.  Working on his own, he created the method that produces condensed soup by removing water.

His breakthrough lowered production costs and enabled condensed soup to be made on a large scale.  Within a year, he developed five varieties of condensed soups, including Tomato, which remains a top seller for us.

John served as company president from 1914 until his death in 1930.  During his tenure, the company’s name was changed to Campbell Soup Company and Campbell’s soups became a staple in American households.

Americans “had to be educated to eat soups,” John recalled, so Campbell launched advertising campaigns to alter America’s dining habits and promote its soup.

The advertising would introduce Campbell’s Kids in 1904, followed by the memorable slogan –“M’m! M’m! Good!”– in the 1930s that helped make Campbell’s soups the number-one brand of wet soup in the U.S., a position we still hold.

Today, Campbell is a growing global food company with sales of more than $8 billion and trusted brands like Campbell’s, Pepperidge Farm, V8, and Arnott’s.  We’ve also reshaped our portfolio for future growth by acquiring Bolthouse Farms, Plum Organics, and Kelsen Group in the past two years.

I’m proud of our commitment to Camden, where we employ more than 1,000 people at our World Headquarters and give back to the community.  Since 2007, we’ve invested millions of dollars to expand and improve our headquarters campus and the surrounding area, and we’re combating childhood hunger and obesity in Camden through our Campbell Healthy Communities Program, a $10 million initiative.

As the 12th CEO and first woman to lead Campbell, I believe we can make a profit and a difference as we write the next chapter in our company’s history.

Denise Morrison is President & CEO of Campbell Soup Company, with over 30 years of experience in the food business.  She is involved in various efforts to promote wellness, was a member of President Obama’s Export Council, and is regularly named among the Fortune and Forbes Most Powerful Women.