Over eighty years since the kidnapping of the Lindbergh baby and subsequent trial, execution, and conviction of Richard Hauptmann for the crime, interest in the Lindbergh Case is greater than ever. 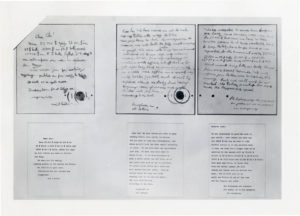 The first and second ransom notes of the Lindbergh kidnapping case. Courtesy of NJ State Archives.

On October 9, 1981, Governor Brendan Byrne, issued an executive order in which he declared that all of the files pertaining to the Lindbergh Case held by the New Jersey State Police were historical in nature and thereby available to the public for research. With that, the floodgates were opened.

Today, the New Jersey State Police Museum and Learning Center is the hub of research on the Lindbergh Case. Housing over 250,000 documents, photographs, videos, and artifacts, the State Police Museum is a mecca for those interested in studying both the “Crime of the Century” and “Trial of the Century.” Among the artifacts on display are the ransom notes, the handwriting comparison charts, the kidnap ladder, and the electric chair that executed Richard Hauptmann.

The three categories of Lindbergh Kidnapping Case researchers who use the Museum’s archive are students, the press, and hobbyists. Students are the most important researchers as they are the ones who can learn the most from studying the case. From middle school through graduate school, students from around the world have been studying various aspects of the Lindbergh Case for years. Many schools in New Jersey are now teaching the Lindbergh Case as a complete unit rather than simply in passing when studying state and local history. It is no longer confined to the history class either. Criminal justice, law, English, and even science classes all teach various aspects of the Lindbergh Case. Schools visit the New Jersey State Police Museum and Learning Center to see the original evidence from the Hauptmann Trial and to hear lectures about the case.

The press, too, has a recurring interest in the Lindbergh Case. These days it is usually around “anniversary dates” that a newspaper or local news crew will run a story, or they might do a human-interest story about a specific aspect of the case.

The largest group of researchers is the hobbyists, the modern day successors to the “armchair detectives” of the 1930s. They are the backbone of current research in the Lindbergh Case. With the advent of the Internet, individual researchers have actually formed virtual communities where they discuss and debate a myriad of aspects of the case that will never die. The hobbyists are the most passionate about the case and are steadfast in their individual beliefs as to what happened all those years ago.

The Lindbergh Case is truly America’s “soap opera,” complete with a cast of characters and happenings worthy of Peyton Place: illegal aliens, alcoholics, con men, money launderers, the rich and famous, the police and the mafia, suicides, promiscuity, lies and deceit, kidnapping, and murder. This fascinating case is available for exploring – free of charge – at the New Jersey State Police Museum.

Mark W. Falzini is one of the foremost experts on the Lindbergh kidnapping case, a topic he has studied for over twenty years.  An archivist for the New Jersey State Police Museum, he earned degrees from Rutgers University and Trenton State College.