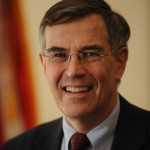 When Albert Einstein died in 1955, The Washington Post featured a drawing by Herblock showing the Earth with a large sign saying, “Albert Einstein lived here.” Clearly claimed as a citizen of the World, Einstein is most commonly associated with Princeton, New Jersey, where he spent his last two decades working at the Institute for Advanced Study.  He is perhaps New Jersey’s most recognizable figure. 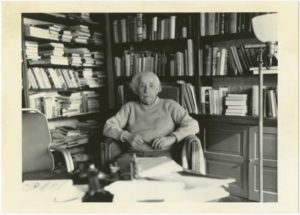 In my office in West Windsor I display a small, glass-covered display box that a friend made and gave me. Inside is a doll-sized Albert Einstein, recognizable by his bushy moustache and the iconic fly-away white hair.  On the outside in all capital letters it reads: “BREAK GLASS IN CASE OF EMERGENCY.”  Everyone finds the curio amusing because all know Einstein has become the symbol for the universal wise man.  How did we come to view Einstein with such awe – as far more than an acclaimed physicist, even as someone who could solve any crisis, if only we would break the glass and set him free?

His earliest fame stemmed from the four astonishing papers he published in his “miracle year” of 1905, written in his off-hours while working as a patent clerk in Switzerland.  In the first, Einstein demonstrated that light waves travel in discrete packets of energy called photons.  In the second, he showed how the random motion observed in particles suspended in water, called “Brownian motion,” results from countless collisions with unseen water molecules.  In the third, Einstein described special relativity, requiring that age-old concepts of length, time, and simultaneity must be reconsidered.  And in the fourth, he explained that matter and energy are just two manifestations of the same thing, linked together by that famous equation, E=MC². Any of the four would have made a lifelong reputation of the young man.

From there, Einstein’s fame only grew.  In 1919, British astronomers on expedition to Africa to view a solar eclipse observed light bending around the Sun, exactly as predicted by Einstein’s theory of general relativity.  The New York Times commemorated the discovery with a breathless headline that read, in part, “LIGHTS ALL ASKEW IN THE HEAVENS – Men of Science More or Less Agog Over Results of Eclipse Observations – EINSTEIN THEORY TRIUMPHS – Stars Not Where They Seemed…”

By the time Einstein moved to Princeton, his cultural status had risen to that of a supreme, all-purpose intellect.  Even today he lives on as an oft-quoted sage of almost any subject: theology (“Science without religion is lame, religion without science is blind”), war (“I am not only a pacifist but a militant pacifist”), and even love (“Love brings much happiness, much more so than pining for someone brings pain”).

Einstein was amused and even uncomfortable with his status as sage.  He once commented, “To punish me for my contempt for authority, Fate made me an authority myself.”  He knew that truth is not what an authority says it is, however wise the saying may sound, but rather it is what becomes understandable by repeated tests against the evidence.  Whether in science, religion, or human affairs, he believed that one must continually test new ideas and work to overcome dogma, assuming “an attitude of humility corresponding to the weakness of our intellectual understanding of nature and our own being.”

It was this attitude that brought Einstein to America.  Disgusted by the growing Nazi authoritarianism of Germany, Einstein sought a true democratic society where the ideas of a former patent clerk could be tested on a par with those of anyone else.  Although Princeton was a quiet, somewhat conservative town, the United States of the 1930s offered in our democracy the scientific, social, and political ferment he sought. And he brought a lot of wisdom along, I think most of us would agree.

If he were looking today, would Einstein move here?  Are we eagerly developing the new thinking that will take us into the future?  Some days I want to break the glass in the small display case in my office to see if Einstein’s attitude would flourish still in New Jersey and America.

Former United States Representative Rush Holt represented New Jersey’s 12th Congressional District in Congress from 1999-2015.  He is a research physicist by training and, prior to his election to Congress, served as Assistant Director of the Princeton Plasma Physics Laboratory.