Reflections on the Hindenburg Disaster

Alas, I never saw the airship Hindenburg, for it exploded on May 6, 1937 in Lakehurst, NJ, two years before I was born. But as a high school student in Brookline, Massachusetts from 1953 to 1957, I used to explore the old rotogravure photo sections common to most newspapers at that time. I found a spread of photos dealing with the Hindenburg as it burned and crashed, and mentioned my excitement to one of my teachers. He smiled and recalled that he had actually seen the beautiful airship as it passed over the high school on its way to Lakehurst in May 1937, and described the silvery coating and the bright swastikas painted on its rudder. Here was a personal link to what fascinated me. My interest permanently piqued, I was able to locate the famous recording of Herb Morrison describing the landing of the dirigible. His matter-of-fact tone changed to one of horror and panic when he tried to portray the inferno as the hydrogen-filled dirigible became a twisted hulk of steel girders in less than three minutes. 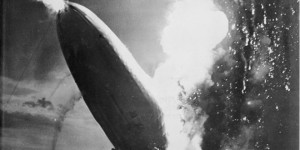 The Hindenburg. Courtesy of the National Archives, Records of the U.S. Information Agency (USIA) [306-NT-116817]

Many years later, as part of my research in military justice, I helicoptered down to Fort Dix, and on the way we stopped at Lakehurst. The huge hangar built to house the dirigibles was still there, and on the grassy expanse one could see a white imprint of the Hindenburg, a permanent reminder of that fateful day in May. Indeed, the age of the airship had been brief and fleeting. Doomed to extinction by the airplane, the wreckage of the Hindenburg was returned to Nazi Germany, melted down and turned into steel for airplanes, which probably flew bombing raids in WWII, only two years in the future. But what caused the inferno that doomed lighter-than-air travel?

Although one would not know from a survey of the vast literature dealing with the Hindenburg, actually there is little doubt on this score. Among the more than 21 linear feet of records housed in the National Archives dealing with the disaster is a description of the charred pieces of a bomb’s timing mechanism, found by one of the investigators at the scene of the crash. Who set the bomb might be a matter of debate, but that it was the cause of the fire seems clear. Yet both American and German experts looking for causes were instructed not to mention sabotage. In 1937, Hitler’s regime could never publicly concede that a malcontent had destroyed this majestic symbol of German glory, while American officials concerned over the growing tension between Germany and the United States—a situation not improved by the decision to ban the sale of nonflammable helium to Germany, rather than the exceedingly inflammable hydrogen—concluded that the probable cause could have been static electricity. However, numerous witnesses, including multiple survivors of the airship’s crew, had uniformly testified that they had seen the fire begin inside a fuel cell located at the rear of the airship. Static electricity (St. Elmo’s fire) might ignite an object on an exterior surface, but that it could penetrate through the thick outer coating of the airship had never been recorded, as it had never happened.

Yet what one wants to believe can sometimes color one’s judgment, and the desire to believe can become an assertion of certainty. What American experts in dirigible operations, and in 1937 there were more than a few, might conclude among themselves differed from what the investigatory commission was “advised” to offer as its findings. Nonetheless, when today one travels by air, strapped in to a narrow seat in a noisy aircraft, one might recall with real nostalgia the bygone era when you could float above the seas in elegance, calm comfort, and palpable relaxation.

Jonathan Lurie is Professor of History Emeritus at Rutgers University, Newark from where he retired in 2014 after a 45-year career. His 2012 biography of William Howard Taft (Cambridge University Press) has just been reprinted in paperback.