Ratifying the Bill of Rights: New Jersey Leads the Way 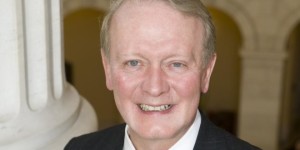 How appropriate that New Jersey was the first state in the new nation to ratify the Bill of Rights. That distinction is a fitting keystone in our state’s 350-year history of serving as the crucible for American innovation, enterprise, and culture and our prized role on the forefront of American history: from the crossroads of the American Revolution to the cutting-edge of the 21st century. 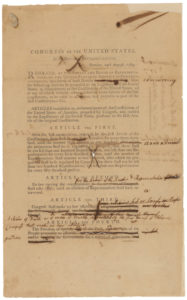 Part of the Bill of Rights. Courtesy of National Archives.

The freedoms and liberties ratified in the Bill of Rights are engrained in the American experience with a continuing appreciation that this opportunity has been maintained in war and peace. The Constitution and its Amendments are revered by our citizenry and emulated by countries around the globe that seek the same freedoms we have in the United States.

The Bill of Rights, the first ten amendments to the Constitution, enhances personal freedoms, limits the strength and reach of government, and reserves powers to the states and the people. These rights preserve our sacred liberties and enable the free exercise of our beliefs, both political and religious, and strengthen the debate that has continuously moved our Nation forward from the 18th to the 21st century. The Bill of Rights continues to stand the test of time.

Without the guiding hand of the Bill of Rights where would our Nation be? Where would we be if the suffragists, led by New Jersey’s own Alice Paul, could not assemble, Martin Luther King could not speak,The New York Times could not report, and citizens could not petition? Would the government and public servants still be accountable to the people, or would our citizens be in service to the government? Would the accused be able to defend themselves or would hysteria condemn the innocent? Would we have 50 laboratories of democracy or would the heavy hand of the federal capital attempt to control all levels of government?

I can imagine how difficult writing and then ratifying the Bill of Rights must have been. My family has had a little experience in this area. My father, Wesley L. Lance, was a delegate to the convention that drafted New Jersey’s 1947 Constitution, which starts with a 21-point section on Rights and Privileges. (In fact, he was the last surviving of the 81 members of that convention when he died in 2007 at the age of 98.) He was called again to serve as a delegate to New Jersey’s 1966 Constitutional Convention, which dealt with reapportionment of the Legislature. Neither convention was without conflict and controversy.

With so many variations in the American experience, with such great differences in perspective and so many cultural and geographic points of view, controversy and dissent are assured. Yet we have remained one country, one Nation, challenged, though still united under these guiding principles authored more than 200 years ago.

The American experiment of representative democracy gains essential strength from the Bill of Rights. My tenure in the United States House of Representatives is guided by voices at my townhall meetings, correspondence to my offices, and petitions that support causes or issues that need the attention of the Congress. The process of building consensus to address the Nation’s challenges relies on a people confident in their ability to be heard, knowing their speech is protected and the power of government is in check. It is that confidence that has continually advanced the Nation as a whole.

I am very proud as a Member of Congress and, more important than that, as a citizen of this great Republic, that New Jersey was the first state to ratify the Bill of Rights.

Leonard Lance is the U.S. Representative for New Jersey’s 7th Congressional District. Prior to joining Congress, Lance served as a member of the New Jersey State Senate beginning in 2002, where he represented the 23rd Legislative District. He held the position of Minority Leader of the Senate from 2004 to 2008.