Preservation New Jersey (PNJ) announced its annual list of the ten most endangered historic sites in New Jersey at a statehouse press conference on May 15, 2014. This is the twentieth such roll that PNJ, a member-supported, historic-preservation advocacy organization, has unveiled. Because I have been involved with the effort from the start, I was happy to accept the Historical Commission’s invitation to use the coincidence of the NJ 350 commemoration with the china anniversary of PNJ’s 10 Most list to reflect briefly on the endangered site roster’s evolution.

Although I helped launch the project, it was not my idea. This honor goes to Debbie Kelly who was then PNJ’s executive director. It was probably sometime in 1994 that Debbie called me with a proposal I didn’t refuse. She thought PNJ could beneficially steal an idea from the National Trust for Historic Preservation, which had been highlighting America’s Eleven Most Endangered Places since the late 1980s. Debbie wanted, with my help, to produce an annual list of endangered historic sites in New Jersey. I was the director of research at the Historical Commission at the time and a member of the PNJ board. I was also a member of the Historic Sites Review Board, which recommends sites for inclusion in the state and national registers of historic places. 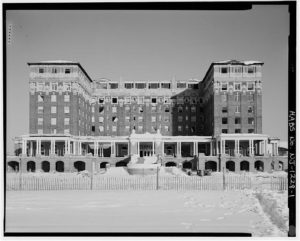 Christian Admiral Hotel, known as Hotel Cape May in 1905. Courtesy of Library of Congress, HABS NJ,5-CAPMA,70–1.

I think I agreed to work with Debbie on this mostly because I expected it to be fun. But I also thought she had a good idea, and figured we could probably get this off the ground without too much difficulty. I daresay neither of us had much of a clue what we were getting into, although the basic point was clear. We sensed that an annual statewide list of endangered properties could do well for PNJ by doing good for threatened historic sites in New Jersey. The main idea was to achieve visibility both for PNJ and for the historic buildings. If we could compile a list of compelling historic sites that were in jeopardy, and if we could publicize the sites through the press, then maybe this would attract support for preserving the sites on the list at the same time that it might aid PNJ in its unending effort to get on secure financial footing.

Once the board approved the project, we had a number of problems to solve, and this brief sketch is not the place to dwell on them. But one of the first was to establish selection criteria. How were we to decide what to list? Ultimately we came up with three standards that we still use. To be considered for the annual endangered sites list a property first needs a compelling story: either architectural or associational. Next, a site needs an identifiable and time-sensitive threat. Lastly, we created an efficacy standard. Would the attention a property received from our listing make a positive difference in saving it? What is the likelihood that being included on our list would galvanize public support, or bring out a sensitive buyer, or pressure public officials to take action?

It is sobering to note that even though we have over the years mostly selected properties that we thought could be saved, a number have been demolished. From our first list in 1995, for example, we lost – only a year later – the Christian Admiral Hotel in Cape May. Known as the Hotel Cape May when it was built between 1905 and 1908, the massive Beaux-Arts style lodge was one of the largest and most luxurious hotels of its day. In 1962, the Hotel Cape May became the property of the Christian Beacon Press headed by Reverend Carl McIntire, a right-wing, fundamentalist Presbyterian minister and radio evangelist. Reverend McIntire converted the hotel into the Christian Admiral Bible Conference and Freedom Center, from which he broadcast for more than a decade, until he ran afoul of the Federal Communications Commission. Christian Beacon filed for Chapter 11 bankruptcy in 1990, and the property was sold to a developer who razed the grand old hotel in favor of a cluster of large, single-family homes. For me, the demolition was a stark reminder that what we were doing was actually pretty serious business. Loss of the Christian Admiral was so significant that it called into question the National Historic Landmark status the Cape May Historic District had achieved in 1976. In 1998, PNJ, controversially, included the entire historic district on the endangered sites list, arguing the notable concentration of Victorian architecture was becoming a victim of its own success.

To my surprise – partly, at least, because I was naïve – managing the press has been one of the committee’s biggest challenges. It took us quite a few years before we realized that a press conference at the statehouse was the best way to gain attention for the announcement. In the beginning we moved the press event around. The year we designated the buildings on the south side of Ellis Island (1998), for example, and held our announcement there, this was successful. The year we held it along the White Horse Pike in Camden County, it was not: no one came. The media landscape in New Jersey, like everywhere, has changed in twenty years, and it is a delicate balance the committee must achieve between giving the supporters of the sites on the list (and the media outlets in their neighborhoods) advance notice of their selection, and keeping the list a secret until it is announced.

While I have learned some valuable lessons about managing the media from my work on the 10 Most list, the really rewarding part of this for me is the exposure I get to the marvelous variety of historic resources in New Jersey and the wonderful stories these buildings tell. There is no way for me to do justice to the rich medley of historic sites that we have highlighted on our annual lists. At the project’s website one can search by year or by municipality. I encourage anyone who is interested to poke around at the site.

All 21 counties, and, by my crude count, roughly one quarter of the municipalities in New Jersey have had a property listed. Sadly, this provides evidence of the many threats to historic resources that pervade New Jersey. Lessons can be drawn from every site on the twenty-year list, but a few personal favorites highlight the range of property types and threats the list has addressed over two decades. In 1997, we listed Hinchliffe Stadium in Paterson, after the school board, which owned the Depression-era arena, closed it for lack of maintenance funds. One of very few surviving stadiums with a strong connection to Negro league baseball, Hinchliffe’s fortunes were uncertain. But, after a friends group got the stadium listed on the state and national registers, new leadership of the school system included improvements to the arena in its master plan. In 2009, the voters of Paterson approved a bond for the restoration of Hinchliffe Stadium, and the National Trust for Historic Preservation featured it on the cover of Preservation Magazine. In 2011, the New Jersey Historic Trust recommended Hinchliffe for a $500,000 grant, and, in March 2013, it was designated a national landmark, as an exceptional example of a Negro league baseball stadium.

Few of the sites PNJ has promoted with the 10 Most list have had as remarkable a turnaround in their fortunes as Hinchliffe – and even it is not completely out of the woods. More typical, alas, is the remarkable Krueger-Scott Mansion on Martin Luther King, Jr. Boulevard in Newark, which was included on the 2011 list. An ornate 26-room mansion built between 1887 and 1889 by Gottfried Krueger, a German-born beer baron, it has been vacant since 1982. The home’s last private owner was Louise Scott a former domestic worker who built a chain of beauty salons and is considered Newark’s first African-American woman millionaire. A variety of community-oriented projects have been attempted at Krueger-Scott, the most notable of which was the effort to establish an African-American Cultural Center in the 1990s, but the building’s prospects are uncertain.

Most of the sites included in the cumulative endangered list were built during a period I have elsewhere called “the New Jersey century,” a remarkable period of population growth and economic development that ran from the 1840s through the 1950s. One notable exception is the two-million square foot, six-story research laboratory designed by world-renowned architect Eero Saarinen for the Bell System. Built between 1959 and 1962, and expanded in 1985, Bell Labs was the site of many major technological breakthroughs and it is a modernist masterpiece. But the massive complex affords more office space than its suburban neighborhood can make use of and it sits on a nearly-500-acre site that the town would like to develop. Plans for Bell Labs have changed a few times since PNJ listed it in 2007. The most recent iteration called for preserving essential features of Saarinen’s design, but many advocates remain wary. It is a reminder that in battles for historic preservation all our victories are temporary because new threats to old buildings can materialize quickly, while the defeats are permanent. Demolished structures do not come back.

The annual announcement of PNJ’s 10 Most Engangered Sites has become an important moment on the calendar of the historic preservation community in New Jersey, and one of PNJ’s more important projects. We’ve lost quite a few notable buildings, but the list has also played a part in many successful campaigns to rescue historic sites from the wrecking ball’s arc. I can’t speak for Debbie, but for me we’ve been more successful than I ever imagined. Looking forward it is clear to me that New Jersey will continue to need means such as this for bringing attention to historic properties in jeopardy. Assuming PNJ stays afloat, I think we’ve built a mechanism that can endure.

Howard Green started Public History Partners in 2005 when he left the New Jersey Historical Commission, where he was director of research for two decades. A partial list of PHP’s clients includes: the Army Corps of Engineers, the Historical Society of Princeton, the Save Ellis Island Foundation, the Hackensack Water Works Conservancy, the VNA Health Group, the New Jersey Historic Trust, and the Union League of Philadelphia. The author of numerous publications in the fields of New Jersey, public, and oral history, Green’s book Words That Make New Jersey History, in its second edition, has been widely used in colleges and some high schools. A former president of the national Oral History Association, Green’s oral history experience is vast, extending to once having interviewed a  group of men who worked with Thomas A. Edison.