Over a Century Before the 19th Amendment, New Jersey Women Vote

New Jersey was the first U.S. state to grant voting rights to women.

Single women and widows in New Jersey had the possibility to vote before 1790 due to the vague language used in Article IV of the 1776 New Jersey Constitution that defined eligible voters as propertied “inhabitants.” In addition, the New Jersey election laws of 1790 and 1797 explicitly included these women in the electorate. These laws are unprecedented in the history of the United States, although it should be noted that they were only enforced for a short period of time, before being withdrawn in the Act of 1807. 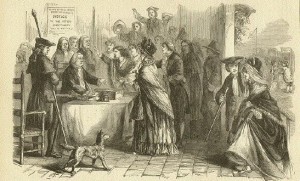 A few years ago, as a visiting researcher invited to do research on women’s voting rights in 18th century New Jersey at the Department of History at Rutgers University, New Brunswick, I had the great privilege to learn about New Jersey, its history, and its localities, as well as to meet with New Jersey historians specialized in both local and national history. My conversations on women’s rights in New Jersey with Professor Maxine Lurie of Seton Hall University were particularly helpful.

From the point of view of a French scholar, this historic legislation regarding 18th century American women’s voting rights is fascinating. What is striking in particular is that in an American-French comparative perspective on this subject, a perspective that necessarily takes into account the political and institutional specificities of both countries, the political experience of New Jersey women reveals the precocious character of the New Jersey legislation that extended voting rights to single women and widows.

Another fundamental difference highlighted by the comparison is that voting qualifications were states’ prerogatives in the early American Republic, which was not the case in Revolutionary France. Moreover, the distinction between “active” and “passive” citizens was applied during the French Revolution and women were classified as passive. French women were “citizens” but they had no formal political rights, even though their status in areas like family law improved towards the end of the 18th century. They were not authorized to elect their representatives or participate in national political decisions directly through their vote. French women’s voting rights were established much later in French history, in fact, not until the end of World War II in 1944!

The social and political climate of late-18th century New Jersey helps explain why this state granted voting rights to single women and widows at a time when no other U.S. state did. There is no single reason why New Jersey legislators granted the right to vote to women, but several elements can be put forward:

– The electoral competition between political factions, which wanted to expand their electorate, including propertied female voters;
– The American revolutionary rhetoric on political rights for propertied individuals, as well as the transatlantic exchanges of progressive ideas of the Enlightenment era, which directly influenced some New Jersey legislators;
– And the settlement in the state of large populations of Quakers, who represented a strong social and political force in West Jersey and who advocated some form of equality between men and women.

Combined, these factors gave New Jersey women a temporary right to vote more than a century before the passage of the 19th Amendment in 1920, which secured the right to vote for all American women.