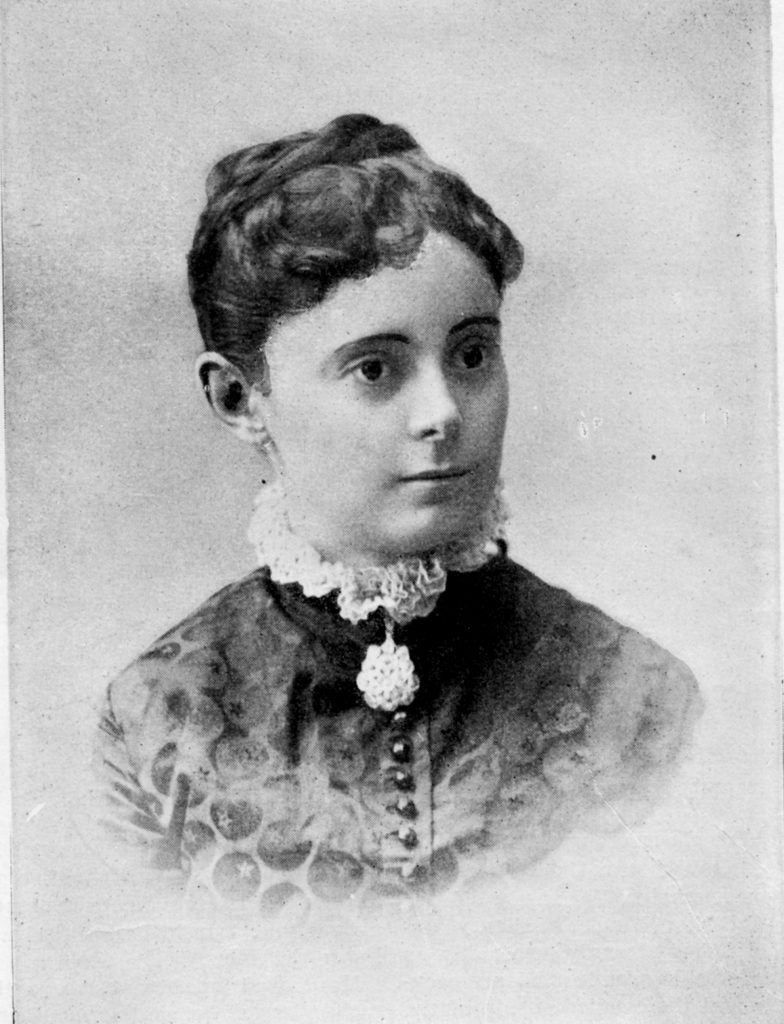 Sarah Atkinson was born on October 24, 1861 in Brooklyn, New York. The seventh of ten children to Asher D. Atkinson and Emma Barnsdall, she moved to New Brunswick, New Jersey with her family at age eleven. While in New Brunswick, she received a classical education studying Latin and contemporary European languages at Miss Park’s School for Girls on Livingston Avenue. In 1883, she traveled to San Juan, Argentina with her sister Florence and fifteen other American women to teach at the Girls’ Normal School of San Juan. Her sojourn was part of an initiative by the Argentine government to improve the quality of the country’s teachers. It was during this stay in South America that she first became proficient in Spanish and Portuguese, to which she would later add French, German, and Italian. Upon her return in 1886, she began to study stenography and eventually developed her own system of Spanish stenography based on the Pittman System. Her skills both as a translator and stenographer made her a sought after professional in the New York area, and soon she became known as the only Spanish stenographer in New York City. She lived in Manhattan while working at Shultz & Sanches, a major import house in the city. At the end of the Spanish-American War in 1898, she was called to public service as a Spanish translator for the American delegation to the Paris Peace Conference, becoming the first recorded female diplomatic attaché in the world. While she retained her position on the delegation, she also became the highest-paid female government employee in the nation at a yearly salary of $2,500. Following the peace conference, she served as a stenographer and typewriter for the Philippine Commission in Washington, D.C. for a few months, declining an offer to continue her service in the Philippines and returning to New Brunswick, where she found a job as a translator for the Interwoven Stocking Company, a position she held for over forty years.

The earliest record of her involvement as a suffragist is from April 1913, when she became a member of the Political Study Club, the main organization in New Brunswick fighting for the cause of women’s suffrage. She was active in the club, recruiting members and distributing information about club meetings and other suffrage-related events to the women of the city. In November 1913, she attended the annual convention of the New Jersey Woman Suffrage Association in Newark, an event also attended by future NAWSA President Carrie Chapman Catt. Following the defeat in 1915 of the proposed New Jersey constitutional amendment extending full voting rights to women, she marched in New York on October 23 as part of the “best showing yet” of New Brunswick women for suffrage. In February 1916, she joined a group of sixteen New Jersey suffragists at the office of State Senator W. E. Florence, asking him to vote for the bill for women’s presidential suffrage then in the state legislature. Concurrent with her agitation for suffrage, she was also involved in many other causes important to social reformers of the day. She was a member of the temperance movement through the Anti-Saloon League of New Jersey and a founding member of the New Brunswick branch of the Young Women’s Christian Association (YWCA).

Atkinson remained active in the movement through the end of the decade, as the push for a federal amendment grew and the hopes of the suffragists came to fruition. In March 1918, she wrote a letter to notoriously anti-suffrage New Jersey Senator David Baird, asking him to support the amendment and rebutting common anti-suffrage arguments of the time:

A person born blind may not appreciate the advantages of sight, and a woman who has never enjoyed the rights and privileges of citizenship may not appreciate the possession of political rights. The blind person suffers for lack of sight, without regard to whether he realizes it or not, and the disenfranchised woman suffers for lack of political rights, whether she realizes it or not. In both cases, the disability is real and deplorable.

She was active in the New Brunswick Equal Suffrage League, and during the push for New Jersey to ratify the amendment after its passage in Congress, she collected signatures at her work and in her neighborhood of women in support of ratification. On February 9, 1920, she was present at the session in which the New Jersey state legislature voted to ratify the Nineteenth Amendment. After the New Jersey fight was won, she remained interested in the movement, even offering her services as a translator and stenographer to Carrie Chapman Catt for the 1920 International Suffrage Convention. She maintained her involvement by joining the League of Women Voters shortly after its founding in 1920, and continued to be a local leader in getting women involved in politics.

Sarah Atkinson died on March 20, 1956, at the age of ninety-four. She remained professionally and politically active through the end of her life, and was noted in the New Brunswick community for continuing to work to the age of ninety-three and for her determination to vote in every election despite health difficulties. In her life, she was a pioneer both in her career and in her activism, typifying the new idea of the “professional woman” and of the middle-class progressive reformer. She never married, and she lived in her family home at 11 Hardenbergh Street until her death.