By Patricia A. Martinelli, M.A., Curator at the Vineland Historical Society 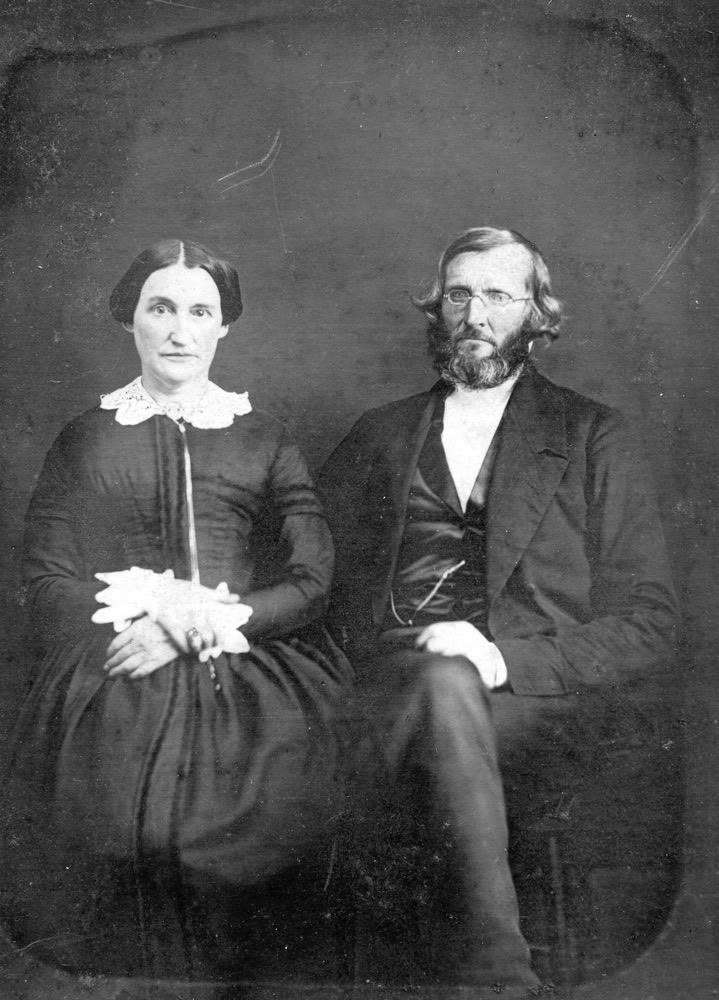 Photograph of John and Portia Gage

Portia Kellogg, born in Manlius, New York on March 15, 1813, was the daughter of Leonard and Sallie French Kellogg. She was never given the opportunity for an advanced education since she went to work when she was twelve years old. In 1830, at age seventeen, Portia met and married John Gage (1802-1890), eleven years her senior. Initially the couple lived in Watertown, NY where John had an iron foundry business. In 1836 they moved to Chicago where he made a fortune in the flour mill business. Gage was a charismatic businessman who was also an outspoken member of the Chicago Board of Freeholders. The couple moved with their family to Vineland in October 1864, where they quickly became leaders in the small community. Her sister in law was Frances Dana Gage (1808-1884). “Aunt Fannie” as she was known, was a well known writer of poetry and women’s interest columns which were featured in women’s rights publications.

John, long an advocate of equal rights for women, was a Spiritualist and president of the local chapter of the National Liberal League. He attempted to start a vocational school that would offer job training to both men and women. While Portia spent the early years of their marriage raising their eleven children, she later became equally active in a variety of causes.

With other local women, including business owners like Abbie Leavitt and Susan Fowler, and dress reformer Mary Tillotson, Portia listened and learned from prominent suffragists such as Lucy Stone and her husband, Henry Blackwell, who spoke about equal rights to a packed audience at Vineland’s Plum Street Hall on December 4, 1866. Immediately following their talk, the audience gathered to found an Equal Rights Association, which began to actively support suffrage. By August 1867, the first state meeting on Impartial Suffrage was held in Vineland its focus being, “to consider the best means of bringing the question of impartial suffrage irrespective of sex or color, more fully before the people of New Jersey.” The people in attendance signed a massive scroll that is owned by the Vineland Historical Society, which measures more than twelve feet in length. Portia attended the first convention of the New Jersey Woman Suffrage Association in November 1867 and served as its president from 1868-1871.

Following the landmark Impartial Suffrage meeting, local residents continued to meet regularly to discuss women’s suffrage and by October 15, 1868, a large group of women met in the Union Hall on the Railroad Boulevard. There it was resolved that they would go to the polls on November 3 and vote in the first Presidential election held after the Civil War. Both The Revolution and the New York Times had taken note when Portia Gage had attempted to cast her ballot in a local election held in March 1868. At that time, her request was politely refused on the grounds that she was not a registered voter. A few days after that election, Portia wrote to C.B. Campbell, a friend of the Gage family stating, “I was induced to offer a vote first, because I felt it a duty, and second, out of curiosity. I wanted to know how men did behave at the polls. I feel stronger, wiser and better for having come in contact with the political influence of last Tuesday at the polls. My fears were groundless, as the men whom I there met were quiet and well behaved, and treated me as respectfully as though I were in a Church or lecture room. Of course I felt somewhat embarrassed, being the only woman in the room, but I walked through being kindly greeted by some, not “jostled” or molested by any.”

Now that she had tested the waters, Portia gathered together 171 other Vineland women in November 1868. They arrived once again at the Union Hall, to join the men casting their ballots. While the men were once again supportive, the women were advised that they could not vote because they were not legally registered and therefore, they could not use the official ballot box. That proved to be no problem for the women, who had come prepared with both their own table, ballots, and a hand-made ballot box. A few weeks later, Susan B. Anthony wrote to Campbell saying, “Vineland women did splendidly on Election Day and will no doubt continue to do the same. So send us all the good words.”

This was significant because, although small groups of women or individuals had staged such protests before, this was the first time in America that so many women had turned out at one time to support suffrage. Their protest, which was featured in The Revolution, a feminist publication, inspired many women throughout the United States to stage similar large demonstrations and quickly revived interest in the suffrage movement at a national level.

Portia died on February 23, 1903 in Vineland. In her obituary it was written that, “The impression she made upon those who knew her best is expressed by the work STRENGTH. In all respects she was a strong woman.”

Vineland Historical Society: Vineland Historical and Antiquarian Society museum is recognized as a stop on the New Jersey Women’s Heritage Trail for the contributions made by these women. In addition, Vineland has been included on the upcoming National Women’s History Museum timeline of history for their efforts.

Photograph of John and Portia Gage from www.bookofbowie.net family. INDIs at https://goo.gl/images/WpxbGS