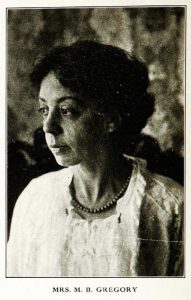 Musette Brooks was one of five children born to Eugene and Oceanna Everett Brooks on October 10, 1876. The family lived in Washington, D.C. where her father was a court messenger and clerk. Educated in public schools, she became a teacher. Upon graduation and before her marriage, she served as a clerk to a principal and also was a supervisor of first-year work in the D.C. public schools.

On June 23, 1904 she married Eugene Monroe Gregory (1874-1953) in Washington, D.C. Eugene was from Williamsport, PA and attended the High School and Preparatory Department of Howard University. He received his Harvard AB from 1897-1898 and then attended law school there from 1898-1899. While teaching high school in Washington D.C., he studied law at night at Columbian University (now George Washington University) and received his LLB in 1899. After becoming a lawyer he was admitted to the Bar in three states: Washington D.C., New Jersey and New York. Throughout his career, he practiced law in Trenton, Jersey City, and Newark, NJ holding several important positions including: being appointed to a clerkship in the New Jersey Supreme Court Clerk’s office, serving ase head of the War Department’s legal department, and later becoming an assistant Judge Advocate for Maritime Affairs. Initially the couple lived in Trenton, but by 1910 they had moved to 173 North Eleventh Street in Newark. They did not have any children.

Community service was very important to Musette and she held leadership roles in several organizations including, being the director of the Music School Settlement in New York and a member of the board for the Old Folks’ Home of Newark, NJ. In addition, she was both the secretary and chairman of the executive board of the New Jersey Federation of Colored Women’s Clubs. Likely due to her education background, she was the founder of the Urban Literary Society of Trenton and was elected president of the Phyllis Wheatley Literary School of Newark. Her biggest focus was supporting the Working Girls’ Home and the Colored Mission of the Diocesan Auxiliary of the Cathedral of St. John the Divine in New York City eventually becoming its superintendant. She was also a leader in the Urban League. During WWI, she engaged in many activities in both NJ and NY including serving as the assistant chairman of the women’s committee of the Soldiers Day celebration in Newark on April 27, 1918. She also served on the Mayor’s committee to welcome home soldiers in New York.

She was an active member of New Jersey state suffrage organizations, but unfortunately not much has been documented about the events she attended. In August of 1919, she attended a rally held at the New Monterey Hotel in North Asbury Park, NJ. At this event she was appointed to the Executive Committee of the New Jersey Suffrage Ratification Committee (NJSRC). The focus of the NJSRC was to elect the “right men” who supported woman suffrage in the elections leading up to the ratification of the 19th Amendment. They sent literature all over the state asking voters to cast their ballots for men who said they endorsed woman suffrage. The committee worked in partnership with the New Jersey Woman Suffrage Association, the State Federation of Women’s Clubs, the State Federation of Colored Women’s Clubs, the State Women’s Christian Temperance Union, and the State Organization for Public Health Nursing.

She held the office of vice president of the Newark Branch of the National Association for the Advancement of Colored People (NAACP). Her profile was featured in two issues of The Crisis. As stated on the website of The Crisis-Modernist Journal Project, “When W. E. B. Du Bois founded The Crisis in 1910, as the house magazine of the fledgling NAACP; he created what is arguably the most widely read and influential periodical about race and social injustice in U.S. history. Written for educated African-American readers, the magazine reached a truly national audience within nine years, when its circulation peaked at about 100,000.”

Musette died on July 26, 1921 in Mount McGregor, NY after a long illness. In her obituary in the Evening Star, it was written, “Leaving this city (Washington D.C.) she became a volunteer social worker and leader in many movements for the advancement of the Negro race in greater New York and New Jersey.” After her death, the Federation of Colored Women’s Clubs created a scholarship in her name.