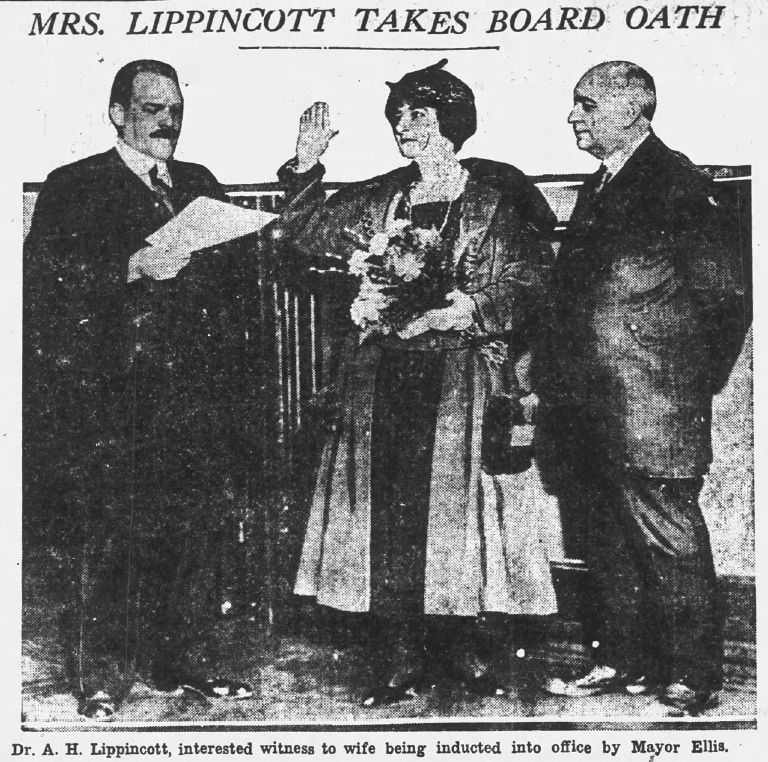 Photograph of Mrs. Lippincott being inducted into the Camden Board of Education, Camden Post-Telegram, January 15, 1921.

Miriam Lee Early was born in Hightstown, New Jersey, on March 10, 1877. Her parents were Harriet Whitmore Ogborn and Robert Morrison Early. She had an older sister, Nellie E. Early, who was born in 1874.Miriam’s father worked as a telegraph operator in Hightstown and then as a printer when the family moved to Camden. Her mother was a homemaker. The family appears to have been comfortably middle-class, owning their own home at 729 Mickle Street in Camden.

Always involved in the arts and dramatic performance, Miriam graduated in 1896 from Pennington Seminary and Female Collegiate Institute, a co-ed college prep, day and boarding school in Pennington, New Jersey. From there, she attended the Graduate School of Oratory at Northwestern University in Evanston, Illinois in 1897. Following her graduation from Northwestern, she worked as a private instructor in elocution. In 1900, she returned to Pennington as Director of Elocution and Oratory, where she taught until 1905. From 1907 to 1915 she held positions on the Swarthmore College faculty as head of the Dramatics Department and Instructor in Public Speaking.

By the time she was 30, Miriam was well known for her public performances. In April 1907, an article in the The Washington Post reported, “Miriam Lee Early, of Philadelphia, will give a dramatic recital, for the benefit of the Florence Crittenton Home, at W.C.T.U. headquarters…Miss Early has met with a cordial reception in large cities.” The performance is also an indication that Miriam was already involved in the temperance movement. It was her combined dedication to the crusade for Prohibition and her belief in the equality for women, which brought her into the movement for women’s suffrage.

In 1913, at the age of 36, Miriam Lee Early married widower Dr. Ahab Haines Lippincott, Jr., a prominent Camden urologist and surgeon. From the beginning of their marriage Dr. Lippincott was a supporter of his wife’s political and social service activities. Two years later, in 1915, Miriam had a daughter, Barbara Lee, who died when three days old. The couple had no other children and lived at 406 Cooper Street in Camden.

By 1914, Miriam was a declared suffragist and served as an at-large member from Camden for the New Jersey Woman Suffrage Association (NJWSA); later serving on the Executive Committee. During the campaign to pass the 19thAmendment beginning in 1915, Miriam became the congressional district chairman of the NJWSA and played a leading role in the final push for ratification in the New Jersey State Legislature. In the spring of 1920, Lillian Feickert, President of the NJWSA (and later the first woman to run for Senate from New Jersey), appointed her to represent Camden County as a member-at-large of the Republican State Committee, in charge of organizing the county’s Republican women. When the amendment was finally passed, the Camden Daily Courier, on August 18, 1920 quoted Miriam on the front page. “’It means a great day in the history of our country,’ said Mrs. A. Haines Lippincott…‘It rivals the Magna Charta of England in removing the last vestige of political bigotry.’”

After passage of the 19th Amendment, Miriam turned her energies to educating and encouraging women to exercise their new rights. During the 1920s, through her speaking engagements and performances, she was the most visible advocate for the suffragists in New Jersey. She was an early member of the state board of the New Jersey League of Women Voters (NJLWV), the successor organization to the NJWSA. During the Depression she chaired the Committee on the Legal Status of Women for the NJLWV and remained on the League’s Board of Officers and Directors for twenty years. In 1935, after a survey by the NJLWV found that women were not being allowed to serve on juries in the state, Miriam led a campaign to convince judges and others to empanel women. When the first women were chosen for jury duty in the U.S. District Court, District of New Jersey, in 1936, Miriam was among them.

Her political activism was closely bound with her absolute belief in the importance of enforcing Prohibition and women’s moral responsibility to keep the nation dry. During Prohibition, Miriam served on the board of the New Jersey Anti-Saloon League (NJASL) and was Chair of the New Jersey chapter of the Woman’s National Committee for Law Enforcement (CFLE). The CFLE was a federation of Protestant women’s organizations established in 1922 to promote enforcement of Prohibition laws. Miriam appeared twice before the Judiciary Committee of the U.S. Senate in 1926 as a representative of both the NJASL and CFLE to argue in favor of the Volstead Act. Prior to her appearance in April, the Jersey Journal reported, “When it was announced that Mrs. Lippincott would take the stand many knew that fireworks were in order.”She believed that Prohibition was the greatest reform of modern times, and that it was women’s duty to protect it through exercise of the vote. During one speech in 1924, she pushed the presidents of the CFLE to get out among the women and arouse their interest in voting. The Camden Courier-Post quoted her saying “Church women have been called ‘rocking chair saints’. We would change this to ‘rocking chair sinners,’ for the woman who fails to do her bit to suppress the criminal wave in this country is herself responsible for that crime.”Her friend Zula Casselman said that Miriam “expressed many times a regret that more women did not exercise the right of franchise and participate more fully in public affairs.” It was, however, a losing battle, and with the repeal of Prohibition in 1934, the CFLE lost its purpose and was disbanded.

Beginning in 1921 and throughout the 1930s, Miriam was an outspoken advocate for the World Peace movement and held leadership positions on the Committee on the Cause and Cure of War and the Women’s International League for Peace and Freedom. In October 1931, the Camden Courier-Post ran a article titled, “Mrs. A.H. Lippincott Announces World Court Meeting,” at which a speaker from the American Foundation’s Committee on Foreign Relations (AFCFR) advocated for world peace and disarmament. Miriam was the South Jersey Chair of the AFCFR and in 1935 and was a delegate to the first World Peace Conference held in Brussels, Belgium.

Miriam was a committed club woman belonging to the Camden Woman’s Club, part of the New Jersey State Federation of Women’s Clubs until her death in 1947. She became a Director of the Camden Club in 1917 and served as President from 1927 to 1930. From 1933 to 1943 Miriam was Chair of the Club’s Committee on International Relations. Not surprisingly, for several years she also served as Chair of the Drama Department.

Always an advocate for women’s education, it was through her association with the Woman’s Club that Miriam became involved with the campaign to establish the New Jersey College for Women, later Douglass College of Rutgers University. She was elected to the Board of Managers in 1922, later becoming a member of the Rutgers University Board of Trustees Committee on the College for Women where she served from 1932 until her death. During her tenure as club president, the music building at Douglass was built as a gift from over 100 woman’s clubs in the state. The Camden Club provided funds to dedicate a studio to the memory of Miriam’s daughter. In 1938 Miriam herself funded the Barbara Lee Lippincott Scholarship at Douglass in memory of her daughter. And in 1962, in recognition of her many contributions and long service to the college, a student residence building on the Douglass College campus, Lippincott Hall, was named in her honor.

In her role as the wife of a prominent surgeon, Miriam held leadership positions in numerous medical organizations in support of her husband’s work. In 1927 she organized the first Auxiliary to the New Jersey State Medical Society. Serving as its first president from 1927 to 1928, she organized auxiliaries in every county in the state. After Dr. Lippincott’s death in 1937, she remained the Director of the New Jersey State Tuberculosis Association and a Trustee of Jeanes Hospital in Philadelphia where her husband had practiced.

Beginning in 1937, and continuing for the rest of her life, Miriam dedicated herself to the fight against cancer. She began working for early cancer detection as the first State Commander of the Women’s Field Army of South Jersey, an outgrowth of the American Society for the Control of Cancer (later the American Cancer Society). By 1947 she had mobilized residents in all 21 NJ counties to form American Cancer Society chapters. Her friend Zula Casselman, who founded the New Jersey Women’s Field Army with Miriam, wrote in a tribute in The New Jersey Club Woman in 1947, “During her years of service she made thousands of speeches before almost every organized group in the State… She came to be known and always will be remembered, because of her contribution to the work, as the ‘cancer lady’.”

Along with her activities for women’s suffrage, Prohibition, World Peace and fighting cancer, Miriam found time to be involved with many social service organizations, not simply as a participant, but in leadership roles. In 1937 the Soroptomist Club named her Camden County’s most outstanding woman for her “service, leadership, citizenship and womanhood.”

In the summer of 1947, Miriam suffered a heart attack and after a ten week hospitalization, died on August 28 at the age of 70. She is buried near her daughter and husband in Harleigh Cemetery in Camden .Her obituary in The Trenton Evening Times named her “One of the foremost woman civic leaders in Camden.” 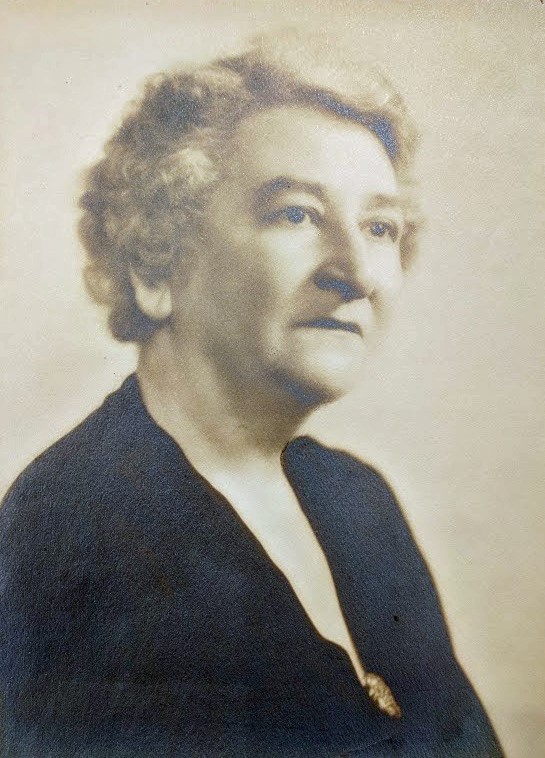