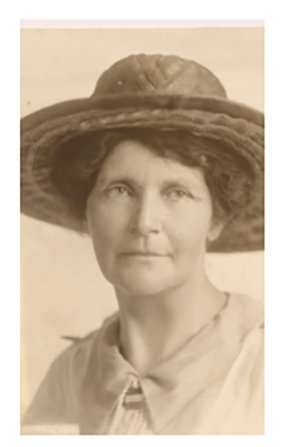 Secretary of the Atlantic City branch of the Congressional Union, Suffrage Prisoner at Occoquan Workhouse

Teacher, protestor, suffragist, Minnie D. Abbott was born around 1866. It is probable that her parents were Benjamin D. and Luncinda Abbott from St Lawrence County, NY. Records show that she was a school teacher at Public School #2 living in Atlantic City, New Jersey in 1917. After the start of WWI, she held a “man’s job” on the railroad but was never considered wealthy (unlike many suffragists). Women like Minnie were considered “riff raff”, by wealthy, socially prominent suffragists, who often didn’t want them included in meetings and parades. Unfortunately little more personal information on her is available. It is believed that she never married. The author was unable to find her date of death.

It is not known when Minnie joined the woman suffrage movement, but she became one of the more militant members in Atlantic City. She seems to have participated with several different groups including the National Woman Suffrage Association (NAWSA), the Congressional Union (CU), and the New Jersey branch of the National Women’s Party (NWP). When Carrie Chapman Catt and President Wilson spoke at the National Woman Suffrage Association’s annual convention in Atlantic City September 4-10, 1916, it is probable that Minnie was there. At this convention, the attendees debated whether to focus only on the federal amendment, or only on the state efforts, or to work on both routes. In the end, they decided to work on the dual approach.

Minnie held leadership positions in several suffrage organizations including secretary of the Atlantic City district of the Congressional Union and officer of the New Jersey Women’s Party. It is likely she decided to join the CU because the militant wealthy CU suffragists were more likely to sympathize with all working women. She also became active in the New Jersey Women’s Party (NJWP) and attended the annual convention of the National Woman’s Party on March 1, 1917 in Washington, D.C. While there, she joined the March 4th picket line with approximately 1000 women who stood for two hours in the pouring rain. NWP members were a mix of disenchanted NAWSA members and progressive, liberal, women which most likely appealed to Minnie. Public opinion around the picketing was sharply mixed with many referring to the suffragists as unpatriotic and traitors. As noted in Iron Jawed Angels, The New York Times claimed that the picketing was “more irritating when done by women…men expect women to be wiser and better-mannered than themselves and are angry when they show themselves to be no better.”

At age 51, she again picketed the White House on July 14, 1917 and was arrested for “unlawful assembly and obstructing traffic” along with Julia Hurburt, Beatrice Kinkead, Pheobe Persons Scott, Allison Turnbull Hopkins, and 11 other suffragists. In the Los Angeles Herald it was written, “The militant suffragists this afternoon celebrated ‘Bastille Day’ by landing in the capital’s bastille. In accordance with their announced program, members of the National Woman’s Party sallied forth from their headquarters to picket the White House with banners emblazoned with the motto of the French Revolution, “Liberty, Equality, Fraternity”, queries to the President, “How long must American women wait for Liberty?”, and other inspirations.” The entire delegation of 16 was given the choice of each paying a $25 fine or spending 60 days at the Occoquan Workhouse outside Washington, D.C. The women refused to pay the fine and were immediately sent to the workhouse. Instead of being treated as political prisoners, which meant they could wear their own clothes, they were forced to shower and don prison attire. After intense public pressure, President Wilson pardoned them all 3 days later. Initially the 16 women refused release, insisting that Wilson press for woman suffrage. Minnie insisted that “we acted within our rights”. She did not want a pardon; she wanted justice and said, “It was not personal liberty but political freedom that we asked.” When the four New Jersey picketers returned home on July 21, the Newark branch of the NJWP gave a big rally for them.

Over 500 women were arrested during the many pickets of the White House, but many were never brought to trial and some were convicted but their sentences were suspended or appealed. Minnie was one suffragist who actually served prison time. 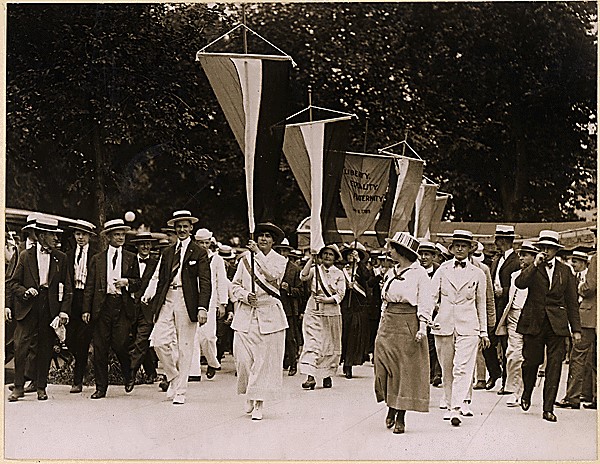 Suffragists picket the White House. Photo shows a crowd outside the White House, Washington, D.C., on July 14, 1917, just before the sixteen woman suffrage pickets were arrested. ***Minnie Abbott is pictured in the photo (as she was in the first group of picketers), but it is not known which one she is. U.S. National Archives’ Local Identifier: 165-WW-(600A)8.