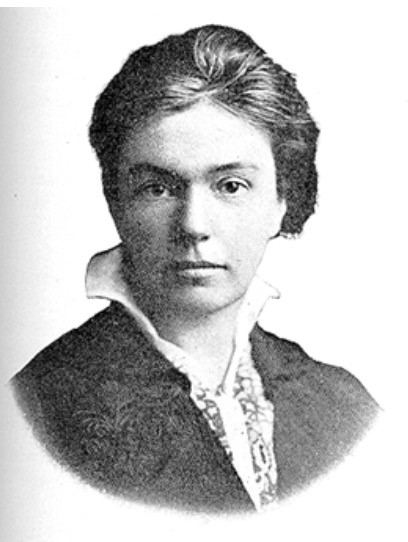 Lawyer and activist, Mary Philbrook, born on August 6, 1872 in Washington, D.C., was the daughter of Harry Baxter Philbrook (1840-1921) and Rebecca Elizabeth Stearns (1845-?). She was the oldest of three siblings- Florence, Robert, and Elizabeth. Her father Harry, a successful lawyer, had a practice in New York City and her mother was a descendent of Isaac Stearns who came from England to Salem, MA on the ship Arrabella in 1630. The family lived in Jersey City, NJ at 59 Sip Avenue. She attended public school #11 and then Jersey City High school, but she did not graduate. Mary apprenticed herself as a stenographer in two Hoboken law offices to learn the law profession. Although she did not finish high school, attend college or law school she was able apply to the New Jersey bar in 1894 because at the time, anyone could simply apply to take the bar exam. Initially her application was denied because New Jersey did not allow women to practice in the state. Supported by the New Jersey Woman Suffrage Association (NJWSA) and women like Cecilia Gaines, Philbrook successfully lobbied the legislature to change the law. In 1885, she was admitted the New Jersey bar at age 22 and became the first woman allowed to practice law in New Jersey. It was stated in The Daily Times, “If Miss Philbrook or any other woman has the desire and the ability to be a lawyer there does not appear to be any good reason why she should not be allowed to use her humanizing influence upon the profession which exists solely because of the natural belligerency of the male sex.”

She argued her first case in front of the Middlesex County Court on July 27, 1897. Along with fellow lawyers Dr. Mary D. Hussey and Miss Mary G. Potter, Philbrook founded the Women Lawyers’ Club in 1899 which was organized because the Bar Association refused to admit women. Initially she worked for Bacot and Record in Jersey City, but eventually started her own practice which in 1902 she moved to Newark, NJ. In 1906 she became the first New Jersey female lawyer to practice in front of the U.S. Supreme Court. Some of her other important work included being appointed the first female probation officer in Essex County in 1902 and serving on the commission headed by Caroline Alexander Wittpenn working to establish the New Jersey Reformatory for Women. In addition, she acted as counsel to the New Jersey Legal Aid Association which she helped found.  She was a strong supporter of penal reform and equal wages for women writing legislation including: a program supporting family and juvenile courts, a women’s factory bill, and an act legitimizing out of wedlock children..

Both her mother and grandmother were avowed suffragists. She was involved with NJSWA in the 1890s, but was generally not active in specific suffrage organizations. Instead she gave speeches and wrote articles championing women’s legal rights. Philbrook wrote a law brief in 1911 arguing for women’s right to suffrage. The brief contended that women had the right to vote under the original New Jersey state constitution of 1776 and insisted that the 1844 constitution was unconstitutional as it limited the right to vote to only male citizens. The court ruled against her, but the brief attracted attention from constitutional experts across the country. During WWI in 1918, while living in France, she was a lawyer for the Red Cross. Upon her return, she focused her efforts on winning women’s equality by working for the Women’s Party at both the state and national levels. She met activist Alice Paul at a suffrage demonstration and supported the militant form of activism of the National Woman’s Party that Alice organized. After the 19th amendment was passed, she worked with Alice on trying to pass the Equal Rights Amendment (ERA). In the late 1930s, she became a member of the National Women’s Party National Advisory council and was chairman of its Archives Committee. She also worked to revive the New Jersey state campaign for the ERA which led to changes in the wording of the New Jersey Constitution insuring equal rights for women in 1947.

One of her memorable quotes was, “My theory would be to give neither sex more privileges that the other. Place them on the same footing and by thus establishing this equality both man and woman will be better able to work intelligently in the business and professional world.”

She worked as a lawyer up until a few years before her death on September 2, 1958 in Point Pleasant, NJ. A lasting testament to her legacy is an award given by the Rutgers School of Law called, the Mary Philbrook Public Interest Award which, “is presented to a woman with a distinguished legal career during which she has removed barriers and created opportunities for other women in the interest of advancing equality in all spheres.”