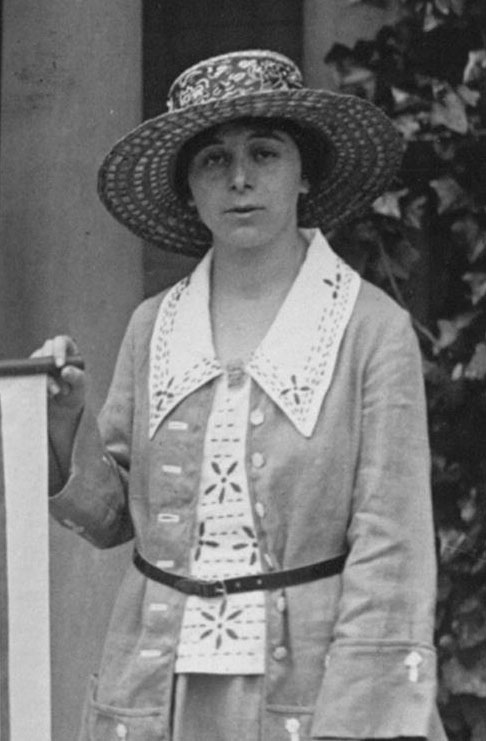 Mary Dubrow was born in Russia on April 14, 1896 to Isidor Dubrow and Kate Cahan. The 1890s was a period of intense persecution of Jews within the Russian empire, and the Dubrows immigrated to the United States shortly after Mary’s birth. They eventually settled in Passaic, New Jersey, where Isidor was a carpenter and Kate worked in a candy store. Mary and her four younger siblings attended the local public schools. Mary later enrolled in New York University, where she studied to be a teacher. Upon her graduation in 1918, teaching was temporarily sidelined by the women’s suffrage movement.

Mary Dubrow joined the New Jersey branch of the National Woman’s Party and worked closely with the state president, Alison Turnbull, who recognized Mary’s talents as a dynamic speaker and organizer. Dubrow played a leading role in the suffragists’ 1918 campaign to unseat New Jersey Senator David Baird, who had voted against the 19th Amendment. Alice Paul had founded the National Woman’s Party in 1916 to attract younger working women to the suffrage movement. Dubrow, a twenty-two year old immigrant, was an ideal member, and Paul now promoted her to be a national organizer for the NWP.

Influenced by the English Suffragettes, Alice Paul and the NWP employed militant tactics, such as public demonstrations and protests, intended to embarrass politicians and gain publicity. Early in 1919, Dubrow joined other members of the NWP in picketing the White House. On January 6, she was arrested with several other suffragists for lighting a “liberty bonfire.” The women refused to pay their $10 fines and were sentenced to ten days in jail. Insisting that they were political prisoners and not criminals, Dubrow and her fellow suffragists went on a hunger strike. After several days, the authorities released the women, fearing that they might die and be seen as martyrs.

Following her release from jail, Dubrow toured the country as part of a “prison special” for the National Woman’s Party. She led rallies in several major cities, such as New Orleans and Chicago. Her activities were covered heavily by the nation’s newspapers, which often expressed their amazement that one so young could be such a forceful and charismatic speaker. Dubrow’s colleagues in the NWP even claimed that her “magnetic personality” had converted Woodrow Wilson to the cause of women’s suffrage.

When Congress finally approved the 19th Amendment in June 1919, national organizer Mary Dubrow went into action. Over the next year she took part in seven state campaigns for ratification. She played a leading role in getting West Virginia’s legislature to ratify the amendment in March 1920. In June Dubrow joined Alice Paul in picketing the Republican presidential convention in Chicago, reminding the party of its promise to support ratification.

After the passage of the 19th Amendment in August, 1920, Dubrow returned to Passaic, where she taught school for the remainder of the decade. Whenever possible, she continued her involvement with the National Woman’s Party. In 1930, Dubrow moved to New York City, where she was to work as a teacher for several decades. During the thirties she began a long association with the American League to Abolish Capital Punishment, serving as the organization’s treasurer for many years. She frequently gave speeches against the death penalty and testified before the New Jersey Assembly in favor of abolition.

After her retirement, Mary Dubrow moved to Los Angeles to live near her nieces. She died there on November 25, 1984. Among the many people she inspired with her activism was her younger sister, Evelyn Dubrow, who became a famous union organizer and Washington lobbyist.

Photo courtesy of the Library of Congress – http://hdl.loc.gov/loc.mss/mnwp.150002