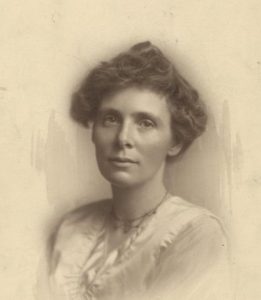 Margaret Brydon Laird was born in Newark, New Jersey on March 28, 1871 to James Brydon and Frances MacDonald. Frances, a Scottish immigrant, was herself an active suffragist and a supporter of Susan B. Anthony. Margaret Brydon trained as a nurse at Newark City Hospital, qualifying in 1895. Her nursing career was cut short by marriage and motherhood. She married Reginald Laird, a Canadian-born pharmacist, and had two children, Margaret and Robert.

In the decade preceding the passage of the 19th Amendment, Laird was extremely active in several different suffrage organizations, usually assuming leadership roles. She was secretary of the Essex County Woman Suffrage Association, a group she helped to found, and vice president of the Women’s Political Union of New Jersey. Laird was involved with both Carrie Chapman Catt’s National American Woman Suffrage Association (as chair of its Newark chapter) and Alice Paul’s National Woman’s Party (as treasurer of New Jersey branch) which was unusual as NAWSA and NWP were rival organizations and often refused to work together. Laird was willing and able to effectively serve both factions. Personally, she tended to favor more militant tactics, and participated in the controversial picketing of Woodrow Wilson’s White House, to protest the president’s lack of support for women’s suffrage. Laird was disappointed that she wasn’t arrested.

In 1920, Margaret Laird and Jennie Van Ness were designated by the Essex County Republican Party as candidates for the New Jersey General Assembly. They both won, becoming the first women to serve in the state legislature. Laird served two terms during which time she supported progressive legislation, such as equal pay for female state employees and separate juvenile courts for youthful offenders. Margaret Laird remained active in local politics, as founder and president of the Women’s Republican Club of Newark from 1926 to 1932.

In addition to her career as a suffragist and politician, Laird was involved in many civic organizations, such as the YWCA, the Red Cross, the New Jersey State Nurses Association, and the Contemporary, a Newark woman’s club devoted to social improvement. During World     War I, Laird led the Contemporary’s Liberty Bond campaigns.

In the 1950s the Lairds retired to Monmouth County, New Jersey. Margaret Brydon Laird died on November 28, 1968, at the age of 97. Just months before her death, Laird gave an interview about her suffrage activities, in which she recalled how “rowdies, beating on pans, would try to shout her down during demonstrations, shouting ‘Go home and wash dishes.’”