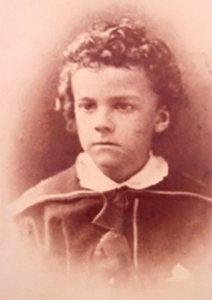 Jenny Higbee as a child

Jenny (Jennie) Higbee Morris was born on December 12, 1871 (or 1870) in Fort Snelling, Minnesota, where her father was stationed along what was then called the “frontier,” on the lands of the Kul Wicasa Oyate – Lower Brule Sioux Tribe.

Jenny Morris’s father, Captain (or Major) Louis McLane Morris (1837 – 1877) was born in Delaware and served in the Union Army from 1861 – 1865. He later joined a regiment that took him out west, where his wife Lydia Higbee Morris joined him.

Ms. Morris’s early childhood was spent in Kentucky, Ohio, and South Dakota. She had an older brother named Louis Morris, who was born in Louisiana (1868 – 1940), and who became a lawyer in New Jersey. She also had a younger brother, John, born in 1871.

Jennie Morris attended Moorestown Academy in New Jersey and later studied painting for four years with the Philadelphia artist Milne Ramsey. She exhibited work at the Philadelphia Academy of Fine Arts. In 1900 she listed her occupation on the United States Census as Artist, and she lived with her mother and brother in Chester, New Jersey. “Jenny H. Morris” is listed as an artist in a Burlington, New Jersey, county business directory from 1895 – 1896, when she would have been around age 24.

“Miss Jennie H. Morris of Moorestown” is listed as recording secretary for the New Jersey chapter of the National American/Woman Suffrage Association from 1900, when she was 29 years old, until 1905 (or 1907 when new secretary elected?). Ms. Morris was elected secretary upon the presidency of Miss Minola Graham Sexton of Orange, who served for five years. Those five years of Sexton’s presidency were particularly active for the New Jersey state chapter, which increased from five local societies to fifteen. These local clubs organized lectures by popular speakers such as Carrie Chapman Catt, Charlotte Perkins Gilman, Florence Fenwick Miller, Susan B. Anthony, and Alice Stone Blackwell. Many rallies were held, as well as press and letter campaigns, and in 1902 they began a tradition of holding annual meetings along the Jersey shore. Of note, in 1903, the New Jersey leagues conducted a study of local government and found that women paid about one-third of the taxes.

In the 1910 Census records, Ms. Morris’s occupation is listed as teacher, and she and her mother Lydia were living together on Prince Street in Bordentown, New Jersey. Ms. Morris began working for The Newark Evening News in 1914 and in the 1915 New Jersey State Census, as well as the 1920 United States Census, her occupation was listed as journalist, and she continued to live with her mother on Prince Street. It is tempting (and logical) to surmise that Jenny Higbee Morris’s entry into journalism may have been inspired by the famous women writers she met through organizing for suffrage, as well as the success of public information campaigns she would have been key in organizing as recording secretary for her state chapter.

Ms. Morris worked for the Newark Evening News for 32 years, retiring in 1946, just three years before her death at age 78. In the winters, she lived in Newark and in the summers she commuted from Bordentown. According to both obituaries in the Newark Evening News and New York Times, Ms. Morris covered education, welfare movements, and women’s organizations. She wrote under the byline “J.H. Morris” because “at the time Ms. Morris came on The News there were very few women reporters in the field and a feeling still existed against them.” (Newark Evening News obit) Jenny was also in charge of the Fresh Air Fund campaign from 1920 until her retirement. She was active in the establishment of the Branch Brook School, a public school for handicapped children, which opened in 1924 and continues to be an inclusionary school. She also worked briefly for the Newark Board of Education between 1946 – 1949.

Ms. Morris did not marry. Her obituary says that she left two cousins, Mrs. Sarah Richmond of Philadelphia and Mrs. William F. Rightor of Flushing, Long Island. Jenny was a member of Grace Episcopal Church in Newark and she, Lydia, and Captain Louis M. Morris are all buried at Trinity Episcopal Church, Moorestown, Burlington County, New Jersey.

Major Louis M. Morris’s collection is shown on an antiques dealer’s site: including a photo of Jenny as a child: http://www.jamesmountainantiques.com/product/major-louis-m-morris-collection/