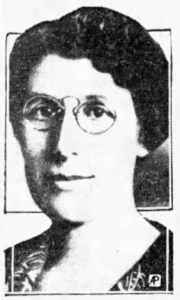 Helene Neilson Simmons, nee Price, was born on December 31, 1876 and grew up in New Brunswick, New Jersey. Her parents were Rodman McCamly Price and Helena Price, born Neilson. Helene and her brother, Charles Frederick Price, were educated by private tutors in their hometown. She later worked with the Christ Episcopal Church and its Sunday school program. In 1880 her parents divorced and her mother remained single the rest of her life.

On October 19, 1898, at age 23, Helene married Harriman Neilson Simmons in a lavish ceremony. Together, the couple had three children: two daughters, Helena Lispenard Simmons Carmer and Mary Noel Simmons, and one son, Harriman N. Simmons. Mrs. Simmons and her family resided in Elizabeth, New Jersey in a home on Clinton Place. In addition, they built a second home in Spring Lake, New Jersey, in 1906. Harriman N. Simmons was a partner in a tea and coffee importing business based in New York City named Bleeker & Simmons. After Harriman died in 1927, Helena became the Vice President of Bleeker & Simmons.

Harriman N. Simmons was from a prominent family of great wealth. His parents were Cornelia Neilson Harriman Simmons and Charles Dewar Simmons. Cornelia’s extended family, the Harrimans, consisted of bankers, stock brokers, and foreign exchange traders. One of her brothers, Edward H. Harriman, left a portion of his fortune to her when he passed away in 1909. Her cousin, J. Borden Harriman, married Florence Jaffray Hurst, who was a prominent New York suffragist. Her nephew was W. Averill Harriman who was the Secretary of Commerce under Truman and the forty-eighth Governor of New York.

Mrs. Simmons’ passion for social activism included participating in the fight for women’s suffrage beginning in 1914. She was hailed as a suffrage leader in New Jersey by prominent suffragists, including Susan B. Anthony and Ida H. Harper. Some of her specific suffrage activities included:

Mrs. Simmons was very opinionated about what the role of the League of Women Voters should be. She said, “The usefulness of the league would be greatly hampered if the women trained in its methods and point of view failed to practice what they preach and abstained in practical work for great issues.” She also said, “If the League of Women Voters can help in any way to clear the air of political propaganda and partisan “bunk” and train a generation of voters to demand of their parties and candidates clear and honest platforms and speeches: to insist that there shall be no equivocation and no promises which cannot be carried out: and then to watch campaign workers so that as few misstatements as possible creep into party speeches, interviews, and publications, it will have justified its existence.”

Helena took a particular interest in civic activism, most notably in advocating for the rights of underrepresented and displaced groups. Like many other suffragists, she focused her work on improving public welfare after the Nineteenth Amendment passed. Mrs. Simmons was a trustee of the South Amboy Christ Church Home, an organization focusing on caring for homeless girls in her diocese. Continuing her involvement with religiously affiliated organizations, she was also involved in the St. John’s Episcopal Church of Elizabeth. She was an active participant in the civic life of Elizabeth working as a volunteer with the Elizabeth chapter of the Red Cross, a member of the board of governors of the Tuberculosis Preventorium for Children, and a member of the New Jersey State Federation of Women’s Clubs. Two of her other passions included advocating for world peace (as a member of the World Court Committee) and enforcement of prohibition laws (as a member of the CFLE).

It has been said that she experienced her greatest fulfillment with her work as president of the Consumers League of New Jersey (CLNJ) from 1930-1935. She was dedicated to eliminating poverty through governmental programs and laws. As president of the CLNJ, she pushed Commissioner Toohey to introduce a Women’s Bureau bill in 1934 to regulate industrial homework. In March of 1936 she spoke on “The Child and Industrial Homework” at a study group of the New Jersey League of Women Voters and showed an exhibit she created illustrating the issue of children working in New Jersey plants.  She became chairman of the Laundry Board (under the CLNJ), which recommended an increase in wages and eliminated distinctions between white and African-American workers in the laundry industry. In 1938, she supervised a team of 300 housewives to conduct a cost of living survey which became the basis for minimum wage orders. Active until just before the end of her life, she was involved with the State Board of Trustees of Glen Gardner Sanatorium, was chairman of the consumer interests committee of the State Council of New Jersey, and was executive secretary of the Consumers League of New Jersey.

Helene Neilson Simmons died in October of 1942 at the age of 66 in her home in Elizabeth, New Jersey, following a short illness. She never retired from her busy schedule and was very involved to the end as executive secretary of the Consumers League and chairman of the Consumer Interests Committee of the Council of National Defense. She was survived by her three children and her contribution to the lasting legacy of the fight for female equality. It is said that she was “a transitional figure who moved between the partisan and social welfare politics of the women’s network”. Her activism moved from working for woman suffrage to social feminism- improving wages, education, and labor laws for women.

(Author’s Note: Discrepancies do occur in the precise spelling of this suffragist’s name. Mrs. Simmons is sometimes referenced by the first name Helene and sometimes by Helena. Her name was sometimes shortened to just her first two initials and then her last name. Additionally, her last name is sometimes written as Simons instead of Simmons, a variation that stems from the fact that her husband’s last name by birth was Simons, but he added an extra “m” when he entered the business world.)

Photograph of Mrs. Harriman N. Simmons taken from her obituary in the October 13, 1942 issue of The Central New Jersey Home News (accessed via newspapers.com)