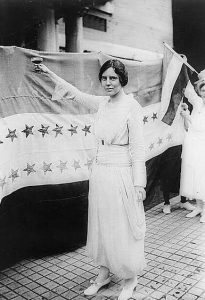 Alice Paul celebrating the ratification of the 19th Amendment in September 1920: from the Library of Congress https://www.loc.gov/pictures/item/97500088/

Alice Paul was the architect of some of the most outstanding political achievements on behalf of women in the 20th century. Born on January 11, 1885 to Quaker parents in Mt. Laurel, New Jersey, Alice Paul dedicated her life to the single cause of securing equal rights for all women. Few individuals have had as much impact on American history as has Alice Paul. Her vision was the ordinary notion that women and men should be equal partners in society.

William and Tacie Paul married in 1881 and moved into Paulsdale their farm, in 1883. Two years later their first child, Alice, was born, followed by William in 1886, Helen in 1889 and Parry in 1895. Alice’s father was a successful businessman and, as the president of the Burlington County Trust Company in Moorestown, NJ, earned a comfortable living.  As Hicksite Quakers, Paul’s parents raised her with a belief in gender equality, and the need to work for the betterment of society. Paul’s faith not only established the foundation for her belief in equality but also provided a rich legacy of activism and service to country.

She attended Swarthmore College for four years, graduating in 1905 with a degree in Biology. She was a member of the Executive Board of Student Government, was named Ivy Poetess, and served as a commencement speaker. Over her adult life Paul earned a total of 6 degrees.

Though Paul’s upbringing was steeped in suffrage ideals, it was during her stay in England (1907-10) that she was transformed from a reserved Quaker girl into a militant suffragist. After working in the settlement movement in New York, Paul left for Birmingham, England, in 1907 to study social work at the Woodbrooke Settlement. It was when she saw an unruly crowd shout Christabel Pankhurst off the stage to prevent her from speaking about suffrage that Alice Paul was galvanized into getting involved in the movement. Christabel Pankhurst was the daughter of England’s most radical suffragette, Emmeline Pankhurst.

The Pankhurst women (mother and two daughters) were leaders of a militant faction of suffragettes whose motto was “Deeds not words.” Believing that prayer, petitions, and patience were not enough to successfully enfranchise women, the Pankhursts engaged in direct measures such as heckling, window smashing, and rock throwing, to raise public awareness about the suffrage issue.They also devised a political strategy to hold the party in power responsible, regardless of affiliation, for women’s secondary status.

Paul joined their movement, personally broke more than 48 windows (according to one interview), and was arrested and imprisoned on several occasions. The suffragettes, including Paul, protested their confinement with hunger strikes and were in turn forcibly fed in a brutal fashion. Alice Paul returned to America in 1910 imbued with the radicalism of the English suffrage movement and a determination to reshape and re-energize the American campaign for women’s enfranchisement. Paul believed that English suffragettes had found the path to victory that continued to elude American suffragists.

While a student at the University of Pennsylvania (1910-12), Alice Paul organized several large-scale events in Philadelphia that woke up the suffrage campaign in Pennsylvania. Upon graduation with a doctoral degree in late 1912, she joined the National American Women’s Suffrage Association (NAWSA). She was quickly appointed as head of the Congressional Committee in charge of working for a suffrage amendment to the U.S. Constitution. In early 1913, Alice Paul and two friends, Lucy Burns and Crystal Eastman, headed to Washington, D.C. to organize for suffrage. With little funding,they organized an elaborate parade along Pennsylvania Avenue on March 3, 1913, the day before Woodrow Wilson’s presidential inauguration. The parade turned to chaos when scores of male onlookers attacked the suffragists, first with insults and obscenities, and then with physical violence, while the police stood by and watched. The following day, Paul’s group of suffragists made headlines across the nation and suffrage became a popular topic of discussion among politicians and the general public alike.

Although Carrie Chapman Catt, NAWSA president, and Alice Paul both shared the goal of universal suffrage, their political strategies were very different. Where NAWSA concentrated a majority of its effort upon state campaigns, Paul wanted to focus all the energy and funding upon a Constitutional amendment.  While NAWSA endorsed President Wilson and looked to members of the Democratic Party as allies, Paul wanted to hold Wilson and his party responsible for women’s continued disenfranchisement. Paul formed the Congressional Union in 1914 and then in 1916, she and her followers severed all ties to NAWSA and formed the National Woman’s Party (NWP).

In January 1917, the NWP organized “Silent Sentinels” to stand outside the White House holding banners inscribed with incendiary phrases directed toward President Wilson.  The president initially treated the picketers with bemused condescension, tipping his hat to them as he passed by. However, his attitude changed when the United States entered World War I in April 1917. Many saw the suffragists’ wartime protests as unpatriotic, and the sentinels, including Alice Paul, were attacked by angry mobs. The picketers began to be arrested on the trumped-up charge of “obstructing traffic,” and were jailed when they refused to pay the imposed fine. Despite the danger of bodily harm and imprisonment, the suffragists continued their demonstrations in front of the White House throughout the summer and fall of 1917.

Many of those arrested were sent to Occoquan Workhouse, a prison in Virginia. Paul and her compatriots followed the English suffragette model and demanded to be treated as political prisoners. Their demands were met with brutality, and as arrests continued, conditions at the prison deteriorated. Paul and several other suffragists began hunger strikes and soon thereafter were forcibly fed.  Prison officials removed Paul to a sanitarium in hopes of getting her declared insane.  When news of the prison conditions and hunger strikes became known, it generated sympathy for the prisoners and brought support to the cause of women’s suffrage. In late November, all of the suffragists were unconditionally released from jail and charges against them were dropped. In January 1918, President Wilson gave a speech to Congress which reversed his position and announced his support for a suffrage amendment.

While many suffragists left public life and activism after the 19th Amendment was enacted, Alice Paul believed the true battle for equality had yet to be won. Following the passage of the 19th Amendment, Paul earned three law degrees (LL.B., LL.M. and D.C.L.). In 1923, on the seventy-fifth anniversary of the Seneca Falls Convention, Paul authored a new constitutional amendment which called for absolute equality stating, “Men and women shall have equal rights throughout the United States and every place subject to its jurisdiction.” In 1943, the ERA was rewritten and dubbed the “Alice Paul Amendment.” The new amendment read, “Equality of rights under the law shall not be denied or abridged by the United States or by any state on account of sex.”The Equal Rights Amendment (ERA) was introduced in every session of Congress from 1923 until it passed in 1972. However, Congress put a deadline of seven years for full ratification by 38 states. After extending the deadline to 10 years, the ERA was three states short of the required 38 when the deadline expired in 1982.

Alice Paul worked tirelessly for the rest of her life to pass the Equal Rights Amendment in the United States and also for women’s rights internationally. She died on July 9, 1977, in Moorestown, New Jersey, just a mile from her birthplace and family home of Paulsdale. When a Newsweek editor asked Paul why she dedicated the whole of her life to women’s equality, she credited her farm upbringing by quoting an adage she learned from her mother, “When you put your hand to the plow, you can’t put it down until you get to the end of the row.”