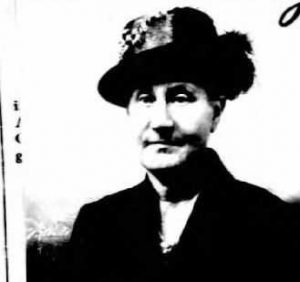 Helen Lippincott was born on April 27, 1863, in Riverton, New Jersey, the daughter of Anna Sutton (1840-1890) and Ezra Lippincott (1936-1906.) Ezra, was a prominent merchant in Riverton and the family belonged to the local Friends Meeting. In 1916 Ezra Lippincott built a home for his daughter at 107 Lippincott Avenue, where she lived for the rest of her life. Her sister, Hetty Coale Lippincott, six years her junior, was also active in the suffrage movement, as were other members of the Lippincott family.

New Jersey was very active in the woman suffrage movement at the turn of the twentieth century. The New Jersey Women’s Suffrage Association was organized in 1867, one of the first in the country. Mrs. Florence Howe Hall, a daughter of Mrs. Julia Ward Howe, was president from 1893 until 1900, and Helen Lippincott served as treasurer of the organization during those five years.

Many suffragists came from Riverton. The town had a large Quaker population and there were close ties between the Quakers and the suffrage movement. Local historical society records note a likely association between Riverton women and noted suffragist Alice Paul, who came from neighboring Moorestown and was also an active Quaker. The records show that many Riverton “clubwomen” were involved in the women’s suffrage movement. They report that Helen Lippincott was a charter member of the Riverton Porch Club, a non-profit organization founded in 1890 for the purpose of inspiring, encouraging, educating and bettering its membership. A socially and civically engaged group, The Porch Club was one of the country’s first organized women’s clubs. In 1904, Helen Lippincott called for the formation of a Suffrage Section, or department, at the Porch Club. The suffrage section was eventually renamed as the Riverton Suffrage League.

In the next few decades, Helen Lippincott continued her suffrage activities at the local, state, and international levels. She also served as a delegate to the 1912 National Convention of the Women’s Suffrage Association. At the forty-third meeting of the group, she was listed as a delegate and life member, and at the 1914 meeting she was made a member of the executive committee.

The New Jersey Woman Suffrage Association grew rapidly with Helen Lippincott as an active member. Its membership grew from 2,200 in 1912 to more than 6,000 a year later.

In August of 2013, Helen Lippincott took part in a demonstration in Washington, arranged by the National Congressional Committee, at which petitions were presented to the Senate asking for the immediate submission of the Federal (suffrage) Amendment.

At the annual convention held in Newark in November 1913, she joined the organization’s board as second vice-president.

Helen Lippincott was one of 12 delegates from the United States listed in the program for the eighth congress of the International Women’s Suffrage Alliance, an assemblage of women from 31 countries who met in Geneva in June 1920. The conference was led by Carrie Chapman Catt and was the first such conference to be held after World War I and after the passage of the Nineteenth Amendment in 1919.

Helen Lippincott’s passport application in March of 1920 indicated her reason for traveling was to visit the women’s conference in Geneva, followed by a stay in London for a Friends’ Conference. She sailed from New York on May 19.

Helen Lippincott died on December 15, 1955 in Philadelphia, Pennsylvania, at the age of 92. She was buried in Westfield Friends burial ground Cinnaminson, New Jersey, a town neighboring Riverton.

Helen Lippincott photo posted to Lippincott family tree on Ancestry.com by Tad Dykes on May 11, 2017. Permission to use this photo has been requested, no response to date.