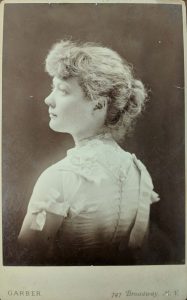 Florence Lillian Haines was a music teacher, suffragist, and legislator. Born on December 26, 1869, she was the daughter of Jared Haines, a Newark attorney, and Julia Moore (Ross) Haines. Julia Ross was a member of several old colonial families including Caleb Camp (1736-1816) who was a deputy from Essex County, NJ to the Provincial Congress 1775. Florence and her 9 siblings grew up in Newark, NJ. She was educated in Newark public schools and graduated from the state normal school (now named Kean College). In a senior essay, she challenged her classmates to remember that, “each word and deed may bear fruit for good or evil through unknown ages” showing an early penance for social service. After college, she was hired as a music teacher at the Monmouth Street School in Newark. Next she became the vice-principal at the Franklin School and in less than a year, was named assistant music supervisor for the entire Newark school system. Finally, she held the post of supervisor of music for the entire Newark school system from 1915 until her retirement in 1933. During WWI, she served as an ambulance driver in the Motor Corps for the National League for Women’s Service driving between the Brooklyn Navy Yard, Camp Merritt, and after the Morgan ammunitions plant explosion. In recognition of her home front service, she was made an honorary member of the Melvin Spitz Post, Disabled American Veterans of the World War.

An active member of the New Jersey Women’s Political Union (NJWPU), she worked with the Newark branch to help secure ratification of the 19th amendment in 1920. Her involvement in the NJWPU included serving as its secretary. In addition, she was the vice-chairman of the Votes For Women Ball, held at the Palace Ball Room in Newark in November 1914. She attended the 48th NJWSA convention in Atlantic City in September of 1916. When the NJWPU was folded into the New Jersey League of Women Voters (NJLWV), Haines became a charter member of the Newark League of Women Voters. After working her way up through the ranks of the Newark Republican Party, Haines successfully ran for the New Jersey Assembly representing Newark in 1926. She served for five consecutive 1 year terms. As an assemblywoman, she served on several committees concerned with education and the handicapped. She was chairman of the Assembly Education Committee and the Joint Committee for the School for Feeble-Minded Children. She also served on the Assembly Appropriations Committee. She fought for better educational opportunities for the children of migrant workers trying to create laws that barred employers from hiring these children during the school year. In 1927, she introduced a motion picture bill which made the showing of lewd or indecent dramas, plays, exhibitions, movies, or entertainment a misdemeanor subject to appropriate police action. The bill was defeated but she continued to reintroduced it every year from 1928-1930 to no avail.

In 1932 she founded the Organization of Women Legislators of New Jersey (OWLs) and was its first president. The group consisted of past and present female state legislature members. Their main purpose was to help elect more women, to obtain more appointments to public office, and to help new legislature members function effectively. In 1938, at a meeting in Washington, D.C., the OWLs formed a national organization and Haines was elected as one of its four vice-presidents. She partnered with Mary Philbrook on the Committee to Eliminate Discriminations Against Women which advocated to add an equal rights clause to the New Jersey state constitution.

In 1955, after a long illness, she died at age 85 and is buried in Newark at the Mt. Pleasant Cemetery. At the end of her life, she was cared for by her sister Margaret Haines who was also a former New Jersey Assemblywoman. They were the first sisters to serve in the New Jersey State Legislature. Margaret was also active in the woman suffrage movement as documented in photos, but little was written about her participation. 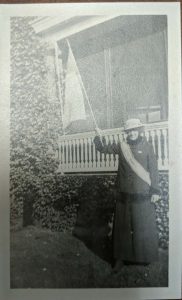 For more info on Florence Haines – Special Collections and University Archives at Rutgers has her family letters in the Ross-Haines-King Family Papers (MC 929) and documents from the Newark League of Women Voters (MC 1082, stored off-site)