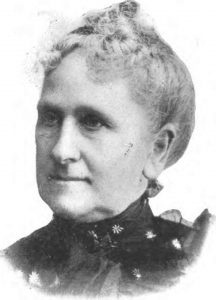 Emma Bourne was born in Newark, New Jersey on September 5, 1842 to John Hill, a hat maker who had immigrated from England, and Mary Gordon Barnett. Emma Hill attended the Wesleyan Institute and the Newark Normal School. She was a teacher in the Newark schools for seven years until her marriage to Henry James Bourne on January 13, 1868. The Bournes spent much of their early married life in Europe, and three of their four children were born in the British Isles. Henry Bourne’s death in the 1880s left Emma with four young children to support. She worked for many years in the life insurance business and lived with her sister’s family in Newark.

Emma Bourne’s support for women’s suffrage grew out of her longstanding involvement with the temperance movement and her leadership positions in the Woman’s Christian Temperance Union (WCTU). Founded in 1873, the WCTU sought to end the problems alcohol consumption caused for families by promoting abstinence and waging war against saloons and the liquor industry. Emma Bourne’s mother, Mary Hill, became president of the Newark branch of the WCTU in 1874. From 1881 to 1891, Bourne served as Recording Secretary for the New Jersey WCTU and from 1891 to 1910 as the State President. A compelling speaker and energetic organizer, Bourne greatly expanded the organization throughout the state. By the late 1890s, the New Jersey WCTU was growing faster than any other state chapter in the United States. Bourne even created a small publishing company to produce temperance literature at a third of the cost charged by commercial printers.

In 1881, the WCTU, under national president Frances Willard, endorsed women’s suffrage. As the largest women’s organization in the United States, with a membership of over 150,000, the WCTU offered the suffrage movement a vast network of local organizations and significant financial resources. In New Jersey, Emma Bourne welcomed suffrage speakers to WCTU events and she participated in suffrage rallies. When the New Jersey Woman Suffrage Association held its annual convention at Ocean Grove in July, 1904, Bourne helped organize the meeting, and she formally welcomed the suffragists to this “dry” town. In October 1914, the New Jersey WCTU endorsed a constitutional amendment for giving women the vote. Temperance leaders, like Bourne, argued that with the ballot, women “could vote their principles for the abolition of the liquor traffic, for the extermination of vice, for child protection and for an equal standard for men and women in business and society.”

Emma Bourne retired as New Jersey WCTU president in 1910, but was given the title “honorary president” in recognition of her long and distinguished service to the organization. Bourne remained active in the Newark chapter of the WCTU, where she served as Recording Secretary, and she continued to speak at temperance meetings. In 1914, Bourne delivered a rousing speech on “A Saloonless Nation in 1920” at a WCTU convention in Trenton. She lived to see Prohibition go into effect in 1920, as she had predicted. In her final years, Emma Bourne lived with her daughter Elizabeth in Morristown, New Jersey. She died there on October 5, 1924 at the age of 82. She is buried in the Rosedale Cemetery in Orange, New Jersey.