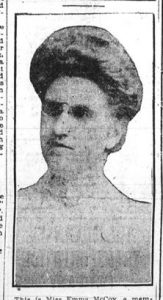 Emma August McCoy was born on March 4, 1884 to Goyn D. and Louisa McCoy in Franklin, N.J. She had three sisters and lived in New Brunswick, N.J. for most of her life. Her father was machinist. The family was active in the Dutch Reform Church where Goyn was a founding member of the Second Reformed Church congregation. She was valedictorian of New Brunswick High School and graduated with a degree in art from Cooper Institute in New York City.

She campaigned for the rights of teachers at the state level. In 1909, she worked to pass a bill called the Teachers Tenure of Office Bill. She was a proponent of equal pay for equal work which was the goal of the Middlesex County Women’s Teachers Association, of which she was President in 1910. During the years of 1913-1918, she worked tirelessly to have the New Jersey Teachers Retirement Fund put under state control so that there would be better management of the fund. At the time, the New York City and Philadelphia pension systems had been declared insolvent. She said, “We want the law changed: we want some guarantee that our money is being safely invested.” She also worked to change the teacher’s pension fund structure. She advocated, “When this has been done, then a new law should be drafted fixing the percentage of contribution which each teacher should make is in proportion to his or her salary and the number of years in Public School service.”

In 1909 she had not yet joined the Suffrage movement, but was considering it. She joined the cause in 1911 and became very active in promoting women’s rights. At the 1911 convention of the Equal Justice League, Miss McCoy, the President of the New Brunswick Teachers Association, made a plea for equal pay for women teachers. In 1912, she organized the New Brunswick Political Study Club (NBPSC) and served as its first president. She invited Dr. Anna H. Shaw, Mrs. Florence Howe Hall, and Clara S. Ladley to the Middlesex County Teacher’s Association luncheon in 1912 as the featured speakers. Mrs. Shaw sent a letter back to Miss McCoy saying that she would try to attend as she felt, “To teach teachers, one can reach a large field.” At the closing of the luncheon, Miss McCoy said, “I would like to close this luncheon by singing ‘America’ but we can’t, as it would be like telling a falsehood to do so it not being a ‘Sweet Land of Liberty’ yet.” At the luncheon she made a plea for the establishment of a college for women in connection with Rutgers since most professors, at that time, did not want women in their classes.

Miss McCoy was the guest editor for the Special Woman Suffrage Edition of The Daily Home News on October 19, 1912. In one article, as the editor, she talked about why women should vote saying, “Look at the brainy, capable women of today, who are working for the betterment of the world, giving not only their time, but their money and their lives to the work. They are ALLOWED to pay taxes, but they are NOT allowed to have one word to say as to the disposal of those same taxes.” She also wrote other articles for the paper including stories on Jane Addams, Teddy Roosevelt and the Progressive Party, and Why Women Should Vote. When asked why she became a suffragist, (reported in The Daily Home News on 10/26/1912) she replied, “I was born a conservative Democrat and probably would have remained so if I had not gone out into the world to make my living and mingled with the people, and learned the ways of the world. It is just two years ago next November that I joined the suffragette movement and it was all through a salary incident. I was looking over the schedule of salaries for the teachers and discovered that a man who had been a member of the High School Faculty for only two years was getting far in excess of my salary. I asked why and was told, “Oh, because you are only a woman.” “Only a woman,” I repeated. I went home to my family and said, “I’m going to become a suffragette from this time on.”

In a letter sent to The Daily Home News, she asked them to publish an announcement for the suffrage “Auto Parade” on August 15, 1912 that was going to be held in New York. She was not totally in favor of the parade but she said, “Personally I don’t enjoy quite such demonstrations, but suppose I shall have to get over my conservative ideas about ‘parades’ and ‘open-air meetings.’ The very best women in the country are ‘doing it’ so WHY SHOULDN’T I?” There is a picture of her with other suffragists standing in Monument Square on August 15, 1912 after a suffrage meeting. She did march in the New Jersey Suffrage Parade in Newark on October 26, 1912 and carried a banner. Approximately 1,000 men and women participated in the march. In February of 1913 the NBPSC hosted a meeting where Lillian Feickert and Caroline Alexander spoke to the group.

She wrote many articles for The Daily Homes News from 1912-1920. Additionally, she was a prolific letter writer and kept correspondence with notable persons including: Dr. Anna Howard Shaw, Jane Addams of Hull House, and Austin Scott, the Mayor of New Brunswick. The Daily Home News wrote on August 19, 1920 that, “The first suffrage league in New Brunswick was organized by Miss McCoy in 1912 and she was its first President. Miss McCoy inspired the women to keep going in the work, even when days looked darkest, as she was firm in the belief that women world come into their own.” As the Superintendent of the New Brunswick Public School, she continued to advocate for teachers and students until her retirement. She never married and led a very active life until her death on February 14, 1945. She is buried at Willow Grove Cemetery in New Brunswick, New Jersey.

Special thanks for the following librarians for their research help: