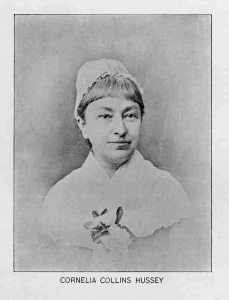 Cornelia Collins Hussey was born in NYC on July 7, 1827 into a family which had been, for many generations, members of the Society of Friends. Like many Quakers, Cornelia was an avowed abolitionist and a pacifist. These were not creeds to which she merely gave lip service. For example, as a young adult, she was one of the managers of the Colored Orphan Asylum in New York, and she also became a dedicated supporter of the Universal Peace Union.

Cornelia married William H. Hussey of New Bedford on April 16, 1851 in the city of her birth. The couple settled in the Orange, NJ area and had three children: Mary, Frederick, and George. Pillars of the community, the couple hosted salons and donated to many charitable organizations. For example, Cornelia was one of the fourteen original members of the Women’s Club of Orange, started in 1871. Some of her many other patronages included the New York Infirmary for Women and Children, the American Purity Alliance, and the New Jersey Legal Aid Association.

Cornelia took a more active interest in women’s suffrage as her children matured. She held various roles in state and national suffrage organizations for decades. For example, she was made vice president of the New Jersey Woman Suffrage Association in 1882. She became a member of the executive committee of the National American Woman Suffrage Association in 1887. Though she did speak and publish articles in support of suffrage, she often said that she knew neither speaking nor writing were her real talents. Instead, she claimed, she had a talent for raising money and therefore that was her primary focus.

One of the writing projects on which Cornelia did work, when not raising that money, was the controversial but best-selling late 19th-century Woman’s Bible. Elizabeth Cady Stanton, who organized the project, was quoted in newspapers in 1896 as saying, “Listening to the varied opinions of women, I have long thought it would be interesting and profitable to get them clearly stated in book form. To this end six years ago I proposed to a committee of women to issue a Woman’s Bible, that we might have women’s commentaries on women’s position in the Old and New Testaments. It was agreed on by several leading women in England and America and the work was begun, but from various causes it has been delayed, until now the idea is received with renewed enthusiasm, and a large committee has been formed, and we hope to complete the work within a year.”

Cornelia died on October 13, 1902 of a stroke. She had been in failing health for some time, though her daughter reported that her spirits were high until the end. Though living at 142 North Arlington Avenue in East Orange at the time, she passed away while visiting Connecticut. She was 76 and survived by her husband and three children. The Universal Peace Union said, in memoriam, “Her life stands out as one of the foremost characters of our time in her deeds of mercy, her generous aid, and her untiring and unselfish devotion to the welfare of humanity.”

Upon her death it was widely reported that Cornelia made one last charitable donation, bequeathing $10,000 to the National American Woman Suffrage Association. Her activist legacy lived on, too, in her daughter Mary, a medical doctor who was also committed to the cause of women’s suffrage.

Photo downloaded via the Library of Congress Prints and Photographic Division online:  https://goo.gl/images/yYtLgU