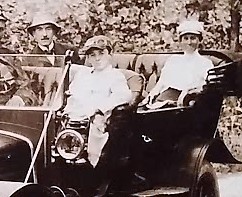 Bessie Pope on her way to Beaver Lake in the Adirondacks in 1912, with brother John Edward and nephew James Noble Pope.  (Courtesy of Charles Pope)

Chair of the New Jersey Woman Suffrage Association committee on Industrial Problems relating to Women and Children in 1910, member of the Joint Legislative Committee

Bessie Pope was born August 27, 1867, to Thomas John Pope and his wife, Catherine Ann Buxton, in Jersey City, New Jersey. Her father and uncle had established a successful company, acting as international agents for buyers and sellers of iron products. In addition, her mother was a member of a prominent New England family. She had one sister, Catherine, and three brothers.

Bessie attended private schools in New Jersey and graduated from Miss Porter’s School for Young Ladies in Farmington, Connecticut, in 1885. Relieved of the need to earn a living, Bessie, who would remain unmarried, took up the causes that interested her. She was a member of the Women’s Auxiliary of Whittier House in Jersey City, and was on the Board of Managers of the State Home for Boys. She was very active with war relief work during WWI, and was chair and co-chair of five Liberty Loan Drives.

Her main interest from 1909 to 1919 was her work with the New Jersey Womans Suffrage Association. At the 1910 convention, four new committees were added to the workings of the group. Bessie was appointed chair of the Industrial Problems Relating to Women and Children committee. Governor Woodrow Wilson attended that convention and added his support to the efforts of the women.

In 1912, at the 22nd annual convention of the association in Trenton, New Jersey, Lillian Feickert was elected to the first of eight terms as president. In front of the membership, she recounted how she and Miss Pope had canvassed the neighborhoods of Jersey City and added 4,000 new members to the group. At the conference, Bessie was elected auditor of finances. Her sound financial mind, which had been proven when she was briefly the president of her brother’s trading company, was put to use by the association.

World War I put the activities of the suffragettes on hiatus. However, the suffragettes remained socially active as they operated the Soldier’s Clubhouse and Canteen. The good will created by that served them well after the war when the battle for the 19th Amendment was reignited. Political chicanery in 1918 involving newspaper articles, advertising and outright lies by a large contingent of New Jersey men who tried to doom the amendmentmet with failure following a fierce campaign.

With the passage of the amendment, Bessie’s interests became more family-oriented. She lived with her widowed brother, John Edward, and helped him raise his son, James Noble Pope, on Summit Avenue in Jersey City.

While Bessie was a woman who liked challenges, she enjoyed life’s pleasures. With her brothers’ families, she organized camping trips to their summer home on Beaver Lake in New York’s Adirondack Mountains. There are also records of her and her nephew, James, traveling home from Europe on the Empress of Australia in 1938, shortly before WWII.

Her grand-nephew, Charles Pope, reported that his great-aunt was also a savvy investor and left a sizeable estate for the people and causes she loved. She died July 27, 1953, of heart disease at a health spa in rural Pennsylvania and was cremated.

Manual of the Legislature of New Jersey, 1922, Board Managers of the State Home for Boys, Jamesburg, (Trenton, New Jersey: Josephine A. Fitzgerald), page 618. https://archive.org/details/manualoflegislat1922mull/page/618