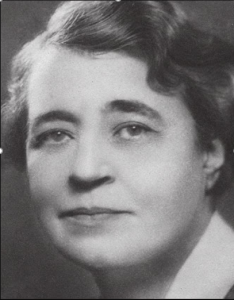 Amelia Berndt Moorfield was born in Newport, Kentucky on April 17, 1876 to Caroline Marsh and Gustave Berndt. The family moved to Newark, New Jersey when Amelia was an adolescent. She demonstrated an interest in social work from a young age, and her marriage in 1909 to Frank Moorfield, a wealthy industrialist, gave her the leisure and resources to engage in philanthropic and progressive causes. The Moorfield’s only child, Hannah, grew up with the suffrage movement and later joined her mother in working for world peace.

In 1914, Mina Van Winkle, president of the Women’s Political Union of New Jersey, recruited Moorfield to the cause of women’s suffrage. Within a year, Moorfield had become financial secretary of the WPU, charged with fund raising for New Jersey’s 1915 referendum to give women the vote. Although that measure was defeated, Moorfield proved adept at raising money for the cause by sponsoring luncheons and ballroom dances. She also amassed an impressive collection of literature, both pro and con, on the suffrage question, enabling the suffragists to more effectively counter their opponents.

Moorfield was especially sensitive to the charge that women would become masculinized through voting and political participation. She sought to allay male fears that suffrage would cause women to abandon their domestic responsibilities. Moorfield also objected to the more militant tactics of Alice Paul’s National Women’s Party such as noisy demonstrations and pickets of the White House.

Following the passage of the 19th Amendment in 1920, Amelia Moorfield became involved with the international peace movement. Her husband’s death in 1923 left her a substantial inheritance with which she could support progressive causes. Moorfield joined the Women’s International League for Peace and Freedom (WILPF) in 1922, and she campaigned for disarmament and in support of the League of Nations. The organizational skills Moorfield had developed in the suffrage movement proved valuable, and by 1927 she had risen to New Jersey state chair of the WILPF. Her daughter, Hannah Shannon, was a close associate in the peace movement, serving as publicity chair of the New Jersey WILPF.

Moorfield was alarmed by the rise of Fascism in Europe. She joined the American League Against War and Fascism and was an outspoken critic of Nazi persecution of Jews. When Mussolini invaded Ethiopia in 1935, Moorfield organized a picket of the Italian consulate in Newark. She also organized boycotts of stores selling German goods.

For the remainder of her life Moorfield was active in civic affairs, serving as president of the New Jersey Women’s Press Club. She died on February 24, 1950 at age 73. Amelia Moorfield’s valuable archive documenting the women’s suffrage movement is preserved at the New Jersey Historical Society in Newark.