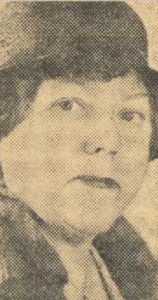 Bertha Violet Shippen was born on October 18, 1876 in St. Louis, Missouri, the daughter of Elizabeth Jones Winslow and Judge Joseph Shippen. One of Elizabeth Jones Winslow’s ancestors, Kenelm Winslow, came over on the Mayflower. Another ancestor, Peter Folger, was one of Nantucket’s first settlers and was Benjamin Franklin’s maternal grandfather.  Members of the Shippen family were prominent in the 18th & 19th century in the Philadelphia area. Edward Shippen III (1703-1781), her great great grandfather, was one of the founders of both the College of New Jersey in 1746 (which became Princeton University in 1753) and of the Philadelphia Academy (which later became the University of Pennsylvania). Edward III was also the founder of Shippenburg, PA, and in 1744 was elected the mayor of Philadelphia. Edward III’s brother, Dr. William H. Shippen Sr. (1712-1801), was a doctor and a member of the Continental Congress. In 1750, Dr. William H. Shippen Sr. and his son Joseph W. Shippen built a mansion called Old Shippen Manor that still stands and is a museum in Oxford Furnace, NJ. Bertha’s great aunt, Margaret (Peggy) Shippen (1760-1804), was the second wife of Benedict Arnold. Her great grandfather, Coronel Joseph Shippen Jr. (1732-1810), graduated from Princeton in 1753, was Secretary to the Governor of Pennsylvania (William Penn), and was a judge at the county court in Lancaster, PA.

Bertha’s father, Judge Joseph Shippen (1839-1923) graduated from Harvard and was appointed as the commissioner to hospitals in Philadelphia. The family moved around first settling in Missouri, then by 1880 in Yonkers, NY, by the 1890s in Chicago, IL, and by 1909 in Philadelphia. Initially, Bertha attended public school in Chicago and later studied in private schools in Heidelberg, Stuttgart, Paris, and Geneva. She graduated from the Faelten School of Music in Boston and became a successful piano teacher in both Chicago and New York. In addition to her formal schooling, she helped teach music and English classes at Hull House in Chicago under the direction of Jane Addams.

On February 21, 1899 she married Robert Archibald Irving in Chicago. They had four children, Helen Elizabeth, Margaret, Robert Shippen, and Edward Winslow. The Irving family moved around a lot first residing in Chicago, Pittsburg, and then in Philadelphia. By 1911 they had moved to Haddonfield, NJ (401 Warwick Road) where Mr. Irving had his own insurance business. Robert A. Irving ran for Congress in 1914, but was defeated by Frank F. Patterson. In June of 1929, her husband passed away. Bertha’s son, Robert Shippen Irving (1909-1980), became a respected banker in Philadelphia. From 1934-1940 he served as an underwriting supervisor for the federal Housing Administration, and served as treasurer for the National Corporation for Housing Partnerships in Washington from 1970-1973.

Bertha was active in the woman suffrage movement and like many suffragists, was also active in the Women’s Christian Temperance Union (WCTU). Starting in 1915, Bertha’s suffragist activities included giving speeches and lectures at many meetings across New Jersey, New York, and Pennsylvania. She was the Camden County chairman of the New Jersey Woman Suffrage Association (NJWSA) from 1915-1917, the president of the Haddonfield Woman’s Political Union, and the Congressional Chairman of the Third Congressional District of New Jersey. The January 1916 NJWSA convention’s focus was analyzing the reasons why women’s suffrage had been defeated in the fall and Shippen was a featured speaker. Throughout 1917, she also actively campaigned for women’s suffrage in New York State and was a Vice President of the New Jersey Women’s Political Union. In January 1920, she led a large delegation of the New Jersey Woman Suffrage Association to Trenton to present a petition for ratification by the State Legislature. The petitions came from every county in the state and had an estimated 200,000 signatures. The delegation first marched through Trenton to Crescent Hall for a huge rally where Carrie Chapman Catt spoke.

Bertha’s political involvement began after winning the right to vote. In the years 1920, 1921, 1922 she ran unsuccessfully as a candidate for the New Jersey State School Board.  An ardent Democrat, at the 1924 New Jersey Democratic National Convention, she served as an alternate delegate representing the 1st District. For 13 years she was a member of the Camden County Democratic Committee serving several years as vice chairman.

In addition to the women’s suffrage movement, she was very involved in civic issues including temperance and prison reform. Some of the organizations she was involved with were: Daughters of the American Revolution, Legislative Committee of the State Federation of Women’s Clubs, Women’s Christian Temperance Union (WCTU), Mothers’ Congress of New Jersey, Women’s Committee of the Council of Nation Defense (during WWI), New Jersey League of Women Voters, State Executive Board of the Consumers’ League, and Philadelphia Music Club. A very active and outspoken member of the state board of education, Shippen also lobbied for temperance education in high schools and was appointed to the State Board of Regents n 1932. Although she had been very active in the temperance movement, in 1926, the Camden county branch of the WCTU ousted her from its membership because of her statements that prohibition had been a failure and that temperance would best be achieved through education of youth.

In June of 1933 she was named acting postmaster of Haddonfield and was nominated for the permanent job by President Roosevelt. Confirmed by the Senate in 1936, she was the first woman to hold this position. In her later years she lived at 228 King’s Highway East in Haddonfield, NJ. She passed away at home on March 26, 1945. 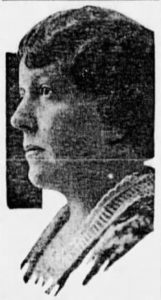 www.methleyarchive.org  (For additional information there is a collection of Shippen family letters at The Winterthur Library)

New Jersey Department of Education, “Mrs. Robert A. Irving appointed a member of the State Board of Education,” Education Bulletin, Volumes 8-9, June 1923, pg. 186-187.