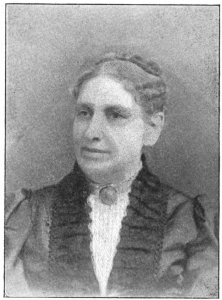 Anna Rice Powell campaigned throughout her adult life for racial and gender equality, and became a key advocate for social purity, temperance, and women’s suffrage. Born Judith Anna Rice on February 15, 1834, she spent her childhood in Worcester, Massachusetts with her parents Sewell Rice (1798–1882) and Hannah Drew (Washburn) Rice (1802–1894) and two older sisters Nancy (1828–96) and Amelia (1830–52). Her great-great-grandfather on her father’s side, Jonas Rice (1672–1753), was the first settler of European descent in Worcester. Her mother’s ancestry traced back to Elder Brewster (1566–1644) of the Mayflower pilgrims. Anna attended Worcester Classical and English High School from 1845 to 1848. Then, following two years (1850–52) at Worcester’s Oread Collegiate Institute, she moved to Utica, New York, where she worked as a schoolteacher for seven years.

While living in Utica in February of 1861, Anna contributed to a collective run by activist Susan B. Anthony (1820–1906) for the American Anti-Slavery Society. Around this time, she met Aaron Macy Powell (1832–99), a Quaker who was active in the abolition movement. The two married on April 15, 1861, in Ghent, New York. Due to Anna’s Baptist upbringing, no Quaker minister would preside over the wedding, so the couple married themselves without a minister or public official. Anna and her new husband announced their marriage through a letter printed in several local papers stating their “united protest against the inequality and injustice of the statutes of the civil code pertaining to marriage, which assign to the wife a position of legal inferiority.” Following the wedding, Anna joined the Religious Society of Friends (Quakers), likely in response to the Baptist Church’s stance on slavery.

By July 1861, Anna had been elected president of the Ghent Anti-Slavery Society.In this capacity, she published an open letter to President Abraham Lincoln (1809–65) urging the swift emancipation of all enslaved people who aided the Union troops during the Civil War. The following year, she served on the Finance Committee of the New England Anti-Slavery Convention. The Powells’ increasing involvement in the abolition movement made Aaron, in particular, a target of anti-war sentiment. In 1864, the couple moved from Ghent to New York City.

Shortly after their move, Anna shifted her focus from abolition to women’s rights. Despite the birth and early death of her daughter Elizabeth (1864–67), she traveled to Boston in 1866 to attend the inaugural meeting of the American Equal Rights Association, where she served on the Finance Committee. In 1872, she co-founded the first women’s club in New Jersey. Anna and her husband moved from New York City to Plainfield, New Jersey in 1880. They were very active in the woman suffrage movement; both holding executive positions in several organizations. By 1895, Anna had joined the New Jersey Woman Suffrage Association (NJWSA) and had been elected president of the Union County Woman Suffrage Association. In the years 1900-1907, she served on the board of the NJWSA as an auditor. Aaron, also active in the NJWSA, was a board member and auditor for many years. He gave his last address before he died titled, “Woman Suffrage in England,” at a January, 1895 NJWSA meeting.

Anna soon became involved in the social purity movement, a faction of the women’s rights movement dedicated to empowering women through education and suffrage in order to stop the spread of prostitution. Alongside her husband, she campaigned with the New York Committee for the Prevention of State Regulation of Vice against legislation designed to legalize prostitution in New York, and supported efforts to raise the state’s age of consent. In 1883, the Powells served as American delegates to the Third International Congress of the British, Continental, and General Federation for the Abolition of Government Regulation of Prostitution at The Hague. Anna went on to lecture at several meetings of the National American Woman Suffrage Association, the Association for the Advancement of Women, and at the 1885 World’s Temperance Conference in Philadelphia. At the 1893 World’s Parliament of Religions in Chicago, she was appointed to the planning committee for the World’s Congress on Social Purity.When the New York Committee expanded to become the American Purity Alliance, Anna continued her involvement in the organization as corresponding secretary and later treasurer. She also served as associate editor of the Alliance’s periodical The Philanthropist, which Aaron had founded and edited. In 1896, the couple again traveled to Europe as delegates to the International Federation for the Abolition of State Regulation of Vice in Bern, Switzerland.

On May 13, 1899, Aaron died suddenly at a convention in Philadelphia. Anna swiftly published his memoirs, Personal Reminiscences, and replaced him as superintendent of the Society of Friends’ Department for the Suppression of Demoralizing Publications, and as a member of the publication committee for The Philanthropist. She continued to serve as a delegate to the International Federation, and in 1905, she joined the General Friends Conferences Union for Philanthropic Labor, which campaigned against the proliferation of liquor licenses. By 1904, although Anna maintained a residence in Philadelphia, Pennsylvania, she retained the majority of her appointed positions and returned to New Jersey frequently to attend meetings and conventions.

Anna died of pneumonia at age eighty-one in a boarding home run by the Germantown Society of Friends in Philadelphia on March 27, 1915. She was buried in Ghent with the epitaph, “A life gentle, devoted, sincere.” 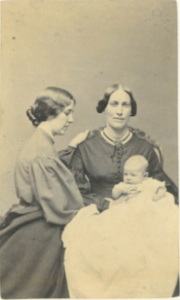