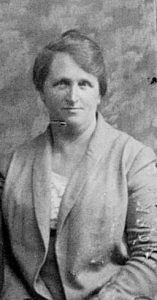 Anita Mary Stillman was born in Hoboken, New Jersey, on December 13, 1887 to Thomas Bliss Stillman, a chemical engineer and professor at the Stevens Institute, and Emma Louise Pomplitz. After attending primary school in Hoboken, Miss Stillman graduated from the Comstock School, an elite finishing school for young women in New York City, in 1905. She later spent two years studying chemistry at Columbia University.

During the early 20th century, Anita Stillman was frequently mentioned in local papers as a “Hoboken society girl” active in philanthropic work. She attended benefit concerts and appeared in amateur theatricals to raise money for charities. She was especially energetic in her work for the Red Cross. During World War I, Stillman served as secretary for the New Jersey Red Cross, managing membership drives and fundraising campaigns for the organization. For a time she also worked for Christ Hospital in Jersey City and served on the editorial board of the Jersey Journal newspaper.

Around 1914 Stillman became a member of the Equal Franchise League of Hoboken. She campaigned actively for the 1915 New Jersey State Referendum on Women’s Suffrage. Stillman visited factories and businesses in Hoboken, passing out literature and polling workers. She also sold suffrage newspapers at the town’s ferry terminals and train stations. Although the referendum was defeated, Stillman’s work caught the attention of state suffrage leaders, and in 1916 the Woman Suffrage Association of New Jersey chose her to be their auditor.

In 1917 Anita Stillman worked with a group of New Jersey suffragists in establishing and running a recreational center for soldiers at Camp Dix, in Wrightstown, New Jersey. During World War I Stillman, like many other suffragists, put her suffrage work aside to concentrate on war work. This strategy was intended to demonstrate suffragists’ patriotism and to convince the government that women were vital citizens deserving the vote.

On April 19, 1917 Anita Stillman married Emmet Augustus Quarles, a journalist and conservationist who later worked as a businessman. The couple moved to Connecticut and eventually had four children. Anita Stillman Quarles immediately became involved with suffrage work in Connecticut, serving as publicity director for the Woman Suffrage Association of Stamford.

In 1920 the Quarles family moved to Plainfield, New Jersey, where Anita and Emmet resided for the rest of their lives. She remained committed to community service and held several important public offices. In 1923, Mrs. Stillman Quarles was appointed to the Plainfield Board of Health and in 1927 she was elected to the Board of Education. In 1930 the governor appointed her to the board of managers of the New Jersey Reformatory for Women and in 1933 she became the first woman elected to the Plainfield town council. Beginning in 1938, she became a deputy sheriff for the Juvenile and Domestic Court of Union County, a position she held for more than twenty years. Stillman Quarles was also a longtime member of the League of Women Voters and the New Jersey Birth Control League. In 1943-44 she served on the board of trustees for Union College.  Anita Stillman Quarles died in Edison, New Jersey on February 26, 1971, at the age of 83.

Photo of Anita Stillman Quarles from her passport from the National Archives (public domain).