Norman Rockwell gave her a form—riveting gun on her lap, Mein Kampf beneath her boot—on the cover of the Saturday Evening Post.  J. Howard Miller’s recruiting poster, declaring “We Can Do It!,” seared her into our collective memory. After eight decades, Rosie the Riveter remains a powerful icon. Beyond the propaganda, however, are the stories of hundreds of thousands of New Jersey women.

The December 1941 attack on Pearl Harbor spurred many women to action. Alice Jennings Archibald of New Brunswick recalls, “Everyone wanted to do his or her bit at the time.  If you weren’t going into the service, you wanted to do something, so, I got a job at the [Raritan] Arsenal.” 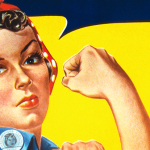 The opportunity to earn higher wages was also appealing. Mary Anna Schneider of National Park described her experience as a solderer at RCA Victor in Camden, reflecting that she “was making thirty-five dollars a week—that was a lot different than twelve at the laundry.” Harriet Buono of Franklin cited both money and patriotism as her motivation to become an explosives operator at Picatinny Arsenal. Once she met her future husband, then a US Army soldier, her work also became more personal.

Women broke new ground by entering previously all-male occupations. Bertha Cady was a tubing machine operator at Manhattan Rubber in Passaic. “It was really muscle work,” she recalled, “and I really had muscles when I finished working there. In fact, the name was very good for everybody—Big Bertha, big muscles, and all that.” “Working in that black powder was terrible dirty,” adds Buono, “and of course you have people that resent you being there and would rather have somebody else beside them…It was a man’s domain.”

The realities of the working world came as a shock to many. Edith Varga, from Jefferson Township, became a gauge draftsperson at Picatinny Arsenal. “Initially, we were handled by a military officer. This man demanded that we say ‘sir,’ and I had never said ‘sir’ to anyone in my entire life…The medical exam, taking my blood was like an experiment to find a vein. . .That was sort of a rude way to start your first job.” The job also exposed Varga to a larger world. “Then, they brought in people from, I don’t know, Haiti, I believe. . .They brought people in from every backwoods farm…In my town of Wharton, I don’t know if there was one black person.  They had a lot of Hungarians. At that time, I didn’t know I would marry a Hungarian and go to see Hungary, too.  So life was different.”

Working in heavy industry could also be dangerous. Helene Nicholas of Landing went into munitions manufacturing at Hercules in 1942. “Once in the press, we had a fire and we women scattered up and out. And after it was over, the fire, they put it out, and our supervisor said, ‘Now, where were you ladies running to?!’…He said, ‘You were running right in the path of danger, the worst place to run.’ You know, instead of running out through the gate, we were going further into the building where the powder was being manufactured.”

A different threat—sexual harassment in the workplace—also loomed. “Any men that were there . . .” Buono recalls, “they would come on to you. You know, this is life. A man is a man, and they’re gonna be men…They would keep [on], and I’d say, ‘Listen, I told you before, get lost!’…One of the things I told ‘em, ‘I’ll tell your wife!’”

Women with families also had to juggle the roles of workers, wives, and mothers. “Well, I worked midnights,” Cady remembers. “I worked from eleven to seven, so I took care of them all day long. And then come home in the morning, they were getting up, so they never knew their mother was out. That’s the way we lived.”

Today, these former war workers look back on their service as transformative. “I often think that’s what started taking the women out of the kitchen,” recalls Schneider. “They got a taste of making money, you know.” Buono notes, “It freed women up to be what they wanted to be, not what they are perceived to be. We used to be just mothers and homemakers. Now, you can be anything in this world that you want to be.”

Shaun Illingworth directs the Rutgers Oral History Archives (ROHA) at Rutgers University in New Brunswick. Harriet Buono, Bertha Cady, Edith Varga and Helene Nicholas were interviewed by Ann Kelsey for the “Rosie the Riveter: Morris County Women During World War II” project at The Learning Resource Center at the County College of Morris in 2005. Both programs were assisted by grants from the New Jersey Historical Commission, a division of the Department of State.  Visit the ROHA website at http://oralhistory.rutgers.edu to read hundreds of interviews with New Jersey’s eyewitnesses to history.