New Jersey in TV and Film

When the colony of New Jersey was founded in 1664, it really didn’t contribute much to the film and TV industries – but in the 17th century, to be fair, neither did anyone else. And though New Jersey didn’t make any efforts in those areas for the next 225 years, when it finally did, it was in the same spirit as those original settlers: as a pioneer. 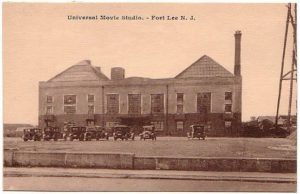 Fort Lee Studios in NJ, where the modern film industry was born. Image courtesy of the Fort Lee Film Commission.

As part of the state of New Jersey’s honoring of its 350th anniversary as an American colony, I was asked to assemble a panel of film and TV critics and historians, who in turn would assemble a subjective yet representative list of some of the most significant film and television productions to either emanate from, be partly set in, or tell about some person or event from New Jersey. Assembling the panel was an easy call. Each of them either lives or lived in the tri-state area, and is impressively knowledgeable about film and/or television. Carrie Rickey, for many decades, has served readers of the Philadelphia Inquirer as film critic. Mark Dawidziak, current TV critic and former film and media critic for the Cleveland Plain Dealer, grew up in Long Island. Jon Mason is a filmmaker and film professor who, like me, teaches at New Jersey’s Rowan University. And I’ve lived in Cherry Hill since 1984, and in addition to editing the website TV Worth Watching, serve as TV critic and guest host for NPR’s Fresh Air with Terry Gross, emanating from Philadelphia. The four of us, collectively, have more than a century’s worth of experience and perspective. Each contributed some titles, or pointed in some directions, that others initially had forgotten – and once we agreed about the criteria for inclusion, it was smooth sailing all the way.

The big question going in was this: Would we limit our selections to the very best films and TV shows to come out of New Jersey over the years? Or would we also include items of cultural significance, regardless of their popularity or notoriety? We decided to do both, which is why, on the same list, HBO’s superb TV series The Sopranos can exist alongside MTV’s mind-numbingly abrasive Jersey Shore. Looking at the list in its totality, New Jersey has a lot about which to boast. In Thomas Edison, who founded the United States’ first movie studio when he built the so-called “Black Maria” in 1893, New Jersey gets to co-stake his claim as our country’s birthplace of cinema.

In TV, the characters, settings and sensibilities of The Sopranos not only are pure Jersey, but the series has been lauded by the Writers Guild of America as the best-written TV series of all time. And when film and TV have touched either entirely or only partly upon New Jersey soil or settings or sensibilities, the results often have been indelible, from Marlon Brando’s agonized ex-boxer in 1954’s On the Waterfront to Mickey Rourke’s agonized faded showman in 2008’s The Wrestler. Even the caustic reality-TV cesspool that is The Real Housewives of New Jersey, like Jersey Shore, can inspire worthwhile art, however improbable that sounds. For proof, though it’s not on this list, please refer to Season 14, episode nine of Comedy Central’s South Park, and witness the superb satire of the episode entitled It’s a Jersey Thing, in which the influence of all things Jersey spreads nationwide, as far as Colorado’s own remote South Park. It’s a long way from Monkeyshines, No. 1 and Monkeyshines, No. 2, the first cinematic experiments Edison filmed around 1889 and 1890. But it’s all part of a continuous stream of movie and TV history – a history that flows quite naturally, and consistently, though the Jersey state.

David Bianculli is a guest host and TV critic on NPR’s Fresh Air with Terry Gross. A contributor to the show since its inception, he has been a TV critic since 1975. An author of three books on the history of television, he is also an associate professor of TV and film at Rowan University in New Jersey, and the founder and editor of the online magazine, TVWorthWatching.com.