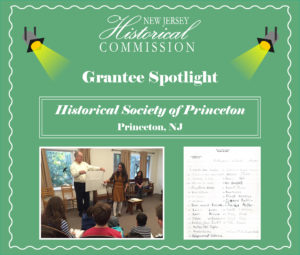 This week we spotlight – The Historical Society of Princeton!

The NJHC’s General Operating Support (GOS) grant funding enables the Historical Society of Princeton to retain a paid professional staff of historians. This support allowed HSP to provide nearly fifty hours of staff time, free of charge, to the Princeton Public Schools preparing a new third grade local history curriculum. This curriculum replaces one that HSP wrote in 1985 and significantly expands the interpretation of women, people of color and relevant moments over the town’s full history. Built entirely around over 100 primary sources, the curriculum will enhance the classroom history education of over 200 third graders each year by teaching basic primary source analysis skills and introducing concepts of change over time. In response to recent racist incidents at Princeton High School, the district superintendent has lauded this curriculum rewrite as one of the ways its history curriculum combats intolerance. Tim Charleston, PPS’s Supervisor of Social Studies and Global Education, later emphasized how “this would not have become a reality without [HSP’s] effort, help, and professionalism.” HSP also plans to pilot these primary source packets in Princeton’s independent schools. This co-curricular support aims to build exciting, skills-based history classrooms that enhance critical thinking and broaden students’ understanding of the practice of history. HSP believes museums play an increasingly crucial role in the future of K-12 history education by deepening historical themes with local perspectives, providing opportunities for primary source engagement, and offering memorable experiential education programs. GOS support from the NJHC has allowed HSP to begin changing classroom history education in central New Jersey. 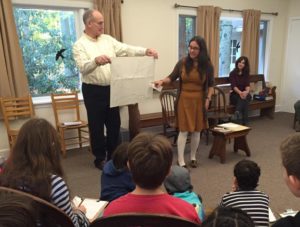 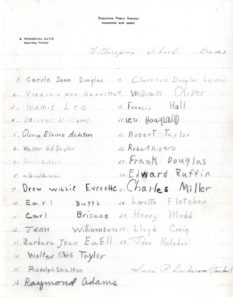 Photo Caption: An example of one of the sources included in the new third grade curriculum – a class roster from Princeton’s segregated African-American elementary school. 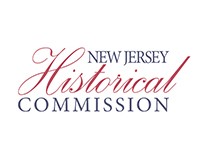