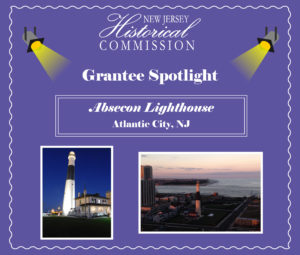 To mark the 50th anniversary of the New Jersey Historical Commission (NJHC) and emphasize the significant work of history organizations and programs across the state, we asked our FY 2017 and FY 2018 grant recipients to submit a short narrative and photos describing the impact of NJHC funding. Each week until the end of our fiscal year in June, we will post a spotlight featuring the responses of our grant recipients. Whether NJHC support contributed to general operating, a brand new exhibit, an engaging education program or the restoration of a historic object, it’s truly amazing to see what New Jersey’s history organizations, libraries, and individuals have to offer. 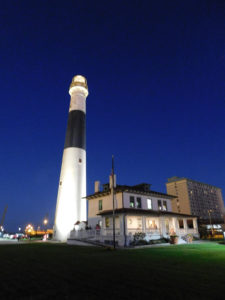 Thanks to the NJHC, New Jersey’s tallest lighthouse remains a beautiful icon in the Inlet Section of Atlantic City, now known as the Lighthouse District.  Absecon Lighthouse is just one of a handful of lighthouses that still has its original first-order Fresnel Lens still in place at the top.  When lit for navigation from 1857 through 1933, it could be seen for 19.5 nautical miles out to sea.  Why not further if it’s so strong?  Well, that’s when the earth begins its curve.  Now open year-round to visitors since its restoration in 1999, Absecon Lighthouse hosts many events and educational programs throughout the year, as well as an annual art contest for Atlantic City school children.  The NJHC grants funding each year to assist with operational expenses, and the light shines because of this generosity. 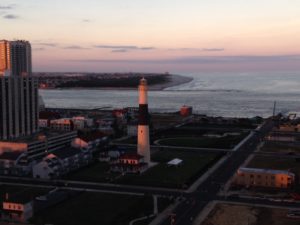 Thanks to the New Jersey Historical Commission, the country’s third tallest masonry lighthouse, Absecon Light, is open and operational for visitors from around the globe.  This photo shows the lighthouse along the “graveyard” inlet, known by that term to local sailors who braved the local waters, and some who lost their lives trying to.  Absecon Lighthouse is located on the southeast tip of Absecon Island, which is home to Atlantic City, Ventnor, Margate and Longport.  The word Absecon comes from a Native American Lenne Lanape word “absegami,” which means little running water.  The Lenape tribe would spend summers hunting, fishing, and camping on the island. Funding from the NJHC enables this magnificent light to be open year-round to educate the public of its rich history by providing grant money for operational support.  The organization’s Facebook address is AbseconLight, Twitter address is AbseconLight, and Instagram address is Absecon_Lighthouse.  Call 609-449-1360 or visit on the web at AbseconLighthouse.org.