Memories of Frank Sinatra: How Can You Not Like Jersey Best? 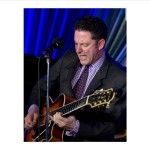 As I write this piece I am sitting in a hotel in Taipei at 7:45 on the morning of August 23, 2014. 21 years earlier I was waking up in Allendale, New Jersey and readying myself to open for Frank Sinatra at the Garden State Arts Center that evening. 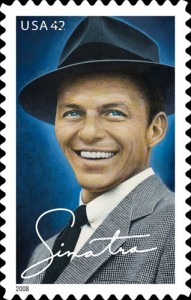 I had already done a European leg of this tour with Sinatra. We played six cities in Germany where I met The Chairman of The Board just once, in Berlin. He looked me over after shaking my hand and said to me, “Eat something, you look bad!” That tour was very successful, which led to my being asked to continue for a series of dates in Atlanta, Aurora, Illinois, Saratoga, and Holmdel, closing with four nights in Atlantic City at the Sands. This gig in Holmdel would be a bit different than the other ones. I had asked my father, Bucky Pizzarelli, jazz guitarist extraordinaire, to play rhythm guitar for my opening set.

The drive down the Parkway was fun because every toll booth had a sign promoting that evening’s concert with Sinatra and in small letters mentioning me as the opening act. That sign hangs in my son’s room even today.

The sound check went wonderfully and all that was left to do was wait for the gig . . . and Sinatra. We always liked to be around when he showed up. It was a magical experience watching him enter any building. The promoter asked him to take some pictures with people and he said, “Take a lot of pictures,” which was a code for “Because I’m not coming back!” I would find out later that was an expression he often liked to jokingly use.

Just before I was about to go on, I told my quartet that we would add a duet with my father to our set. I also said we wouldn’t do my signature song, “I Like Jersey Best,” because I did not want to show up Sinatra. I wanted to get on and off without fanfare. But then I got a message from an usher that said, “Brendan Byrne is in the audience.” I knew he liked Jersey Best and how was I to refuse a former governor?

Well, the set went swimmingly, duet and Jersey Best included, and even Frank Jr. mentioned how much he enjoyed our duet.

Bucky and I watched Sinatra from the wings. Aside from how great he sounded, Bucky couldn’t believe how Sinatra would take a drag on a cigarette during “One For My Baby,” sing a line, and THEN blow out the smoke! Crazy!

At the end of the concert, instead of going off via stage right where his people were, Sinatra walked off to the left of the stage where Bucky and I were.

We backed up to give him some room and ended up between the curtain and the back stage wall. Sinatra headed right for us.

He walked up to Bucky and said, “Thanks for helping us out tonight,” while shaking his hand. He was about to shake my hand when he noticed a tall blonde who had suddenly materialized next to me. He passed me right by to say hello to her. I watched him straighten up, his beautiful blue eyes clear and about 30 years come off of his back. He politely shook her hand and said good evening and thanked her for coming to the concert. His gaze was unlike any one I had ever seen. At that instant I realized the magic of those blue eyes and was in awe. He said a final good night, and left through a door right next to all of us. It was an amazing moment.

The chairman of the board was everything I had ever thought.

John Pizzarelli is a jazz guitarist, singer, songwriter, and bandleader who has established himself as one of the prime interpreters of the Great American Songbook. He received the 2009 Ella Fitzgerald Award from the Montreal International Jazz Festival, joining a select group of past winners including Aretha Franklin, Tony Bennett and Harry Connick, Jr. Pizzarelli’s latest album, Double Exposure, is a collection of tunes by some of the great pop songwriters of his own generation that are framed squarely within traditional jazz arrangements. John Pizzarelli grew up in Saddle River, New Jersey.