Editor’s Note: “In the summer of 1783, the final peace to end the War for Independence was being negotiated in Paris. George Washington had taken up residence in Rockingham, near Princeton where the Continental Congress was meeting. One of his visitors was Thomas Paine, author of the famous pamphlet Common Sense. Paine and some American officers entered into a polite argument about the nearby Millstone River, which was known to catch fire on occasion. Paine contended that there had to be something he called “inflammable air” near the river. The officers were skeptical. So Paine, Washington, and a group of soldiers boarded rowboats and stirred up the muck at the river’s bottom. As bubbles began to rise to the surface, Paine and Washington leaned over the side of the boat holding burning paper. The future President’s paper ignited the gas which had been released from the bottom.”

This note reflects on your stay at the Berrien Farm, Rockingham, Rocky Hill, at the close of the Revolutionary War. This past November 5th marks the 231st anniversary of your discovery of the gaseous nature of the inflammable material responsible for mysterious flames in swamps. Your experiment on the Millstone River was a flash of inspiration from magical mud which heralded American science and the study of microbiology. 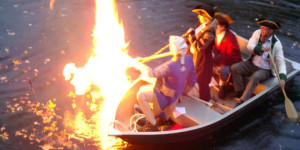 Re-enactment of the Washington-Paine experiment on the Millstone River on Nov. 5th, 2008 (the 225th anniversary of the event). Courtesy of Robert H. Barth.

Sirs, we note your considerable contributions to science. Mr. Paine’s The Age of Reason challenged the institutional status of religion and opened new pathways to the study of science. Your considerations of the origin of yellow jack were perspicacious. Only in 1900 was it realized the missing component was the musketoe as a vector. President Washington, Sir, you have demonstrated your scientific outlook through support of diverse war efforts: invisible ink for secret dispatches; a submarine, the Turtle; and detonating floating mines to destroy enemy shipping (“Battle of the Kegs”). Your use of the highly controversial “variolation” (vaccination) to prevent smallpox running amok in the Revolutionary Army was dramatic. Variolation based on the use of human vaccinia, though giving protection also yields a few smallpox cases. Your mandatory “variolation” restricted to new recruits caused only a few dispersed cases, thus preventing the whole army from becoming debilitated while still giving protection. Inspirational! An additional thought is with regard to agricultural interests. One of your ideas was to enhance soil fertility through the development of composts and you suggested one component to be river mud. This comment on mud returns us to the focus of our communication and Rocky Hill.

Of special interest is our recollection that while the Continental Congress in Princeton awaited the transatlantic arrival of the Treaty of Paris (signed September 3, 1783 – arrived October 31st), at Rockingham there was rejoicing over the end of hostilities and discussion regarding what would come next. The latter included ideas regarding the origin of the mysterious marsh blue flame, Will-o’-the-Wisp, which lured unsuspecting travelers to a boggy death. Your aides-de-camp, Colonels Humphreys and Cobb, believed it due to a floating bituminous substance, while you, Washington and Paine, argued the origin was a flammable gas. In your experiment on November 5th, from a scow in the Millstone River, Mr. Paine wrote that flaming torches were held above the river surface while soldiers probed the mud:

“When the mud at the bottom was disturbed by poles, the air bubbles rose fast, and I saw the fire take from General Washington’s light and descend from thence to the surface of the water…This was demonstrative evidence that what was called setting the river on fire was setting on fire the inflammable air that rose from the mud.”

You demonstrated a flammable gas rather than a bituminous floating substance was the basis for the Will-o’-the-Wisp. Although work on this gas had been performed by Alessandro Volta, Lake Como, Italy in November 1776, during the war you did not read the European scientific literature. Your “Flammable Gas Experiment” was independent and since it occurred just 63 days after the signing of the Treaty of Paris, we consider this the First American Scientific Experiment of our newly recognized United States of America. Congratulations!

The gas is now familiar as methane. The experiment initiated the understanding of the complex microbial process, methanogenesis. Your inquisitive nature was a positive omen for future presidents’ support of Science.