Learning from the Public About Public History

Thirty years ago, Ann and Thor Karlsson gave me a lesson in the meaning of the term “public history,” something about which I thought I knew a great deal. 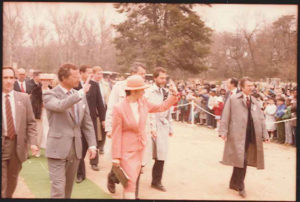 The Swedish King and Queen wave to a crowd in New Jersey as they arrive to celebrate the 350th anniversary of New Sweden. Courtesy of the NJ State Archives, Department of State.

The New Jersey Historical Commission was and remains by definition a public history agency. It is funded by the New Jersey taxpayers and its mandate is to provide education about New Jersey’s history for anyone who wants it. In the ‘80s, we were busy. We were finishing a project to publish the papers of the state’s first governor, William Livingston, and we were working with the National Park Service, Rutgers University, and the Smithsonian Institution to begin editing and publishing Thomas Edison’s papers (a project that’s still going on). We made films with New Jersey Network (NJN) and produced small books about big topics, like New Jersey folklife, African-American history, and the U.S. Constitution, in addition to biographies of important people like George L. Record, Mary Philbrook, and Ezra Mundy Hunt. We worked with the State Museum and the State Arts Council to present an exhibition about the history and culture of New Jersey’s Pinelands. We did an annual history conference for the general public, programs for teachers, a series that presented new research, and a continuing seminar about the history of science in New Jersey. We were planning how to commemorate the bicentennial of the United States Constitution later in the decade. The one thing we were not doing was making a plan to commemorate the 350th anniversary of New Sweden.

Of what? Sweden’s short-lived colony in the lower Delaware Valley, 1638-55, which produced an enduring Swedish- and Finnish-American population in Delaware, New Jersey, and Pennsylvania (New Sweden was as ethnically Finnish as Swedish), and introduced a number of important material culture features to North America, like the log cabin, the worm fence, and the sauna. The colony also retains a reputation for peaceful relations with its Indian neighbors. To be honest, in 1985 I knew very little about New Sweden. Or maybe I knew nothing at all. Until I met Ann and Thor. Ann was a transplanted Californian and a Monmouth County realtor, and Thor (A. Thorsten) was a transplanted Swede, an engineer, and an international businessman. They wanted to stimulate a big commemoration of New Sweden. And they did.

What they showed skeptical me is that public history doesn’t have to originate with an agency like the NJHC. It can come directly from the public! If that seems like it should have been obvious to me, it wasn’t. Lots of historians still think of New Sweden as an obscure and unimportant sidebar to the early history of what became the United States. But that Swedish- and Finnish-American population in New Jersey disagreed. Swedish- and Finnish-Americans energized and sustained the commemoration in 1988 and involved the governments of three states, the humanities organizations of two, and the government of Sweden. New Jersey appointed a commemorative commission and the legislature appropriated money for it. The commemoration had the warm support of the governor’s office and, especially, Secretary of State Jane Burgio. Sweden’s king and queen visited and took part in the festivities.

We all together, New Jersey government employees and Delaware Valley Swedish- and Finnish-Americans, produced a multiday conference and a subsequent book, as well as a major exhibition at the State Museum that later traveled to Bishop Hill in Illinois, the site of one of the first big 19th-century Swedish migrations to the U.S. It produced a traveling program by the NJHC and the State Museum that visited Swedish-and Finnish-American cultural groups in old New Sweden as well as New York and Connecticut. It produced local exhibitions and teachers’ programs and an enduring friendship between Swedish- and Finnish-Americans, the Swedish government, and Delaware Valley, especially New Jersey, Native Americans.

Thor Karlsson died soon after the New Sweden commemoration he did so much to bring about. Ann Karlsson (Lefever) died this past winter. They were much loved and are sorely missed.

Want to know more about New Sweden? A good introduction is Lorraine E. Williams, The New Sweden Colony (Trenton: New Jersey State Museum, 1988), the catalogue of the exhibition noted above. A recent treatment is Mark L. Thompson’s The Contest for the Delaware Valley: Allegiance, Identity, and Empire in the Seventeenth Century (Baton Rouge: Louisiana State University Press, 2013). The classic history of New Sweden (in many ways still unsurpassed) is Amandus Johnson’s The Swedish Settlements on the Delaware, 1638-1664, 2 vols. (Philadelphia: University of Pennsylvania and Swedish Colonial Society, 1911). It is available in many libraries and can be purchased in various editions online from Amazon.com and Alibris.com and other used and rare book dealers. Anyone who would like to have a more detailed bibliography need only ask for it by email: acrelius@optonline.net.