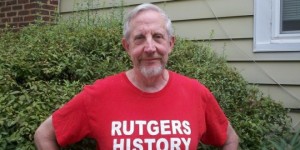 “Dear New Jersey, when people call you ‘The Armpit of America’’ take it as a compliment. Sincerely, Dove.”This was the text of a 2014 billboard campaign touting a brand of deodorant. A lot of Jerseyans complained that the ad copy implied that residents of the state are lacking in personal hygiene, and the firm withdrew its billboards. Here’s another joke that depicts Jerseyans as crude and vulgar: Question: What is the official motto of New Jersey? Answer: I don’t have to show you any f$#$@%^&* motto! 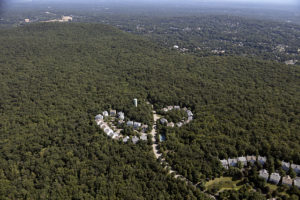 A beautiful site in our state: High Mountain Reserve Park in Wayne, New Jersey. Courtesy of Library of Congress, LC-DIG-highsm-45268.

New Jerseyans are pretty accustomed to put-downs like this, and Jersey Jokes are a well-established genre of American humor. How far back does this tradition go? Abraham Lincoln, the greatest of our presidents, is reported to have told a Jersey joke about a shipwrecked sailor who would rather float helplessly with the tides than be hauled up to safety on the Jersey shore. In 1872, the magazine Picturesque America remarked that from its beginning, New Jersey “has been the butt of sarcasm and wit of those who live outside her borders.”

Moving ahead to the 21st century, in 2002 a professor of sociology in the United Kingdom sent out 40,000 jokes on the Internet, and asked people around the world to vote on the one they liked the best. The professor received two million votes. Here is the joke that got the most votes and is therefore the official funniest joke in the world:

A couple of New Jersey hunters are out in the woods when one of them falls to the ground. He doesn’t seem to be breathing, his eyes are rolled back in his head. The other guy whips out his cell phone and calls the emergency services. He gasps to the operator: “My friend is dead! What can I do?” The operator, in a calm soothing voice, says: “Just take it easy. I can help. First, let’s make sure he’s dead.” There is a silence, then a shot is heard. The guy’s voice comes back on the line. He says: “OK, now what?”

When the joke begins by saying that Jerseyans are involved, it flashes the message that something stupid is about to happen. 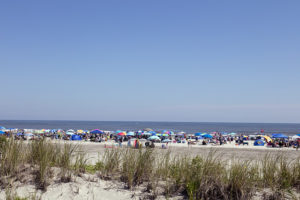 You could come up with a lot of theories about why New Jersey gets dissed from all over. Part of it surely comes from the colonial era, when New Jersey became a British colony. Other colonies boasted of their wealthy elites and big cities, claimed to be religious utopias, and had ambitions to expand their territories. But not humble little New Jersey. In fact, New Jerseyans came to take a perverse sort of pride in having a rough, blue collar reputation. Consider Bruce Springsteen, who said that Jerseyans “bear the coolness of the forever uncool. . . .This is not our curse. It is our blessing.” Two Rutgers professors identified a self-mocking “so bad, it’s good” attitude that Jerseyans have about their state.

But look. SO WHAT if some people chuckle at our expense. We live in a state with parks and historic sites, gracious beach communities, and a tradition of tolerance and inventiveness. And we keep our armpits clean too. This year marks the 350th anniversary of New Jersey; let’s pat ourselves on the back for creating a great place to live. And that’s no joke!

Marc Mappen, Ph.D., has been described by the New York Times as “the eminent historian of New Jersey.” He was formerly a dean at Rutgers and the director of the New Jersey Historical Commission; he has six books to his credit.