Interpreting the Life of Molly Pitcher 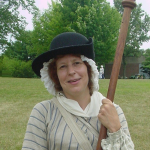 June 28, 1778, Monmouth Courthouse, New Jersey.  A blazing sun beat down upon the heads of soldiers of the American and British armies.  Stemming an almost disastrous retreat of the forces under General Charles Lee, General George Washington counter-attacked with a barrage of artillery from a ridge across the farm of Henry Perrine.  In the midst of the melee, Joseph Plumb Martin, a Connecticut soldier posted in the shadow of the artillery position, observed something unusual and worthy of note – a plucky she-artillerist!

Molly Pitcher on the battlefield. Courtesy of Library of Congress, LC-USZ62-44892.

“One little incident happened during the heat of the cannonade, which I was eyewitness to, and which I think would be unpardonable to mention. A woman whose husband belonged to the artillery and who was then attached to a piece in the engagement, attended with her husband at the piece the whole time. When in the act of reaching a cartridge and having one of her feet as far before the other as she could step, a cannon shot from the enemy passed directly between her legs without doing any other damage than carrying away all the lower part of her petticoat. Looking at it with apparent unconcern, she observed that it was lucky it did not pass a little higher, for in that case it might have carried away something else, and continued her occupation.”

Martin’s account was first published – anonymously – in 1830.  In subsequent decades, many second-hand accounts of a Monmouth heroine would follow, embellishing the facts and frequently confusing this woman with yet another female artillerist, Margaret Corbin, whose husband was killed when both served a piece at the siege of Fort Washington in 1776.  Both of these female veterans were dubbed “Molly Pitcher” and the myths and legends surrounding them were widespread by the middle of the 19th century.

Who, then, was the fierce lass of the Battle of Monmouth Courthouse?

Her name is Mary Hays, later Mary Hays McCauley.  Her first husband, Irish-born William Hays, enlisted in the Pennsylvania-based artillery regiment of Col. Thomas Proctor on May 10, 1777.  Mary, or Molly, as she was also known, joined her husband on campaign, voluntarily serving with the Continental Army as a “camp follower” (a perfectly respectable term for those of either gender who provided support services to the military).

Following the War, Mr. and Mrs. Hays settled in Carlisle, Pennsylvania, where William died in 1787.  After five years of widowhood, Mary Hays married second husband John McCauley.  Throughout her life, she supported herself and her family through a variety of domestic labors.  She scrubbed public buildings, looked after neighbor’s children, and cared for invalids.  Neighbors remembered her fondly and one, Mrs. Susan Heckendorn, remarked that Molly used to entertain the local youth with her stories, claiming, “You girls should have been with me at the Battle of Monmouth and learned how to load a cannon.”  Despite a life of hard work, her finances dwindled.  In 1822, Mary Hays McCauley petitioned the Pennsylvania Legislature for a widow’s pension.  Imagine her surprise and satisfaction when instead, they awarded her an annuity based on her own service in the Revolution.  The index to the legislative act that granted her pension refers to her as a “Revolutionary Heroine.”

Since 2001, I have had the pleasure of keeping the memory of Molly’s heroism alive through my interpretive storytelling program “Over Here Molly Pitcher: Stories of a Woman of the Army in the American Revolution.”  It has been a challenge as the interpreter of Mary Hays McCauley’s story to sift the facts from the many myths in the retellings of her adventure.  I have sought to create a plausible narrative of how she transitioned from camp follower to combatant, what role she played on the battlefield, and where her heroic act occurred.

Driving my narrative is another central question: What could have motivated her to step outside of the traditional role of a woman of the army?  We will never know for certain, but I imagine that she possessed as burning a desire for independence as any patriot – and that she was willing to do whatever was necessary to further that goal.  If that meant assuming a man’s duties in a unit that was perennially shy of active troops, so be it!

In addition to Molly’s personal story, it is my goal to interpret the more general topic of the daily life of women camp followers of the Continental Army, the complexity and teamwork necessary to fire a cannon in battle, and to relate that she was fulfilling the position of assistant bombardier rather than the more frequently imagined job of ramming and swabbing.  When I have an opportunity to conduct a follow-up discussion at the close of the program, for which I shed the persona of Molly and speak as myself, I feel it is also important to discuss the economic difficulties that Revolutionary War veterans and their families encountered throughout their lives once the conflict was over and how and why need-based pensions were introduced as many veterans’ abilities to earn a livelihood declined.

As “Molly” often reminds her audiences, nowadays we take for granted that our government is run by the people – and not a monarch.  From time to time, we must reflect on their “fatigues and sufferings.”  We should never take for granted that a generation fought and sacrificed that it should be so.

Stacy F. Roth is a freelance historical interpreter whose company, History on the Hoof, is based in Burlington, NJ.  She is a popular presenter on the roster of the New Jersey Council for the Humanities’ Horizons Speakers Bureau and is the author of Past Into Present: Effective Techniques for First-Person Historical Interpretation (University of North Carolina Press, 1998).