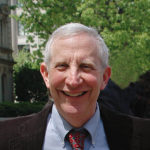 Marc Mappen, former executive director of the New Jersey Historical Commission, died on Sunday, January 6, 2019 having spent most of his life, and a great deal of his energy, working on and promoting the history of the state. He was the author of numerous articles and books, a frequent speaker who delighted in telling humorous offbeat stories about people and places, a public scholar and servant, and good friend to a great many people. Born in Massachusetts, he moved to New Jersey when he was thirteen, returned for a 1967 BA from Boston University, but came back for graduate school and never left.

Mappen studied at Rutgers University – New Brunswick with noted early American History Professor Phillip Greven. He received an MA in 1968 and a Ph.D. in 1976 writing a dissertation entitled “Anatomy of a Schism: Religious Dissent in a New England Community, 1705-1765.” Even before he finished his graduate program, he worked in the Rutgers Administration serving as a dean first on the Newark Campus, and then in New Brunswick.  From 1994-1997 he served as vice chair of the Task Force on New Jersey History, a significant state history initiative launched during the Whitman administration. Recommendations from the Task Force eventually led to passage of legislation designating a portion of revenue from the hotel/motel tax as a consistent source of funding for history grants, including general operating support.

In 2000 he became the third executive director of the New Jersey Historical Commission, New Jersey Department of State, where he served until his retirement in 2010. Long before assuming this position he had turned a passion for New Jersey history into a role in promoting the state and its long rich diverse history. During his tenure the Commission launched a major new grant program while continuing to present annual state history conferences and produce New Jersey history programs and publications in print, on film, and on radio.

Perhaps residence in Massachusetts, and the topic of his graduate work, gave him an abiding interest in witches, and then gangsters (topics of two of his books: Witches and Historians: Interpretations of Salem (1980); and Prohibition Gangsters: A Generation of Bad Men (2013). There is no doubt that his curiosity and impish sense of humor led him to search for examples of people and events in New Jersey that were overlooked, unusual, dramatic, sometimes just fun—or funny. These appeared first as pieces in the Sunday New Jersey section of the New York Times from 1988 to 1995, and then in two works published by Rutgers University Press – Jerseyana: The Underside of New Jersey History (1992), and then There’s More to New Jersey Than the Sopranos (2009). The former included pieces on bandits, murderers, the KKK, and Nazis in New Jersey. The latter featured Molly Pitcher, Annie Oakley, Billy Sunday, Applejack, and a pigeon that carried messages in World War I. Looking at the Encyclopedia of New York City he decided that New Jersey needed a similar comprehensive study, ultimately convincing Rutgers University Press Director Marlie Wasserman to take on the project, and Professor Maxine N. Lurie of Seton Hall University to be his co-editor. In 2004, after nine years of funding-raising, editing, and writing, the weighty (literally) Encyclopedia of New Jersey appeared.

Marc Mappen received several awards from the New Jersey Historical Commission – Awards of Recognition in 1994 and 1997, and the Richard Hughes Award for life time achievement in 2012. In addition to these honors, he received the warm affection of Commission members, staff, and the wide public audience he served and delighted with his stories. 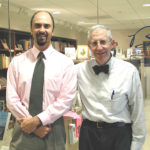 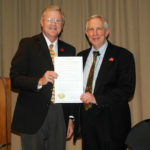 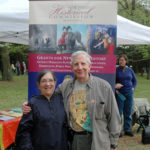 Marc with his wife, Ellen 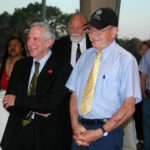 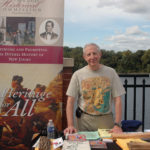 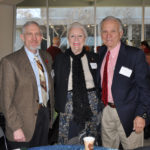 Marc with Annie and Joe Salvatore 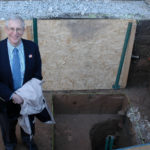 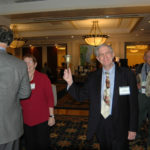 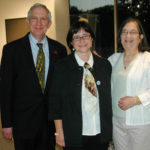 Marc with Sara Cureton and his wife, Ellen 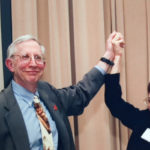 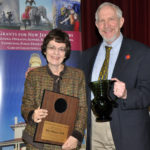