Explosion on the Waterfront 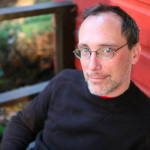 In my years working local history reference at the Jersey City Free Public Library, I have found the explosion at Black Tom to be among the most requested research subjects. In one way, the event was all too common; explosions and fires plagued Jersey City throughout its years as a port. As early as August of 1866, as the railroads’ post-war expansion along the Jersey City waterfront was gathering steam, powerful explosions caused by a fire on petroleum-laden ships wreaked massive damage, reported widely in the newspapers of the day. For the next century, such cataclysms were a regular occurrence, in greater and lesser degrees happening every few years. In 1911, an explosion of a cargo of dynamite on the Central Railroad pier at Communipaw just north of Black Tom, raised concerns over the handling of explosive cargoes. But the hand of foreign saboteurs, and the subsequent American entry into the “War to End All Wars,” sets Black Tom apart. 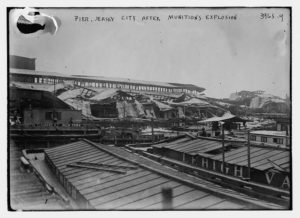 The pier at Black Tom after a munitions explosion, 1916. Courtesy of Library of Congress, LC-DIG-ggbain-22664.

Five years after the explosion at Communipaw, the nearby pier at Black Tom was destroyed in a blast several times more powerful – reports stated that the effects were felt as far away as Asbury Park. Shortly afterwards, suspicions were raised that this was more than just an extreme example of the all-too-familiar port fire, but rather a strike against the war supplies headed for the Allied effort in World War I. Though it would be many years before an official verdict was proclaimed and German reparations offered, for practical purposes it was soon known to be an act of war against the United States, and as such was one of the final factors in moving a reluctant and divided nation into active participation in the conflict.

The explosion and its aftermath are also significant as an early test of new Public Safety Director Frank Hague. Hague and members of his department had raised concerns with federal representatives over the safety of munitions held at the docks during transfer from rail to ship, only to be rebuffed in the face of the logistical needs of the war supply effort. When these concerns were so vividly borne out, the response of the fire and police departments Hague had been reforming burnished his reputation, as did the theatricality of his short-lived attempt to blockade arms shipments through Jersey City, the arrest of railroad officials, and public meetings on the creation of local laws that would call for stricter oversight than the Interstate Commerce Commission was providing.

Not long after, Hague would become Mayor, a position from which he wielded tremendous power throughout the state for the next 30 years. Well-publicized conflicts with the railroad companies and other levels of government, strict attention to law and order, and a skill for grand political spectacle – all evident in his response to Black Tom – would continue as hallmarks of his career.

Memories of Black Tom were surely evoked in May 1941, when a massive explosion and fire broke out not far from the site of the 1866 conflagration on docks loaded with supplies for Britain; port officials were quick to assert that this time there was no sabotage involved. Just as surely, those memories were the cause of the absolute secrecy around the full range of use of the Caven Point military pier constructed during the war not far from the Black Tom site. Though at the time the pier was said to be only used for troop deployment, it was revealed after the war that most of the arms for the war in Europe had also been shipped out via Jersey City. Operational secrecy and naval vigilance prevented the enemy from exploiting an opportunity for sabotage that could have outstripped Black Tom by several orders of magnitude.

Instead, Black Tom remained unique as a successful act of international sabotage – an act of war – until September 11, 2001. That terrible day, so much more devastating for the number of lives lost, brought renewed relevance to the earlier event that had receded into remote historical memory. The two events share significance as marking turning points in the history of our region and state, and for the world at large. Just as World War I signaled the end of what scholars have called the “long 19th century,” that more recent attack defined the start of the 21st century, bringing renewed awareness of the trauma of an attack on the home front, so unfamiliar throughout most of our nation’s history.

John Beekman, MLIS is Assistant Manager of The New Jersey Room of the Jersey City Free Public Library. Founded in the year of New Jersey’s Tercentenary, the New Jersey Room is one of NJ’s premier collections of state and local history, and will celebrate both its 50th Anniversary and the 350th Anniversary of New Jersey in an event on September 20. John is a Past President of the NJ Library Association’s History and Preservation Section and serves as a co-editor at H-New Jersey, a state history forum hosted by H-Net.