Echoes of the 1930s and the Workers’ Alliance Protests 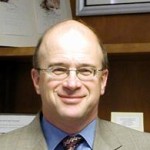 They were desperate and fearful times.  There had been other depressions in American history, but none before or since have rivaled the Great Depression that began with the Stock Market Crash of 1929.  Unemployment soared throughout New Jersey and the nation leaving over a quarter of the workforce unemployed.  Homelessness remained endemic and malnutrition rife.  In my oral history interviews as founding director (1994-1998) of the Rutgers Oral History Archives with those who came of age during the interwar years, I was struck with the degree to which the Depression shaped their identities.  Even for those who did not directly experience deprivation, few were unaware of the toll the Depression took on their friends, neighbors, and communities. 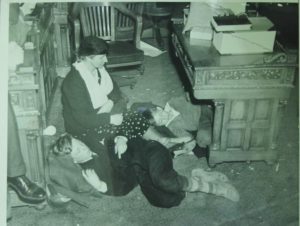 People participating in the 1936 State House Occupation in Trenton. Courtesy of Office of Legislative Services Library.

Living through the Great Recession of 2008 has given me a greater appreciation for how much we have learned from 1929.  On the eve of Franklin D. Roosevelt’s inauguration as president on March 4, 1933, the entire banking and financial system stood on the verge of complete collapse with banks closed throughout New Jersey and the nation.  One of the most dramatic accomplishments of the New Deal would be to bring the country back from the brink and stabilize the economy.  In the Great Recession, a number of large financial firms collapsed, but intervention by the federal government prevented the situation from escalating into the paralysis that gripped the country in early 1933.

The New Deal is correctly remembered as leading to the unprecedented expansion of the role of the federal government in daily life through programs such as the Social Security Act of 1935, the National Labor Relations Act, and the Fair Labor Standards Act.  But it also was a federal-state partnership with local and state governments contributing to the costs of infrastructure improvements and welfare programs.  Even with federal funds, New Jersey struggled to meet the needs of the unemployed and the destitute, especially after a highly unpopular sales tax briefly enacted in 1935 was repealed.  The lack of any broad-based income or sales tax encouraged the state legislature in April 1936 to take the politically expedient step of returning primary responsibility for administering and paying for relief to hard-pressed local governments.  After adjourning in order to face the primary voters in an election year, a small group of the unemployed took peaceful control of the State Assembly chamber in Trenton under the banner of the “Workers’ Alliance.”  Attracting growing numbers and national publicity, this leftist organization staged a mock legislative session passing a series of bills that included a progressive income tax, increased corporate taxes, and a minimum wage.

The immediate legacy of the Workers’ Alliance protests was ambiguous.  Governor Harold Hoffman did not evict the protesters by force and called the legislature back in session to further take up the issue of relief spending.  After nine days, the unemployed ended their sit-in and returned home even though the legislature made only superficial concessions to their demands.  But the end of the protests did not end the demands for change by many workers who gravitated to the newly-formed CIO.  Despite heavy opposition from Jersey City Mayor Frank Hague and other state leaders, this labor organization would meet with growing success in organizing industrial workers in the state.

Studying the Great Depression in New Jersey has provided me with a new appreciation for the intense ideological struggles that took place in the state and throughout the nation.  As a historian, I can see merit in many arguments made by both proponents of the New Deal and those who opposed it on both the right and far left.  While my sympathies are with the New Deal, especially those policies aimed at social justice, in hindsight it is quite clear that the conservative criticism of the National Recovery Administration, FDR’s effort to regulate the economy, was on target and this initiative was bound to fail even if the Supreme Court had not declared it unconstitutional.  Although history never repeats itself exactly in the same way, there are echoes of 1930s in the Occupy Wall Street movement, the rise of the Tea Party, and the continuing debates about the proper role of government in American society.

G. Kurt Piehler is Director of the Institute on World War II and the Human Experience at Florida State University. A Phi Beta Kappa graduate of Drew University, he holds a master’s degree and doctorate in history from Rutgers University.  Presently he is writing a book on the Religious Life of the American GI in World War II.