Breaking the Gridlock: The New Jersey Plan at the Constitutional Convention 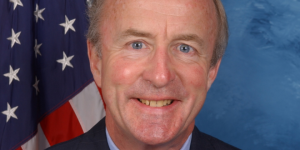 The debate over the fundamental structure of the United States Congress, established in Article I of the Constitution more than two centuries ago, is rarely engaged anymore outside of social studies classes and political science courses.

Recently, however, that debate has found a wider audience as a part of the conversation about gridlock in Washington.  Some have suggested that the basic structure of the Senate – where every state, no matter its population, has two votes – contributes to the problem by giving smaller states too much power.

This discussion prompted me to recall that the last debate on this issue, 227 years ago at the Constitutional Convention, was resolved in no small part because of what historians call the “New Jersey Plan,” which was introduced on June 15, 1787.

Although I majored in American History in college, and serve as a Member of Congress, that is not why the “New Jersey Plan” immediately came to my mind.  But I will get to that a little later. 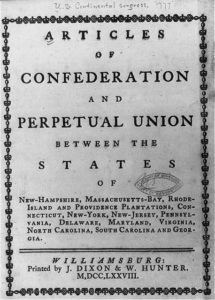 Articles of Confederation. Courtesy of Library of Congress, LC-USZ62-59464.

This structure was, however, the subject of intense debate at the Constitutional Convention held in Philadelphia in 1787.  The convention was called because the nation’s original governing document, the Articles of Confederation, simply was not working.

Under the Articles of Confederation, the national government was incredibly weak and ineffective.  The national government did not have a chief executive and the Congress consisted of just one house in which each state delegation, which varied in size, had just one vote.  This followed the precedent set by the composition of the Continental Congress.

The Constitutional Convention was called to amend the Articles, but it quickly instead became an effort to replace it.  James Madison, the man we today call the “Father of the Constitution,” drafted an entirely new Constitution, known as the Virginia Plan, after his home state.

Included in the Virginia Plan was the creation of a bicameral national legislature, just like we have today.  But under Madison’s plan, each house of the legislature would be based on proportional representation.  So the larger the state, the more representatives that state would have in each house of Congress.

It is not surprising that Virginia would propose such a plan.  It was, at the time, the largest of the thirteen states.  Virginia was home to about 750,000 people.  The population of New Jersey, on the other hand, was about 185,000.

Under the Virginia plan, therefore, Virginia would have had four times as many representatives in Congress than New Jersey.  Indeed, the Virginia Congressional delegation would have been about the same size of the delegations of Connecticut, Delaware, Georgia, New Hampshire, New Jersey, and Rhode Island combined.

This obviously did not sit well with smaller states.  After extended debate, with neither side giving ground, convention delegate William Paterson presented an alternate, the New Jersey Plan.  Paterson’s proposal would retain the existing structure of the Congress under the Articles of Confederation – one house, not two, with each state having one vote.

These two competing plans gridlocked the Convention.  The strong support the smaller states gave to the New Jersey Plan finally convinced the supporters of the Virginia Plan of the need to find middle ground.

So when I recently heard that the issue about the make-up of the Senate is being revisited by some, I was reminded of the days back in 1787 when New Jersey played an indispensable role in the creation of a new Congress.  And I also remembered that one of my ancestors played a part in ratifying the document that created the Congress in which I have the honor to represent the people I serve.