In preparation to write this entry, I began to think about when I first became aware of the work of Ben Shahn (1898-1969).  Surely, it was in college art history classes in the early 1980s.  So, I pulled out my notebooks from that time and scoured through them to see what youthful ideas I had of Mr. Shahn’s work.  To my surprise, there was no mention of Shahn or social realism.  Well, perhaps I missed that lecture, so I consulted my dog-eared copy of H.W. Janson’s History of Art (second edition, 1981).  No reference at all!  I did find a three-line reference to Shahn in H.H. Arnason’s Modern Art (second edition, 1983), but nothing in my notes indicates that the American social realists were ever discussed in that class.  Little mention of Shahn!  How is that possible?  How could such an important figure in American art be almost completely overlooked by two primary art history texts? 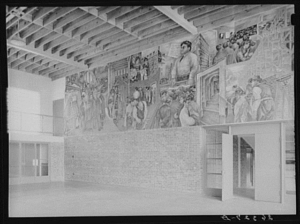 The answer lies, I believe, in the notion that Shahn was an illustrator and not a fine artist.  Of course, he was a successful graphic artist, but the totality of his œuvre transcends the purely illustrative.  His social realist art, as well as the work of his peers Dorothea Lange, Walker Evans, and Raphael and Moses Soyer, among others, is as important to American art as the work of the great muralists Diego Rivera, José Clemente Orozco, and David Alfaro Siqueiros was to Mexico.

Born in Kovno, Lithuania, Shahn moved with his family in 1906 to the United States where they settled in Williamsburg, Brooklyn.  As a young man, he studied lithography, and in the 1920s, he became interested in political and social issues.  In a 1968 interview, art historian Forrest Selvig asked Shahn if he had “always had a sense of injustice; or you’ve been aware of injustices.”  Would this come from any sort of family background?  Was your father very aware of this too?”  Shahn’s reply related the possible cause of his interest in social issues:

“My father was very aware…. My father was – this was while we were still in Russia – arrested.  My mother claims there was no reason for this; that they planted leaflets on him or something.  He was sentenced to Siberia.  But he escaped immediately.  Graft is so rife there.  And he got into Sweden.  And we didn’t see him for three years.  He went to South Africa.  Did very well there.  It was not too long after the Boer War and it was a booming country.  And then he came on here and we joined him.”1

Shahn’s early works includes posters and handbills for labor unions, political causes and candidates, as well as illustrations for books, magazines, album (record) covers, among other projects on which he worked.  However, it was the Sacco & Vanzetti case which profoundly impacted Shahn and became the image for which he may be best known.

Early in Shahn’s career, two Italian-born Americans, Nicola Sacco and Bartolomeo Vanzetti, attracted attention by their “radical” strike activities and their flight to Mexico in 1917 to avoid the draft.  In 1920, they were arrested and charged with the murder of a Massachusetts paymaster.  Although witnesses claimed that the two were miles away at the time, and there were other weaknesses in the case, Sacco and Vanzetti were found guilty and condemned to death.  Their lawyers charged that the court was prejudiced, but a stay of execution was denied and the two died on August 23, 1927.  The execution touched off an international cry of outrage.  Renowned writers such as H.G.Wells, Edna St.Vincent Millay, and Sinclair Lewis, in addition to the physicist Albert Einstein, protested that the pair had been executed not because they were guilty, but because of their ethnic origin, radical beliefs, and draft evasion.  In 1930, reflecting upon this tragedy, Shahn began a series of 23 paintings based on the trial.  Three serigraphs, produced in 1958 and related to a 1952 drawing, testify to Shahn’s ongoing interest in this issue.  In one version of the serigraphs, combining both his experience as a graphic artist with his painterly skill, Shahn included text based on a reporter’s transcription made during the trial.  The spelling, grammar, and the folk alphabet were combined to immortalize Vanzetti’s words.  One of these serigraphs is currently on view at the New Jersey State Museum.

In 1936, Alfred Kastner invited Ben Shahn to paint a mural on the wall of the Jersey Homesteads elementary school depicting the founding of that planned community.  Shahn and his wife, Bernarda Bryson, settled permanently in the small town outside Hightstown in 1939 and other artists followed.  Jersey Homesteads was renamed Roosevelt in November 1945 in honor of President Franklin Delano Roosevelt who had died earlier that year.  Ben Shahn lived in Roosevelt until his death in 1969.

Shahn became known for many other works that commented on the human condition and circumstance.  Important paintings include Handball, 1939 (Museum of Modern Art), The Clinic, 1944 (Georgia Museum of Art), and Beatitude, 1952 (Private Collection).  By the late 1940s, Shahn was one of a handful of American artists who were making a living entirely from painting.  In 1947, the Museum of Modern Art (New York) gave Ben Shahn his first retrospective exhibition, cementing his reputation as an important figure in American art.  Since that time, Shahn’s work has been the subject of innumerable exhibitions and publications throughout the world.

The New Jersey State Museum holds over 350 works by Ben Shahn, including paintings, drawings, posters, photographs, books, greeting cards, album covers, and more.  A small selection of these works are on view in the exhibition, “Artists of Roosevelt,” through May 25, 2014 at the New Jersey State Museum, and six additional works are included in the long-term exhibition, “American Perspectives: The Fine Art Collection.”

1. Transcript of Interview with Ben Shahn conducted by Forrest Selvig for the Archives of American Art on September 27, 1968 in Roosevelt, NJ.

Margaret O’Reilly is the Executive Director of the New Jersey State Museum, Trenton.  At the State Museum, she has organized over 85 exhibitions as Curator of Fine Arts including a complete re-installation of the Museum’s art collection – “American Perspectives: The Fine Art Collection.”  Ms. O’Reilly received her MA in painting from Kean University.  Her research and exhibition interests echo those found in her own creative output and include issues of chance, identity and mortality, among others, while the formal qualities of particular interest to her are density, repetition and serial structure.