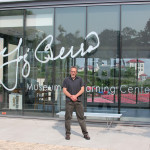 When I lived in Hoboken in the early 1980s, the times, as an old folksinger forewarned, they were a changin’.  Developers were streaming into the working-class, mile-square waterfront city and reviving brownstones and railroad flats in their wake.  For most of the 20th century, Hoboken’s gritty industriousness was reflected in its wave of immigrants, but in the era of Reagan, younger, scruffier types were moving in.  It was the early years of gentrification and the proximity to New York was priceless.

Hoboken was a newly discovered haven.  Or was it?  Actually, it was a wondrous pastoral destination over 150 years earlier when a bunch of bearded twenty-somethings, organized by a New York bank clerk named Alexander Cartwright, boarded the ferry from the bustling city to find their field of dreams. 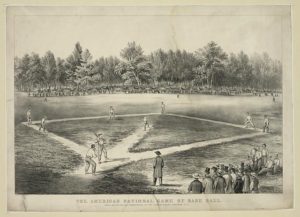 In autumn 1845, Cartwright’s pals, many of them volunteer firemen, formed what became known as the New York Knickerbocker Base Ball Club.  They descended on a tree-lined, grassy area called Elysian Fields and played the first recorded game of baseball, a leisurely stick-and-ball exercise whose rules and bylaws (some still in use today) were codified by Cartwright.

Elysian Fields would later be the site of the Maxwell House factory at the current intersection of 12th and Hudson.  But back in those pre-Civil War days, baseball took its first halting steps at the Fields toward becoming the sport that we know today.  Onlookers strolled by to watch the beginnings of a game that would transform America.  People were only too happy to see baseball’s popularity grow, a welcoming sign that the country was turning away from the bitterness that had divided the nation.

Whether Cartwright, the descendant of British sea captains, is the real Father of Baseball is still debated by historians; so is Hoboken’s claim as the so-called Birthplace of Baseball.  But it’s widely regarded that the very first organized baseball game, between the Knickerbockers and the New York Nine club from Manhattan, occurred in Hoboken on Sunday, June 19, 1846.  It wasn’t exactly a pitcher’s duel.  With Cartwright umpiring, the New York Nine won 23-1 in a game lasting four innings.  By this time, other amateur teams were forming and in a few short years the game was exploding in the New York area and elsewhere.  The game was professionalized in 1869 and has continually evolved over the last century and a half.

In Hoboken—a city that is currently a magnet for hipsters, trendy shops, and luxury condos—the role of baseball is hardly immortalized.  There’s a plaque on the corner of 11th and Washington on a strip of grass separating two lanes of traffic acknowledging, “The first match of baseball was played here on the Elysian Fields.”

But to me, Hoboken and baseball will forever be intertwined.  I remember watching Bruce Springsteen tape his 1985 video for “Glory Days” –one of the greatest baseball-themed songs ever—in Maxwell’s, a bar a few hundred feet from my Washington Street apartment.  The video was directed by John Sayles, who later made one of the greatest baseball movies ever, Eight Men Out, depicting the Black Sox Scandal of 1919, an early test of the game’s morality.

And years later, I came to know a Hoboken woman named Maria Pepe, who as a little girl had tested the national pastime’s sense of fairness.  In 1972, Maria was 11 years old and one of the first girls to play Little League, yet she was thrown off her team after three games because Little League threatened to revoke Hoboken’s charter.  Maria would challenge—and win—her case in court, allowing girls to participate in their programs and leading to the creation of girls softball leagues.  Her actions benefited millions of young girls.

When I invited Maria to speak to a fourth grade class at the Yogi Berra Museum & Learning Center several years ago, she told of how much baseball meant to her as a carefree kid playing with her peers, gender notwithstanding.  “I felt like any kid in Hoboken, playing the game I loved,” she said.

When the court case was settled, Maria was too old to continue playing in the league, but she had advanced the idea of equality and opportunity in society.  And fittingly it came through baseball, America’s great agent of social change whose long-ago humble origins were rooted in her hometown.

Dave Kaplan, a former Hoboken resident, is the director of the Yogi Berra Museum & Learning Center on the campus of Montclair State University.