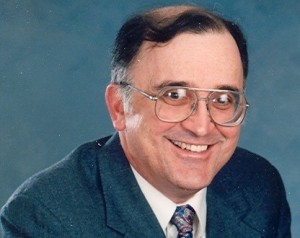 There are 35 people enshrined in the National Baseball Hall of Fame for their contributions to the black side of segregated major league baseball that existed prior to its integration in 1947.  One of the plaques honors a woman, Newark Eagles owner Effa Manley.  She is cited as “a trailblazing owner and tireless crusader in the civil rights movement” who won over local fans by making her team an integral part of the city’s black community while earning “the respect of her players and fellow owners.”  The inscription omits the fact that, as an outsider in the “boys’ club” of baseball, she often had to get respect by unleashing her sharp tongue and sticking to her uncompromising standards.  It’s not coincidental that she’s the only woman in the Hall – she’s one of the few women in the majors, either white or black, who have had any real power. 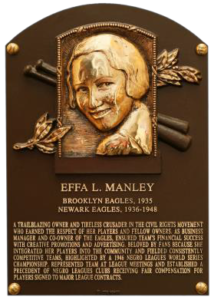 Born in 1897, Effa Manley married the well-off Abraham Manley in 1933.  A devout baseball fan, his money provided the couple’s entrée to team ownership in the Negro National League.  But Effa also liked baseball, enjoyed public recognition, and had the talent her husband didn’t for the administrative side of ownership.  Their roles evolved to allow each to work from strength:  Abe travelled with the team and scouted players while Effa was the business manager and, increasingly, the Eagles’ public voice.

After one season in Brooklyn the Manleys concluded that Newark, with lots of fans and less competition from other teams, made a better home, and moved the Eagles there in 1936.   There Effa made the team and herself institutions in the Newark black community.  Before baseball she had helped organize a famous boycott of stores in Harlem that would not employ blacks in meaningful jobs.  In Newark the Eagles often played benefits for African-American organizations, and the players became celebrities in the black community.  Effa was an NAACP official and lobbied for a Federal anti-lynching law by selling “Stop Lynching” buttons at Eagles games.

The Manleys produced perennially strong squads, although the Negro National League pennant eluded them until 1946, when the Eagles finished first and then won the Negro World Series.  But the integration of the white major leagues, beginning with the debut of Jackie Robinson in 1947, drew black fans away from the Negro Leagues and set their death spiral in motion.  In 1948 the Manleys sold the Eagles, which would seem to have ended Effa’s presence in black baseball.  But renewed interest in the black leagues in the 1970’s found her one of the few owners still alive, and she granted several interviews to bring the old days back to life.  She also began campaigning for the inclusion of Negro Leaguers in the Hall of Fame.  In 2006, 23 years after her death, she joined that select group.

Never one to avoid disputes, late in life Mrs. Manley began asserting that while she had lived her entire life as a black woman she was, in fact, Caucasian, the product of an affair between her white mother (who was married to a black man) and her mother’s white employer.  Some American Indian ancestry gave her a skin hue similar to that of a light-skinned African American.  In her day she was the subject of rumors that she was actually white, but her dedicated actions on behalf of the race among which she lived drowned them out.  No one now can definitively prove or disprove her claim – Mrs. Manley left one last controversy.

Dr. Lawrence Hogan, Emeritus Professor of History at Union County College, Cranford, NJ, is recognized nationally for his publications, teaching, public presentations, documentary, exhibit and historical preservation work in the field of black baseball history. Most recently he is the author of The Forgotten History of African American Baseball: Slavery Times, Jim Crow, the Negro Leagues (ABC Clio/Praeger, January, 2014).  He can be reached at benhogan6144@aol.com and on Facebook atwww.facebook.com/Dr.LawrenceD.Hogan.

James Overmyer is a Negro Leagues baseball researcher and writer, author of Queen of the Negro Leagues:  Effa Manley and the Newark Eagles, and a contributing writer to several books, including Shades of Glory, a history of black baseball in America.  He also has a forthcoming book on the Atlantic City Bacharach Giants, a member of the first Eastern black major league.