A Reflection on Bordentown

Memories of the Manual Training and Industrial School at Bordentown

The Manual Training and Industrial School [MTIS] was established in 1886 by one Reverend Walter Rice in the city of Bordentown, NJ. “The school, which was a boarding, vocational junior and senior high school, was the only one of its type in New Jersey and in this section of the country. In a sense, it was an alternative school that provided a choice other than public school or no further schooling at all. It was possible for more than four hundred Black children annually to receive education and strict discipline. The school protected the youngsters from the many social dangers of the city streets inculcating in them high standards of citizenship.”1 The school closed in 1955. A definitive history of the school can be attained in MTIS graduate Ezola Bolden Adams’ Ph.D. dissertation.

It was the year 1948 that I, at age 13, became a student at MTIS. It was for me indeed a most important time for it marked the beginning of five years of maturation built upon the firm but caring foundation provided by my mother. I entered the institution, like other youngsters, ripe for the guidance and education that was to undergird our lives for the next several years. Ours was an ordered, safe (away from home), regimented campus life. 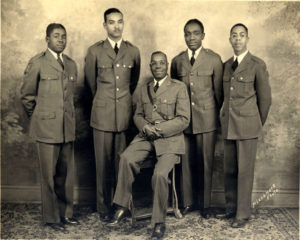 The Bordentown School, Courtesy of the NJ State Archives. Shown on Diversity page.

My initial desire to go to “Bordentown” (as the institution was, and is, still generally called), came from a rather mundane experience. James Bolden, an MTIS student, was home and wore his school uniform to Sunday church service. The uniform of military style was worn on prescribed days of the week and on specific occasions. I saw “that uniform” and immediately wanted to attend the school. My sister, a church acquaintance of James’s sister Ezola (also an MTIS student), had gained permission to enroll in the coming fall. Having been so impressed by the uniform, I prevailed upon “Mama” to permit me to go also. Thus began the rich experiences of which I write.

The campus of Bordentown was well designed and always immaculately maintained. As a means of helping to defray some of the maintenance costs, each student was assigned a half-day of work per week. Work assignments changed every six weeks.  Girls might help prepare and serve teachers’ meals or work in the campus laundry. Boys might operate and maintain dormitory heating systems (boilers), or work as assistants in the main dining facility kitchen. I recall shucking corn for the chickens and cutting asparagus in the huge garden. There were a variety of work assignments, many of which also served as training for alternative employment after graduation, until a position in one’s chosen trade became available. The girls’ and boys’ dormitories were separated by a large green space that defined the center of the campus around which the other buildings and activities emanated.

The campus was our home away from home from September to June except for the Christmas break. The Academic and Trade evaluations were based on a six-week marking period. A sufficiently high level of performance put one’s name on the Merit List. Merit List attainment was rewarded with a weekend home. My name graced the list on several occasions.

Always prevalent was the necessity for the institution to maintain a healthy separation of males and females (teenagers and blossoming adults).  Other than going to classes and eating together in the Dining Hall, there was no fraternization between boys and girls – yet, there were boyfriends and girlfriends. Those relationships were privately and warmly maintained partially by what was called a “local,” a love note folded into a one-inch square and passed to each other usually during meal time. In addition, after lunch or dinner as your girlfriend returned to her side of the campus and dormitory, you would wave to her and cross your arms across your chest signaling, “I love you, do you love me?” Her return of crossed arms meant, “Yes, I love you, too.”

On Saturday mornings, the girls were permitted to walk to the town of Bordentown for minor shopping. If you had a girlfriend, she might (hopefully), bring you a couple of cream donuts which you would get during the lunch meal. This was a kind of favored act worthy of bragging about to others less fortunate. A number of meaningful, long-lasting relationships did ensue on our campus. James Small and Cassandra Baskerville will celebrate their 60th wedding anniversary on May 22, 2014. 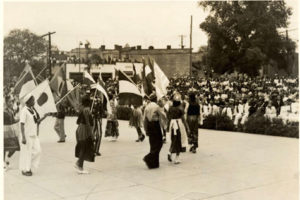 In addition to academics and trade education, there were regularly scheduled programs of social enlightenment, e.g. various lectures or musical performances and plays in the Chapel (a small auditorium). We also enjoyed an occasional, wellchaperoned dance in the specially decorated gymnasium.

The school maintained an exquisite choir that enjoyed a fine reputation throughout much of New Jersey and a few cities in Pennsylvania and New York. Our concerts usually ended with a rousing rendition of the “Battle Hymn of the Republic,” which always brought the house down.

A highlight of my four-and-a-half years in the choir occurred in my senior year. I was asked and honored to conduct the Christmas rendition of Handel’s Messiah. In addition to conducting, I sang the four bass solos. At the end of the concert, Mrs. Grant, one of our major teachers, rushed to the front to greet and praise my performance. My mother had come to see her son perform and was equally proud. Wow!!!

Parents frequently visited us on Sundays. We strolled the campus and enjoyed a picnic lunch they had brought. Having a few home-cooked morsels to savor and pinch on during the week was surely a joy.

Through the years, our academic and trade learning were graced with an all-Black cadre of teachers and staff, educated at the best institutions. They were at MTIS to, in turn, educate an all-Black student body who otherwise might not, or would not, have had an academic opportunity. The sense of determination, dedication, and caring each staff member exhibited was outstanding. An example of caring staff follows: One Saturday another student and I decided to hike along the edge of the Delaware River. Along the way, we came upon a wooden crate half submerged. Curious, we looked in the slated crate to find it contained several large fish. Being 14 or 15 years old and inexperienced at such a discovery, we took one of the fish, put it in a box we found nearby, and proceeded back to the campus. We had decided to take it to the kitchen to see if Chef Powell would cook it for us. He told us that we had taken the fish out of someone’s trap. Surprise! However, Chef Powell said he would cook our find: “Come back in an hour”. We did and he presented us with a pan containing the most beautifully baked and colorfully garnished 15” fish. We were hugely grateful and delighted. He added, to our delight, a loaf of bread. To the dorm we went to dine on our prize and share with others.

As with all high school-level education, ours was required to include physical education. While the girls engaged in regularly scheduled gym class, the boys’ ongoing military regimentation and structure included regularly scheduled drill practice. I immensely disliked drilling (marching) and once I became a lieutenant in my senior year, I cunningly used that status to avoid it. Major Daniels, the top commandant, stopped me one evening as I was walking to the dining hall. He asked if I had been going to drill practice. I replied that I had not. He said, “If you want to graduate, you had best begin.” My cunningness had expired, the gig was up. Not following the institution’s rules had consequences.

The question arises: By attending an all-Black (Negro) school, was our education lacking relative to being prepared to engage the broader society? I can say categorically that it was not. I strongly doubt that any of us missed anything substantial in our overall societal development. The overall education we received assured that we did not. Race was not expressly emphasized nor taught to us. We were not taught that we were different. Our own experience of living in the broader society, both individually and collectively prior to our MTIS experience, taught that. What we received was a solid academic education and a trade sufficient for going on to college or pursuing a livelihood in one’s chosen avocation.

Academically, one could choose to follow the general course or the college course. Those following the college course took advanced courses in mathematics and the sciences, and a language, Spanish. As a fairly ambitious student, I followed the latter. I went on to Howard University to pursue a Bachelor of Architecture degree and had a career in the profession mostly as a college administrator and professor. I later earned a Doctor of Architecture degree at the University of Michigan.

The love and fondness of our school and what it gave us in a very large sense flourishes ‘til today – it resulted in the initiation of the MTIS “Social Club.” Two alumni, namely Betty Griffith Hunter and Lionel Hunter (he of my class), initiated the Club in 1992. The basic purpose was to create a vehicle by which an annual reunion could be held. The reunion is held on “our” campus in late July. It remains a means by which we hold onto and promote the memory of our unique institution, The Manual Training and Industrial School, “Old Ironsides.” The Club meets three to four times a year in the late spring to plan for the reunion and spend a few precious hours together reminiscing of days gone by.

In retrospect and with all things considered, ours was a marvelous experience!

1. Ezola Bolden Adams, “The Role and Function of the Manual Training School at Bordentown as an Alternative School, 1915-1955,” (EdD Dissertation, Rutgers University, 1977) 10.

Arthur L. Symes earned a Bachelor of Architecture degree from Howard University and a Doctor of Architecture at the University of Michigan. He spent most of his career as an administrator of educational entities, the last being nine years as Dean of the School of Architecture at Southern University. Art’s latest endeavor of seven years has been that of actor for TV commercials. As a stone sculptor he has done a carving of the front entrance of the Boys New Building at the MTIS.