A Moment at Monmouth 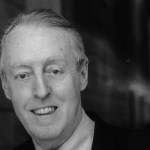 One of the most perilous – and least known – crises of the American Revolution occurred on blazingly hot June 28, 1778 in the sandy pine forest near the town of Monmouth Court House (now Freehold).  General George Washington was pursuing the British Army as it retreated from Philadelphia to New York.  His army’s 2,200 man advance guard, led by Major General Charles Lee, had orders to attack the British rear guard as they resumed their march.  Washington would join the battle with his 5,600 men and score a smashing victory that would do wonders for American morale after the winter ordeal the troops had endured at Valley Forge. 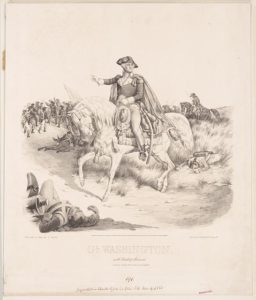 Washington at the Battle of Monmouth. Courtesy of Library of Congress, LC-DIG-pga-08288.

By noon, Washington was close enough to strain his ears for the sound of battle.  But there were none, beyond a half dozen tantalizing cannon shots followed by the scattered barks of muskets.  Suddenly a lone civilian appeared on the road and told him General Lee was retreating!  Washington refused to believe it.  Within minutes he met two of Lee’s regiments staggering with exhaustion in the terrific heat.  They confirmed the incredible news: Lee’s whole advanced corps was in disorderly, panicky retreat.  Minutes later, Lee himself confirmed this dismaying fact.  The British-born general had lost his nerve. He did not believe the Americans could face British regulars in a face-to-face clash.

Next, one of Washington’s aides rode up to shout that the entire British army was advancing in battle formation and was less than 15 minutes away!  For a terrible moment, Washington sat silent in his saddle, totally stunned.  He knew next to nothing about the terrain around him.  The stage was set for a rout that would destroy the Continental Army and quite possibly end the war.

Another aide rushed to his side with a lieutenant colonel from one of the retreating regiments.  The man’s family owned much of the nearby land.  He knew the local geography and swiftly described it.  Within ten minutes, Washington had his men positioned on nearby hills and behind hedgerows, his artillery unlimbered and waiting for the British attack.

For the next four hours, the Battle of Monmouth raged.  Again and again Washington’s men proved they could face fierce British assaults without wavering.  The ground in front of the American battle line was carpeted with dead and dying red-coated infantry.  As darkness fell, the British retreated in confusion.

On July 4, in New Brunswick, General Washington wrote a letter to his brother, John Augustine Washington, telling him about the battle.  At that moment of peril, when he had unexpectedly found the lieutenant colonel who described the terrain, Washington said he had felt the presence of “that bountiful Providence which has never failed us in our hour of distress.” He realized he and his army were in a place that was all but perfect for defense.  It was one of the few times Washington revealed this sense of God’s mysterious role in the struggle for America’s independence.

Thomas Fleming received the Governor Hughes Award for Lifetime Achievement in New Jersey History in 2007. His best selling novel Liberty Tavern is set in Monmouth County during the American Revolution.